The National Curriculum: A Critique, edited by Chris Berg, published by the IPA

A timely and invaluable monograph, The National Curriculum: A critique, has just been released by the Institute of Public Affairs in the context of their ongoing Foundations of Western Civilization Program. As Chris Berg, the editor, says in his introduction,

The release of the federal government’s national curriculum gives us an opportunity to take stock of how Australia sees itself, its role in the world, and its position in the grand sweep of history – in other words, how it imagines itself not just as a nation, but as part of a civilisation.

Alas, the way Australia sees itself, according the analysis of the writers in this book, is pretty dismal. 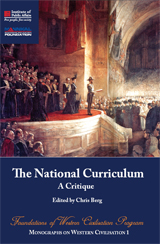 It would appear that almost all the conventional and traditional understanding that most of us have for the origins of the uniqueness of Western Civilisation and the qualities that Australia has inherited and shares with other western societies, is almost completely absent. Worse, this understanding and these qualities appear to be wilfully and deliberately ignored in this shiny new curriculum. Antonio Gramsci in his grave would be thrilled beyond belief. Conservatives should be horrified.

The book is organized as a set of six essays on particular areas of the syllabus by six writers.

Greg Melleuish takes a swipe at the history syllabus and concludes that it is a mishmash of disconnected study areas with no “organizing principle”, leaving the subject areas open to arbitrariness and prejudice. In this way, year nine students can choose in depth studies of the Ottoman Empire followed by Polynesian expansion, followed by a study of Spanish conquest. This leads, as Melleuish puts it, to human history of the past ten thousand years reaching its climax with AC/DC and Kylie Minogue.

Richard Allsop takes a closer look at Australian History, announcing the sad news that in less than 30 years Victorian students taking Year 12 history has declined from 42 percent to 5 percent. It seems students like facts. This syllabus wants to focus on “method rather than substance, on developing skills rather than imparting knowledge”. Australian exceptionalism is ignored, or avoided –– forget that Australia was, before Federation, one of the richest countries on Earth.

Augusto Zimmermann takes to task the way the syllabus ignores concepts like the separation of powers or the Westminster system, and only passingly touches on the Magna Carta, the 1688 Glorious Revolution or the American Revolution. Unsurprisingly, the curriculum will thus give students the impression that freedom and human rights only began with the United Nations.

Barry Spurr shows how English has been corralled into po-mo gibberish. Spurr finds the mandated imperatives in the new English curriculum as “platitudinous, philosophically vacuous-unsubstantiated feel-good rhapsody”. He astutely observes that the academic study of English language and literature –– the discipline of English –– has been “transmuted into an agent of social change”. Discipline in the study of language is absent. Further, Spurr sees the gutting of the greatest poets as “cultural philistinism, indeed barbarism on a grand scale.”

David Daintree tackles the issue of our Christian heritage and the importance of the Bible as a reference point to our cultural literacy. The most perverse aspect of this new syllabus is that over the 2000 years of European history, Christianity and its contribution is not specifically mentioned; as Daintree observes, there is “deliberate, pointed, tendentious and outrageous silence”.

To finish off, Julie Novak gives us an analysis of the failure of the new curriculum to explain Australia’s prosperity by excluding any explanation that involves free markets, enterprise or the capitalistic system. It reminds this reviewer that this tendency has already happened with disastrous results in France and Germany. Novak finds the new curriculum does not recognise the role economics plays in our historical development and when mentioned is largely negative. She concludes that students will not be able to understand our economic achievements of the past, nor those of the present, and will be “unable to capitalise on the exciting economic opportunities that lie ahead”.

This book is important. Its aim is to look at the national curriculum and to see how much it explains the foundations of Western Civilisation to our children. Clearly, it fails. If it is not stopped or changed, we will fail our children utterly in developing their understanding of themselves and their society.