Israel’s Right To Hit Back

Hamas and Israel are at war again.  Once more the sirens scream, children are in underground shelters instead of classrooms or their beds. Once more Israel has had to defend its people from  Jew-hating, genocidal neighbours. This time the war started after the kidnapping and murder of three Jewish teenagers, hardly more than children, on their way home after school. Look at their faces below and remember their names: Naftali Fraenkel, 16; Gilad Shaar, 16; Eyal Yifrach, 19.

The news of their murders met with very different responses from the Jewish and Arab communities. Jews were devastated and grief-stricken; Palestinians jubilant. As happened in the hours after the 9/11 attacks, Palestinians celebrated by ululating and giving candy to strangers, goading Israelis with songs, videos and posters, mocking their grief and threatening more kidnappings.  The teens’ murderers were lauded as heroes and lionised by the Palestinian street.

Official Israeli attempts to apprehend the suspected murderers were thwarted by the Arab population. The suspects, known Hamas operatives, disappeared from their homes immediately after this bestial crime. Their actions, while officially disowned by Hamas, are actively supported and encouraged by the leadership in Gaza and abroad. As I write this the killers remain at large.

Several days later, an Israeli-Arab teen, 16-year-old Mohammed Abu Khdeir, was kidnapped and burnt, with forensic evidence suggesting he was set alight while still alive. It appears that a group of Israeli Jewish youths, some of them minors, perpetrated a freelance act of revenge. The suspects were found and arrested within several days and are now in Israeli custody awaiting trial.

Contrast the different reactions: Unlike the Arab celebration of three young lives snuffed out, news of this grisly murder shocked and outraged Israelis.  Prime Minister Netanyahu called the dead teenager’s bereaved parents with condolences and assurances of  justice; mothers of the murdered Jewish teenagers called Mohammed’s mother with expressions of support and shared grief; groups of Jewish Israelis gathered in front of Mohammed’s home to voice their sympathy and support.

After Israeli intelligence services established direct evidence of Hamas’ involvement in the kidnapping and murder of the Jewish boys, Israel declared it would bear the consequences of its actions. Long before, and during, the search for the killers of the Jewish victims, Hamas continued to fire rockets at Israeli towns, further inflaming the already tense situation. In its foundation charter, Hamas, a recognised terrorist organisation, proclaimed openly genocidal political aims: the  destruction of Israel and the extermination of Jews.

“…Hamas has been looking forward to implement Allah’s promise whatever time it might take. The prophet, prayer and peace be upon him, said: The time will not come until Muslims will fight the Jews (and kill them); until the Jews hide behind rocks and trees, which will cry: O Muslim! there is a Jew hiding behind me, come on and kill him! This will not apply to the Gharqad, which is a Jewish tree (cited by Bukhari and Muslim).” 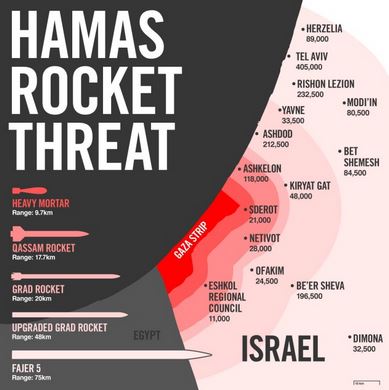 True to its word, Hamas has fired thousands of unguided rockets into Israel over several years. The psychological and social consequences of these unceasing barrages are severe, although the physical damage has been, by sheer luck, limited.  Imagine sending your children to school or to kindergarten and not know if they will  come home or, indeed, whether there will be a home left standing when the day is done.

Israelis have decided “enough is enough” and have launched Operation Protective Edge, yet another operation designed to stop the rockets, which are fired with the explicit intention of harming Israeli civilians. The Israeli Defence Force (IDF) has responded with strikes on known terrorist hideouts, rocket-production factories, weapons caches, underground smuggling  tunnels and the homes of Hamas leaders and their military commanders.

Before and during actions, the IDF goes to extraordinary lengths to safeguard civilians. No other army routinely contacts residents of buildings via mobile phone and SMS and warns them to evacuate. In doing so, the IDF loses the tactical advantages of  surprise and secrecy while recognising the moral imperative. Hamas, true to its murderous self and keen to use bodies for propaganda purposes, routinely tries to prevent civilians from fleeing targeted areas.

The chivalrous notion of not harming an enemy’s non-combatants began to fade many years ago, with the German zeppelin attacks on London during the Great War probably marking the official watershed. Hamas and its spiritual brothers in the PLO and Hezbollah have extended that concept: in their endless war against Jews they deliberately maximise their own civilian casualties in order to claim the status of victims of Jewish cruelty as they fish for the world’s sympathy. As Lenin put it, “The worse things are, the better it is for us.”

Hamas and Hezbollah hide their fighters and materiel amongst women and children, in hospitals and schools. This tactic is so effective, works so well against a morally sane opposition, that it has been copied by others, most recently and notably by Russians in their aggression against Ukraine. The terrorist concept of the human shield is a logical extension of “asymmetrical warfare” — the polite way of describing terrorism directed against a enemy state, its army, infrastructure and, most important, its civilian population. Now we are seeing the doctrine’s further extension as, purely for propaganda reasons, terrorists quite deliberately inflate casualties amongst their own civilian populations. Command centres are located in hospital basements, rockets launched from densely populated residential buildings and ambulances deployed as troop carriers. Then, when the IDF announces its intention to strike, civilians are prevented  from fleeing the target zone.

After amassing the civilian casualties they have engineered,  spokesmen for Hamas and its ilk complain for the TV cameras about “Israeli brutality”. They accuse Israel of genocide and wrap themselves in the cloak of helpless victimhood. Needless to say, the international left, the Muslim world and a spineless UN quickly respond to the cues and denounce Israel for the “disproportional and excessive” use of force.

Israel is involved in an existential struggle, surrounded by nations that openly threaten annihilation and regard the Jewish State’s very existence as “illegitimate”.  Israelis are forced to live under constant rocket bombardment. At the same time,  Israel is the only nation denied, by the UN and the “progressive humanity”, the right to self-defence. Israel’s battle to survive is, by virtue of geography, also European civilisation’s — a shield against the homicidal strains of militant Islam now rampaging through Syria and Iraq. This shield is being continuously eroded by the treachery, short-sightedness and cowardice of the international left. As the American social philosopher Eric Hoffer noted, “The Jews are peculiar people. What is allowed to everyone is not allowed to them …. everyone expects the Jews to be the only real Christians.”

When Britain was threatened by annihilation during the Blitz, nobody thought twice about returning the favour by bombing Germany, thereby inflicting heavy civilian casualties. Dresden, a non-military target overflowing with refugees fleeing the Soviet advance, was ruthlessly firebombed, causing as many as 50,000 civilian deaths in the resulting firestorm.

Imagine a German hausfrau, bandaged, bloodied, holding a small wounded child in her arms, crying as she accuses British “barbarians” of cruelty and war crimes. Was the destruction surrounding her Churchill’s fault or Hitler’s? Was it a British war crime or a legitimate response to indiscriminate Nazi aggression? Our fictional hausfrau would certainly qualify as a civilian victim, but was a casualty of the “heartless” British or of the insane Nazis? Later, much later, the ethics and efficacy of Dresden’s gutting were discussed and debated. But can anyone seriously imagine such a public argument taking place while hostilities continued? Can anyone picture newsreel footage of that hausfrau being projected onto the screens of British cinemas in a calculated bid for British sympathy as British soldiers continue to lay down their lives on the battlefield?

Now imagine a Palestinian woman, bandaged, bloodied, holding a small wounded child in her arms, crying and accusing Israeli “barbarians” of cruelty and war crimes. Is it Israel’s fault or Hamas’s? Is it an Israeli war crime or a legitimate response to Hamas aggression, which put this woman in harm’s way? She is a victim, no doubt about it, but is she a victim of Israel’s actions in protecting itsown people, or is she the victim of the insane policies of Hamas, whose brave “militants” use her and her family as human shields?

The bombing of Dresden, an arts and cultural centre of mediaeval Europe, resulted in what various estimates put as high as 45 000 civilian casualties. Was it disproportionate? Bear in mind that the British, unlike standard Israeli operational procedure, dropped no leaflets urging civilians to flee.

The US decision to drop an atomic bomb on  Hiroshima was made with the explicit intention of terrorising the Japanese into capitulating and to save the lives of half a million invading Americans who would otherwise have encountered a “never surrender”  resistance on the part of both the military and civilian populations. Japan’s refusal to surrender after the Hiroshima blast led a few days later to the destruction of Nagasaki. The fact that almost 200,000 civilian lives were lost and tens of thousands sentenced to a lifetime’s suffering from radiation sickness bothered no critics at the time. Were those bombings disproportionate? The Americans, unlike the Israelis, issued no warnings urging Japanese civilians to flee.

In both WWII examples the powerful motivator of mass slaughter by the Allies was  revenge. For the UK it was payback for the civilian casualties and  devastation caused by the Blitz. For the US it was driven by the outrage at the  unprovoked attack on Pearl Harbour and countless Japanese war crimes. Nobody was surprised that the British and Americans used all possible means to overcome their enemies. Yet this privilege is denied the Jewish State.

Why do we see such outrage only when Jews defend themselves?

The world’s concern with the self-inflicted Palestinian suffering gives their terrorist organisations the presumed right to bombard, kidnap, torture, shoot and kill Jews with impunity for no other reason than that the targets are Jews, who are not supposed to shoot back, as other nations and peoples are allowed to do.

Shakespeare said it for an old and tired Jew called Shylock:

Shylock’s words remain as true today as then. After the horrors of the Holocaust were revealed, world Jewry declared, ”Never again!” Modern Israel is the epitome of this determination.

The millennia of the Jew as helpless victim is over. Get used to it.

How They Made a Pyre of the Bush