Last night I had the privilege of seeing what must be one of the worst science fiction movies ever made.

Before you get excited, Skyline isn’t ‘worst movie’ in the way that some sci-fi movies are ‘worst movie’. Some of the worst sci-fi movies I’ve ever seen are actually classics in their own right: The Green Slime (1968), Robot Monster (1953) and a film called The Wizard of Mars (1965) which I have seen not once but twice, both times on TV in the early hours of the morning, and which was so bizarre that I wondered if I had dreamt it.

But these little gems had much to recommend them. First and most importantly, they were side-splittingly funny, especially when watched in the company of like-minded persons who could keep up a running commentary of ad-libs. 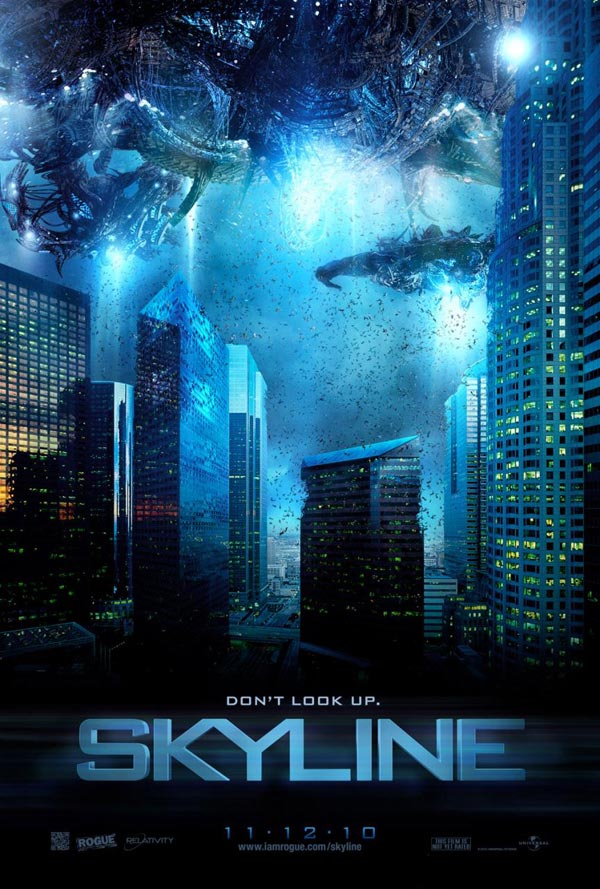 They were also incredibly low-budget – that films like this exist at all fills one with glorious optimism; a faith in the unquenchable human spirit that burns to create, no matter how painful the humiliations endured along the way.

Skyline meets neither of these criteria. To call it ‘lame’ might imply that there was some life in it somewhere; that the plot staggered along gamely on a literary Zimmer frame. Far from it. The plot, acting and storyline of Skyline are actually on life support, and the medical staff are looking eagerly at the off-switch. Don’t be fooled by the trailer: you’ve actually just seen all the best bits of the movie, and at a thrilling pace. If you decide to see the movie, you have to sit through the other eighty minutes of it. You will regret this.

The acting is bad. I will not name the actors here, because some of them may have hopes of greater things, and it would be unkind to link them with this particular crock. Suffice to say that the standard by which I used to measure bad acting in a mainstream big-budget movie – Keanu Reeves and Winona Ryder in Dracula (1992) – has now been redrawn.

What is Skyline about? I’m so glad you asked. Los Angeles, present day. A young couple meet up with their now-incredibly rich chum from days past, who lives in a tacky penthouse with a lot of dark wood veneer and IKEA sofas and a seriously stupid woman. We start out up with a core group of six unpleasant individuals: the young couple, the rich couple, a brunette bimbo photographer and a Sleazy Dude.

They have a wild party. Then the aliens come. They suck people up and eat their brains. They eat the Sleazy Dude. Panic. Then they eat the rich chum. More panic. There is a lot of running onto roofs, into car parks, getting stomped on by aliens and waving guns around, and some very bargain-basement special effects. The hero conveys emotion principally by wrinkling his brow slightly and standing with his mouth open. At one point, one of the characters says ‘This can’t go on forever’, and I thought: that’s true. But it certainly felt like it.

What I find hardest to forgive about Skyline is that it is boring. Everything in it is borrowed: the bottom left hand of the screen reads ‘Day One’, ‘Day Two’, etc (Independence Day). Huge jagged craft hang menacingly above a major city (District 9); later, when worldwide destruction occurs, we see other famous skylines with huge craft hanging menacingly above them (Independence Day, V, War of the Worlds, etc). There are chases with handheld camera (Cloverfield).There are tentacles. There are glowing lights. There are unrealistic brain stems. At one point a vast craft is struck by a nuclear warhead and disintegrates – but wait! Those pesky aliens possess advanced special effects technology, and are able to run the film backward to reassemble their ship!

2012 was also a lousy film, but it had fantastic special effects and a political agenda sufficiently irritating to keep me engaged. This movie, on the other hand, appears to have been made by people with $10 million to spare who are also on drugs and living pretty much in a world of their own. Don’t waste your time.

A brave man in Sydney