Special delivery parcels, containing hair-dryers, frozen chicken dinners and high-dose Valium tablets are being rushed out by our Foreign Affairs Department to all Australian Embassies and Consular offices around the world. Foreign diplomats and state officials of 140 countries are booking long service leave and planning extensive periods of “not being available”.Telephones in foreign ministries around the world are being taken off the hook.

In a remarkable feat of simultaneous up-staging and down-putting, Kevin Rudd managed to out-fox Julia Gillard by orchestrating a media event—a shoulder-to-shoulder stroll with the US Ambassador Bleich—before Gillard could capitalise on her press conference to announce Rudd’s appointment as the nation’s new Foreign Minister. It was classic Kevin. He was out of the diplomatic pouch and into his own media event quicker than you could say loyalty. Kevin’s certainly back. 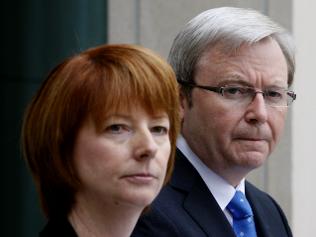 The next morning Julia Gillard was forced to remind us all that “she was the leader” and Kevin Rudd wouldn’t be a “one man band” and “as a former leader… he is entitled to respect.” Ah, yes— but it was a pity that he didn’t show m/s Gillard any—but it was just day-one. Things can only get worse. Just wait for the moment that Julia wants Kevin to do something that Kevin doesn’t want to do, or doesn’t agree with. Will that be worth watching? You bet.

According to Opposition front bench man, Andrew Robb. “He will take absolutely no notice of his new boss”. But Julia Gillard said on the ABC1 program, The Insiders, “ There will be involvement by the cabinet [but] ultimately, of course, I’m the leader.” Kevin Rudd certainly took absolutely no notice of Cabinet (nor Caucus), nor Stephen Smith, his predecessor, when he was Prime Minister so what on earth gives m/s Gillard the idea that he will take the slightest bit of notice of her now?

Then there is the host of countries that Kevin Rudd, as our Prime Minister, managed to offend or get off-side during the two and a half years of the Rudd experiment. Little, unimportant places like China, Japan, Indonesia and India, to say nothing of the African and Arab worlds. Remember our UN Security Council Seat-getting debacle? And the cooked up yarn about President George Bush (What’s the G20?).

Then there was that appalling business when Stephen Smith appointed Hugh Borrowman as Australia’s Ambassador to Germany. Kevin Rudd overturned Smith’s appointment on the apparent grounds that Hugh Borrowman didn’t speak German. Curiously the Foreign Affairs press release at the time clearly stated that Borrowman was “fluent in German”.

At the time of Rudd’s interference with Borrowman’s justified diplomatic appointment to Germany, the ABC reported:

The Prime Minister said Mr Borrowman was rejected for the Berlin post because his German skills were sub-standard. “When it comes to foreign diplomatic appointments, I do place priority on languages, as does the minister. And last time I looked at Germany, they speak German,” Mr Rudd told the ABC on Tuesday. [May 29 2009].

Rudd didn’t mention that he held a grudge against Hugh Borrowman, as Borrowman had the habit of standing up to Rudd. Not a clever career move to be hanging over your head during the Rudd ascendancy. Now Kevin’s back, senior and respected Australian diplomats are going to need some heavy-duty career protection. Let’s hope Julia Gillard is up to it.

He must be kidding! Julia Gillard and Kevin Rudd can’t even look each other in the eye, let alone get into a “light-cracking” embrace. And Rudd’s ability to hold a grudge, according to those who have experienced that pleasure, is legendary, if not ever-lasting.

And when the Green Godfather, Bob Brown, and Wee Willie Wilkie, the Greeen/ALP member from Tasmania start getting into their pet issues such as the war in Afghanistan and off-shore processing, their target will be none other that Kevin Rudd. How Julia manages to avoid getting sidelined in that little kafuffle will be interesting.

As memories come flooding back to the period when Kevin Rudd was ALP Opposition spokesman on Foreign Affairs; with his nightly appearances on television news; his taking media-command of the Iraq war and the Australian Wheat Board saga, it is difficult to picture just how Julia thinks that she will be able get a “crack of light” on what will be going on in Kevin’s world.

That world will include, of course, Kevin’s Mind which will be focused on what is best for Kevin. It will be centered on Washington and all of the think-tankery that that represents for his future prospects and of course New York, where his UN friends and contacts hang out. Just how Julia Gillard will manage this aspect of the Kevin Factor is anyone’s guess.

What is certain is that Kevin Rudd won’t be filling out daily forms and reports, that he demanded of his ministers when he was PM. The awful daily press instructions for the “topic of the day” all government ministers were in fear of deviation from, and the endless requests for permission to do things. No! Kevin will be having none of that nonsense.

At least one thing that we can look forward to is a Kevin Rudd encounter with Australia’s other former Labor Foreign Minister, Gareth Evans. Evans, who was/is famous for using 28 words when one would suffice, is also a serious contender for the title of Australia’s most verbose, loquacious and long-winded diplomat and savior of civilization. He talks a lot.

A seldom used word for this problem is “logorrhea”. It sounds a bit like a sexually-transmitted disease, but it’s not. It is a terrible verbal impediment whereby the sufferer doesn’t know when to shut up.

Alert all Foreign Ministers and world diplomats and poll-dancers — Kevin’s back!

18C is the Real Offence