As Michael Connor pointed out on Quadrant Online (“Business Class Radicals”), an Australian intellectual ‘2nd Eleven’ will be speaking at a symposium on ‘The History Wars Revisited’ at the Free University of Berlin in October.

On the surface it appears that the participants will be rehearsing their tired old lamentations about how some beastly people on the right dared to question the various mythic confabulations surrounding the history of indigenous Australians.

However, beneath the surface, they may actually be contributing to what amounts to a sinister form of Holocaust denial associated with the ongoing Historikerstreit (‘historians’ dispute’) over the nature and direction of German history that first convulsed Germany in the late 1980s. 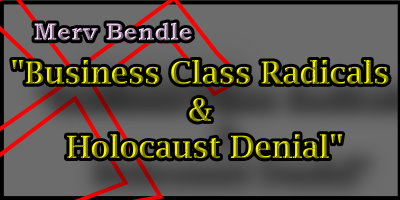 Those interested in this frequently vicious ‘History War’ can consult Forever In the Shadow of Hitler? (New York: Humanities Press, 1993). This provides an extensive selection of “original documents of the Historikerstreit, the controversy concerning the singularity of the Holocaust”.

As this description makes clear, the key issue at stake in the dispute was the singularity of the Holocaust and the desperate attempts continuously being made by certain German historians, politicians, and their supporters to relieve Germany’s burden of guilt by relativizing that hideous epoch-defining event in order to represent it as just another example of many genocidal crimes that have allegedly occurred, not just in Germany but around the world, including in Australia.

This revisionist objective can be achieved by encouraging ideologically committed and/or second-rate and opportunistic intellectuals to produce arguments that show that Germany ’merely’ followed other nations in committing genocide and that the German people can at least be partially exonerated for the ghastly crimes of the Nazi regime. Moreover, the Nazi regime itself is made to look less singularly murderous and pathological.

And of course the key to this strategy are the efforts – sponsored and otherwise – of cooperative intellectuals from other countries who labour away to provide examples of ‘genocide’ that their own countries have allegedly committed, and which can be used as exhibits to support the case that the Holocaust was in no way ‘singular’ but just a regrettable example of the perils all countries face and that Germany regrettably fell victim to.

Australian historians can contribute to this strategy of Holocaust denial in a number of ways. After all, they have demonstrated a fierce and unquenchable desire to portray the history of indigenous Australians in terms of alleged genocides perpetrated by white Australians, involving the ‘Black Wars’, the ‘Stolen Generations’, and other over-hyped alleged depredations.

Moreover, as leftists they are amenable to the Marxist-Leninist claim that genocide is an inevitable characteristic of liberal-democratic capitalist societies, and a good example of this approach is the deplorable book by the Australian New Left historian Ben Kiernan, Blood and Soil: A World History of Genocide, which is notable for representing Australia and other English-speaking countries as the most egregious exponents of genocide, dwarfing the Nazis and the Holocaust.

The irony is that their efforts to diminish the singular evil of the Holocaust aligns them with the most extreme elements of the far-right in Germany and Europe, who long for the day when they can rehabilitate the Nazi and fascist past. They should be worried about this alignment – and the implicit anti-Semitism of their position – but they aren’t because they believe they have a higher duty to denigrate their own society and the West in general.

Regrettably, Australian historians fall into this trap because they suffer profoundly from an inferiority complex and bad case of cultural cringe, arising principally from the fact that the history of their country stands as a beacon of progress and moderation in an age of barbarism, and consequently seems rather uninteresting in comparison to the great dramas that have engulfed most of the rest of the world. This lack of drama is especially galling for those who toy in a dilettantish fashion with the continental theories of Michel Foucault and Edward Said, as so many of our intellectuals do.

Ultimately, such intellectuals truly are a 2nd Eleven, making a pilgrimage to Berlin to give their little papers about their difficulties in Australia, pretending they’re in the same league as historians whose country really does have a problem to deal with.

An uncharitable observer might see them as a sad childish gang of wannabes, jumping up and down in front to the big kids, trying to get on their team, desperate to be taken seriously, screaming “pick me, pick me, we murder people by the millions too” – and the tragedy is that they don’t realize they and all of us are much better off being well out of that particular, monstrous, game.