In the very first – and best – season of Underbelly, there is a marvellous scene in one of the later episodes, when things have really gone downhill for both Carl Williams and the Moran family. 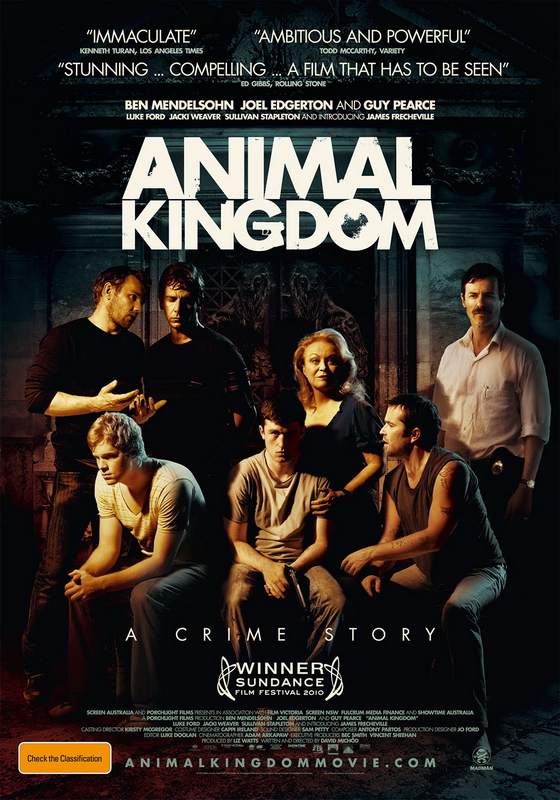 It’s when Keith Faure (or a character who bears a striking resemblance to him), played by Kim Gyngell, enters the scene. You can practically smell Gyngell; his character is an utter toerag – the lowest of bottom-feeders in the Melbourne gangland scene. That things have come to this – that people like this man are now involved with the so-called high end of gangster life – is very telling.

Animal Kingdom is, in effect, a trip into their world – the world of the bottom-feeders and lesser fry on the fringes of gangland Melbourne. The Cody family has its own faded but ruthless matriarch, a tenth-rate Judy Moran played with great control and discipline by Jackie Weaver. The other stellar performance comes from Ben Mendelsohn, whose character Pope is a man who has gone beyond redemption. Mendelsohn has to be seen to be believed; I really didn’t think he or Jackie Weaver had it in them, but it just goes to show.

The story is a gripping but ultimately hopeless playing-out of several themes: that crime does not pay; that crooks always come unstuck; and most painfully, that everything affects everyone else. The Codys drag others down with them – innocent bystanders get killed; Codys who try to go legit get murdered, either by police or by their own kind. The central character and narrator is the numb and already badly damaged Josh (James Frecheville), teenaged son of a single mother who dies of a heroin overdose while the two of them watch Deal or No Deal. Josh falls into the clutches of his grandmother Janine and her beloved sons: the insane Pope, the withdrawn Darren and the terminally coked-up Craig.

From there, things go steadily downhill. Enter Guy Pearce as a decent cop – a rarity in this movie; where all the other police (and the Codys’ solicitor, played with an entirely credible odiousness by Dan Wyllie) are involved in the drugs trade or revenge killings of their own. Incidentally, how nice to see a crime show made in Australia where no one has stuck-on facial hair or bad wigs: Guy Pearce’s ‘tache is all his own work. There are twists and turns and a really good (actually very shocking) surprise ending, which I will not spoil for you by revealing here.

This movie deserves all the plaudits it’s been receiving – and, like the real moustache, what a nice change to see a genuinely well-made and well-produced Australian film. It was also well-attended, and promises to continue to be so. There is nothing PC about this movie; there is no chai-latte inner-city angst or posing. It’s just a really hard but really good film, and – dare I say it? – a moral one.

The Right and Will to Defend Ourselves