Listening to ABC news and current affairs programs can be life-threatening.

Tuning into the usually extraordinarily banal ABC News Radio, to catch the latest on the BP offshore oil spill, up popped Wilson Tuckey delivering a parliamentary speech on, of all things renewable energy and reducing our carbon emissions. To say I nearly ran the car off the road would be an understatement. 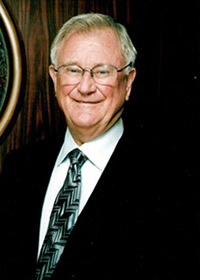 It was Wilson all right, but the thought did surface that this was a voice impersonator and it was all one of those clumsy ABC April fools jokes, running a month late. But it wasn’t and what he had to say, delivered in a quiet, measured way, made all the sense in the world. And he was talking about a paper he has written; Practical Solutions to Climate Change.

While not conceding for a moment that the Rudd/Flannery/Wong hysteria about End of Days human-induced climate change had converted Wilson — no, Wilson was stating what most climate realists would endorse — the need to reduce pollution and find better alternatives for the production of energy. Energy to produce electricity, energy to power motor vehicles, energy to drive industry and energy to sustain life on earth.

And what he was talking about, to some degree, was a project the nation could have spent some of the massive amounts of the Stimulus Package money on, or at least, part of it. And his plan was for the country to tap into the massive daily energy that is generated every 12 hours by the giant tidal surges of the Kimberley coastal region of Western Australia.

Tuckey quoted the World Energy Council in a 61-page document, which is available as a pdf on his website, that lists Australia as one of nine countries that has potential sites for huge tidal energy projects. Of particular interest are Walcott Inlet and Secure Bay, north of the Kimberley town of Derby.

What makes these two sites so attractive is that their surface or basin area is about 400 square kilometres, and these basins fill and empty with seawater, twice a day, through narrow entrances. The power of the seawater emptying and filling these bays, pounding through really narrow gaps, is breathtaking. Just these two Kimberley sites, Walcott Inlet and Secure Bay, have the potential to generate 4280 MW of electricity, according to the World Energy Council.

The great problem with harnessing electric power in the Kimberley has always been the difficulty of transmitting the electricity generated. The long distances to places where it can be used, such as Perth or the Eastern or Southern seaboards, would see the electricity dissipate before it reached its destination. Wilson Tuckey says that this problem has been solved by a system called HVDC — High Voltage Direct Current transmission. The largest HVDC transmission line in the world is currently in operation in Australia. BassLink which connects Victoria and Tasmania, via a cable under Bass Straight, uses the latest HVDC transmission technology.

Tuckey claims that the cost of constructing a 3000 MW HVDC link from the Kimberley to either Perth or Adelaide would be about $1.5 billion. He doesn’t venture the cost of building the generation plants, but a planned tidal generation system scheduled to be built in Korea is thought to be under $500 million. The 2500 ton Korean turbines (pictured) will be placed on the ocean floor and when the scheme is operational 300 turbines are expected to be working. 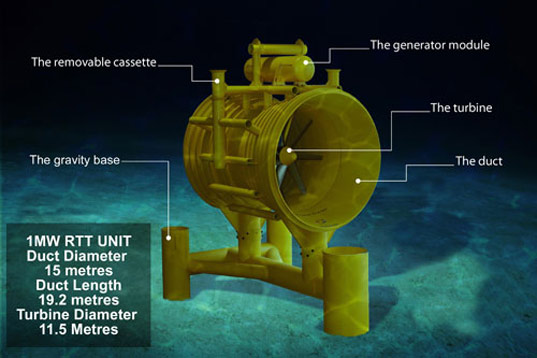 Tuckey points out that tidal power, unlike solar or wind electricity generation, is not subject to the fickle moods of the weather — sunny and windy days. It is a constant, being only influenced by sister Moon in its tidal range and timing. In Western Australia’s Kimberley region the difference between low and high tide is about 7 meters.

Wilson Tuckey also states that the European Union is looking at using HVDC transmission to possibly move vast amounts of solar-farm electricity produced in Egypt, Algeria and Morocco, into Europe. He points out that a HVDC grid crossing Australia from the Kimberley tidal scheme could also collect solar-produced electricity along the way from giant solar farms.

Australia has one of the most favourable desert areas for really intensive solar farm electricity generation but as with the Kimberley tidal scheme, distance from power grids is the problem. A HVDC power grid would solve that.

The first stage of his HVDC network and the harnessing of the Kimberley’s tidal power could have been undertaken for the money wasted on the Rudd government’s failed pink batts debacle. That’s about $2.9 billion (including the batts clean-up). The money saved if the government had used the Catholic Schools building system instead of the ridiculous State Education Department’s rip-off driven tendering scheme would possible have built a second tidal-power electric scheme.

Wilson Tuckey needs support for his idea, both from his parliamentary colleagues and from those who know about these things. It is the sort of concept Australia could once cope with — like the Kalgoorlie goldfields water pipeline, the Sydney Harbour Bridge and the Snowy Mountains hydro and irrigation scheme.

The Snowy Mountain Scheme, considered Australia’s greatest engineering feat, took 25 years to build, and was estimated to cost then (1949) $800 million. It was launched in 1949 by Ben Chifley, the Labor prime minister. What Chifley would have thought of today’s hollow, shallow men — goodness knows. What he would have thought of the batts, school-buildings and indigenous housing debacles, heaven knows.

The Snowy employed 100,000 workers from 30 countries, building 16 large dams and about 145 miles of mountain tunnels to power seven power stations. It currently produces 70% of Australia’s renewable energy for the eastern mainland grid and supplies the rapid response power needed for peak power and rush-hour periods for Sydney, Brisbane, Canberra, Melbourne and Adelaide.

Back in 1974 a conference on Energy Resources for Electric Power Generation estimated that the capital cost for building a generating facility at Secure Bay would be $400 million in 1974 dollars and that the electricity could be sold for 3.9 cents a kWh and earn an 8.5% return.

In a submission to the Garnaut Climate Change Review, Ivan Quail told Garnaut that there was tidal-power generating capacity in the Kimberley region to potentially supply six times Australia’s present electricity needs. In his submission Mr Quail pointed out that Secure Bay and Walcott Inlet are just two of fifty possible Kimberley tidal sites.

If feasible and economically sensible, the Kimberley tidal idea and a national HVDC electricity grid is something Tony Abbott should examine seriously. This could be the sort of “nation building” concept that our Dear Leader is constantly babbling on about but seems incapable of conceptualising, and following the batts, BER schools program and indigenous housing failures, would certainly be incapable of implementing.

And it’s come from Wilson Tuckey…never!

The Rich Get Richer. Good

Latham, the Right Replacement for Triggs