Alice and the Bozone Mystery

Of all the beasts that God allows
In the green and grassy fields of Warmerland,
We most of all dislike the cows;
Their noxious eructations should be banned.
Yes, we most of all dislike the cows;
Their bovine flatulence we just can’t stand!
Let’s drive them from our grassy land.
All the other naughty ruminants should go too.
We’ve given it a lot of thought. What else are we to do?
They must be exiled somewhere. Why not France?
Millions go there every year, if given half a chance.
We’re told it already has a few la vache qui rit,
Just the place to send the lot, hopefully for free!
[Chorus of Concerned Rabbits]

Down the Rabbit Hole

Alice was getting tired of sitting on the river bank with nothing to do. Once or twice she looked at her sister’s books. But she was not in the mood for The Young Person’s Guide to Reducing Your Carbon Footprint. Changing Your Behaviour to Save the Planet did not excite her either, especially on a hot summer’s day. There were too many funny diagrams and silly numbers inside. “Why is Charlotte so interested in them?” wondered Alice.

The humid weather made her feel sleepy and stupid. She used to make daisy chains, but daisies were no longer her thing. Was that a bird or a ringtone? Perhaps she had a message? She took a mobile phone from her backpack and was just about to check, when a White Rabbit with pink eyes suddenly appeared out of nowhere.

The Rabbit pulled a pocket watch out of his green fluoro-jacket. “We’ll be too late!” he said. “Time’s running out. It’s getting hotter!” He stopped near them and looked directly at Alice. Tapping his watch and waving what appeared to be a thermometer, he warned: “Beware Bozone!” How very remarkable.

The Rabbit then ran off towards the wood. Alice noticed something printed in big letters on the back of his jacket: “Save Our Planet! Climate Action NOW!” How odd, she thought. Why was everyone so worried about saving the planet? How could you save it? What a silly idea! And what on Earth was Bozone? She simply had to find out. 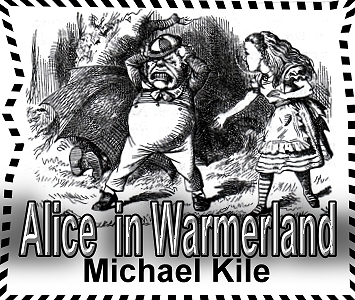 Alice jumped up quickly and ran after the Rabbit. “Alice! Where are you going? Alice!” called Charlotte. It was too late. She was already on the far side of the field. Alice reached the hedgerow just in time to see him enter a burrow. It was a very large burrow, she thought, as she peered over the edge.

The ground beneath her suddenly gave way. Alice began falling down what seemed like a very deep well. Down, down, down. She tried to make a frantic call her sister, but her mobile wouldn’t work underground. The Rabbit’s warning echoed through the burrow: “Tick-tock: time’s running out. We’ll be too late. Tick-tock: it’s getting hotter!”

What would happen next? Down, down, down. Would her fall never come to an end? “I wish I knew my longitude and latitude,” she said. “I must be near the centre of the Earth. Perhaps I shall come out in Australia or New Zealand? Oh, what nonsense I’m talking!”

After a very long time, the sides of the burrow became filled with computers, monitors, multi-coloured wires and flashing lights. Images of clouds appeared in all shapes and sizes on large screens. Alice couldn’t remember their names. She tried very hard, but soon gave up. “I wouldn’t know a strato-cumulus from nimbus, or even from cumulo-nimbus,” she sighed. “If Charlotte was here, she could help me”.

Alice began to hear voices too; angry voices. It was the strangest thing. Some kind of conflict was going on all around her. Complex equations were arguing with each other at frantic speed. “Let’s integrate!” cried one group. “No!” said another. “We want to differentiate, especially from you!” Improper factions struggled with proper ones; rational numbers were very upset with irrational ones. “We have nothing in common!” they yelled. “We don’t want to be with you lot!” It went on and on.

“What a day of revelations,” said someone. “Our databases are in a hopeless state. They’re worse than a dog’s breakfast. Thousands of dummy stations are in there. Why does the OpTotKrap sum-of-squares parameter keep going negative?”

“What’s supposed to happen here? How do I tell cooked numbers from uncooked numbers? Oh, there’s no ‘supposed’. I can make it all up, so I did!”

“Wait a second,” said another voice. “Explain it to me as if I’m twelve. They didn’t even bother to fudge their dodgy data to get the story lines? They just hard-coded hockey stick trends into their programs?”

“Yes, that’s exactly what they did. Something’s rotten in Warmerland. You can smell it in the air.”

Alice put her hands over her ears. It was worse than her worst nightmare. She felt she was trapped inside a giant computer. Silly questions were swirling all around her. Perhaps she could escape by giving the right answer to one of them?

But the questions kept changing. One moment it was: “How thick is the Bozone Layer? How much is too much? Will we ever be Bozone-neutral?” Next it was: “How do we hide the decline? Try a very artificial correction?  Apply fudge factors to our sludge simulations? Will that do the trick? If not, message me: ‘Ooooops!’”

It was so stressful. There was too much talk of fudge and sludge. Alice wished she was back on the riverbank with her sister.

Down, down, down. Thump! Thump! Alice found herself sitting in a pile of dry leaves. She was dazed, but unhurt. Her fall was finally over. Thank goodness. “I wonder where I am?” she said. Getting to her feet, she saw the White Rabbit hurrying down another passage.

“How late it’s getting!” he said, as he turned a corner. “Oh, my dear paws! Oh, my fur and whiskers! I’m in trouble. I’m in trouble. Oh, rabbits are such bunnies!” She followed the Rabbit as fast as she could, but again could not catch him.

Alice then entered a long burrow lit by a row of lights. There were three doors along each side and one at each end. She went down one side and up the other, but they were all locked. What should she do now? Would she ever get out?

Was that a voice behind one of them? It was peculiar sound. Surely it was a voice? Alice moved closer to the door. There was someone inside. Whoever it was didn’t sound happy.

“Who would be a pudding?” What an odd question. Alice noticed an alcove hidden near the door. Inside was a small glass table with a golden key on it. Alice tried the key and managed to open the door.

“Curiouser and curiouser!” she cried. There on another table was a large plate with a pudding on it. It wasn’t an ordinary pudding. It seemed to glow in the dim light. Alice was hungry after her fall and it looked delicious.

Currants had been arranged to form the letters “ETS” on the pudding’s golden crust. Whoever made it wasn’t very good at spelling, thought Alice. Perhaps they were in a hurry too, just like the Rabbit? Surely it should be “EATS”?

“Anyway, that’s what I’ll do. I’ll eat a piece and then go after that silly Rabbit again. I hope there are no onions in it. I don’t like them.”

She was about to cut a slice, when a thick, suety sort of voice spoke from somewhere under the pastry:

“Onions and bunions, corns and crabs,
Pigs and pepper, carrots and scabs,
Flamingos and gryphons,
Hedgehogs and pythons,
Lobsters and dodos,
Sluggards and hobos,
Beef and bottles, beer and bones,
Shall I give you a taste and end your groans?”

“If you’ve any of those things inside you, I’ll be groaning a lot more!” replied Alice. Lobster and carrots together might be digestible, but she couldn’t imagine eating hedgehog or hobo – ever!

“I can be any kind of pudding”, said Albert. “I can be anything from a plum pudding to a steak pudding. I’m a Magic Pudding, a cut-and-come again pudding. But I’m no humble pie!”

“If you really are a Magic Pudding, then why are you unhappy?” asked Alice.

“You’d be unhappy too, if everyone wanted a slice of you. But I’m not as unhappy as all the pudding-eaters will be when they try the latest Royal Recipe. There should be a law against cruelty to puddings. We have rights too, even in Warmerland”

“Warmerland? Is that where I am?”

“Yes. You are near Flatulencia, capital of the province of Eructacia.

“You’re in for a shock, girl. If Warmerland’s like Italy, it’s the Italy of Machiavelli.”

“I’ve heard of macaroni, spaghetti and ravioli, but not Machiavelli. And Albert, my name’s Alice, not girl.”

“OK, Alice. Welcome to our little kingdom. King Hot’s the big macaroni here. Remember to remember he’s got a temper. Queen Cool gets excited too. A lot of pudding-eaters lost their heads this year. They were all Bozone deniers.”

“Yes. I heard it in the Royal Kitchen. They chopped the rest up and fed the pieces to the King’s hounds.

“That’s awful! But why has the new recipe upset you?”

King Hot and Queen Cool wanted too much from me. You can’t make a good pudding with their ingredients. I tried to tell them but they wouldn’t listen. Prince Luke Warm helped me get away. I didn’t want to be their pie in the sky!

Everyone knows the proof of a pudding is in the eating. Could you stomach a dish made from the

Promises of a prime minister
Impossible to administer;
Flawed emissions trading schemes,
The product of alarmist dreams;
Manna for investment banks,
Military hardware, including tanks;
BMW four-wheel drives,
Honey looted from bee-hives;
Plots to change the rules,
Hatched by a ship of fools;
Cargo cult delusions,
Mani-bilong-skai illusions,
Papers on feedback loops,
Written for nincompoops;
Bozone hoofprint calculations,
From some rabbit’s hallucinations;
Formulae for global thermostats,
Hard to crack, even with cricket bats;
Remedies for bozonorexia nervosa,
Discovered by monks on Formosa;
And a vat of dodgy Royal Stew,
Favoured only by a few?”

“What an odd pudding you are!” replied Alice. “I don’t understand you. It’s all so confusing. Please explain, Albert.”

“We don’t have time, Alice. The King’s men and all his horses are after me – and now you. We have to go!” The Pudding was in such a panic Alice thought it best not to ask again, at least not now.

“Follow me,” said Albert. “We can escape if we go through the Old Growth Forest.”

Random Jottings in a Dark Season