If you’re wondering about whether to go and see the Coen brothers’ remake of True Grit, you might like to ponder the following.

1) Jeff Bridges is not John Wayne. Thankfully he doesn’t look like him, so this may bother you much less than you think. His Rooster Cogburn is much more of a villain than the Duke’s, and in his own way much more believable. 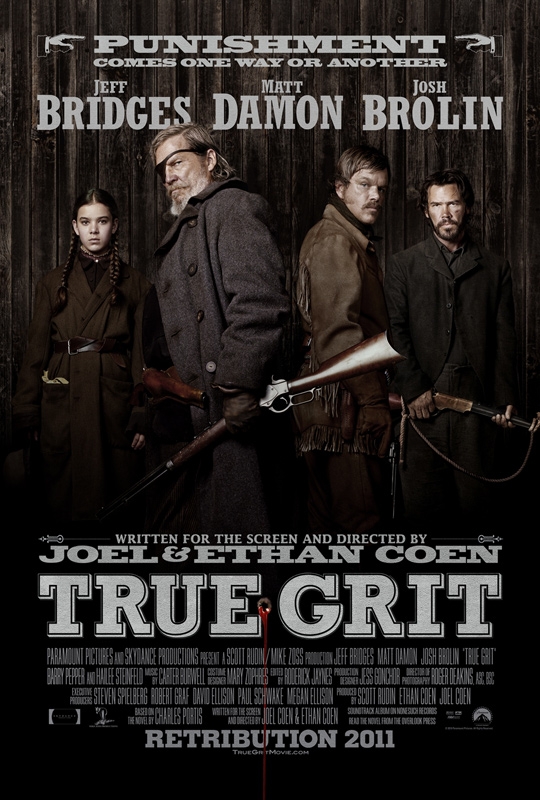 Like the Duke (and like Bridges’ role in The Men Who Stare At Goats), one suspects he may be playing himself to a large degree, notably in the drunk scenes, but that doesn’t do the movie any harm. There have been complaints from other reviewers about Bridges’ unintelligibility and mumbling, but he’s actually not that bad, and you will find that you get the gist of it. (In an odd way, it puts you in the other characters’ shoes; they probably don’t understand half of what he’s saying either, but that may actually be a good thing.)

2) Mattie Ross, the girl whose father has been killed and who seeks justice of the most cut-and-dried sort, is meant to be only 14 years old, and in this version she is played by the remarkable Hailee Steinfeld, who is not only 14 years old but is entirely convincing: a deadpan, hard-dealing and rather unlikeable girl with the black-and-white killer instinct of a young teenager. Anyone who has read any of the Laura Ingalls Wilder books has a rough idea of what it meant to be a 14 year old girl on the frontier (unlike anyone who ever watched Little House on the Prairie, who will have no idea at all: a more terrible adaptation of excellent material has never been seen.) There is not the slightest hint of flouncing, adorable gap-toothedness or saccharine in this movie, so be warned.

3) Those of you who find Matt Damon’s boyish good looks annoying will be pleased to find that he is unrecognizable. In fact, I didn’t even know it was him until I was half-way home afterwards and my sister mentioned it. The scene where he gives Mattie a hiding is absolutely light-years away from anything you’d ever imagine Matt Damon doing, so do be impressed.

Other unreconstructed aspects of this movie that Quadrant readers may enjoy are:

4) the history lesson: there’s nothing like seeing a society barely clinging to the fringes of the rule of law to make you appreciate and value that same rule of law;

5) the prevalence of heavy drinking, smoking, and eating cholesterol-laden food;

6) the use of the English language: the script is beautiful, and hearkens back to the quasi-Biblical speech of films like the Coens’ 1987 Raising Arizona;

7) the complete absence of sexual violence;

8) a travelling dentist clad in a bearskin, who also trades in dead bodies (actually I’m a bit less sure about the universal appeal of that one, but I know I appreciated it).

So is it worth the trip? Certainly True Grit is visually spectacular on the big screen, but I don’t think you’d lose much if you saw it on the small one (and that way you can switch the subtitles on, if Bridges gets too much for you).

A Gravy Train on Super Steroids