Over 25 years ago in the United States the National Commission on Excellence in Education issued its report “A Nation at Risk: The Imperative for National Reform”. It contained these chilling words:

If an unfriendly foreign power had attempted to impose on America the mediocre educational performance that exists today, we might well have viewed it as an act of war. As it stands we have allowed this to happen to ourselves”. Some decades later President George Bush Senior expressed similar concerns about what was happening in his nation’s schools when he spoke of the “soft bigotry of low expectations.

Dr Kevin Donnelly is one of a small group of local commentators who have worked assiduously over many years to demonstrate that Australia’s schools and universities have been no less immune to the pernicious effects of that tangled skein of woolly progressive ideology, neo-Marxist spite and envy, post-modernist nihilism and sheer self-interest that has infected the educational class in this country, along with its fellow travellers in the media, especially in the Fairfax Press and the Australian Broadcasting Corporation. 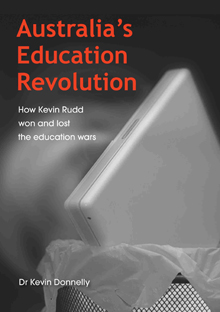 Dame Leonie Kramer provided leadership in the literacy debates of the 1980’s; in the 1990’s Professor David Pennington was a trenchant critic of Premier Joan Kirner’s Victorian Certificate of Education with its social engineering agenda. In similar vein Kevin Donnelly has been a tireless and brave gadfly on the rump of the educational body politic, as this timely collection of his writings attests.

When, in ages hence, scholars compile the history of education in the English-speaking world, they will have to address a number of conundrums when they deal with the present era. How will they explain what the British journalist Peter Hitchens in his recent book The Broken Compass despairingly refers to as “the Left’s visceral hatred of quality state education”? It is a sad irony that the legacy of the social democratic/progressive consensus is that for so many children born into the lower echelons of society, the state school as a vehicle for social mobility and intellectual development has been rendered impotent. In England the traditional grammar schools established by the 1944 Education Act have all but gone, victims of the Left’s dogma that academic selection is wrong, morally wrong, while selection by wealth, into private schools or through purchase of property in the zone or catchment area of a good state school, is deemed acceptable. The denizens of the education class and their allies, who are often themselves the beneficiaries of scholarships to private schools or a traditional high quality education at a selective grammar school, rail against elitism and preach the comprehensive ideal for other people’s children, but send their own children to independent schools or to schools open to them only because of their privileged knowledge of how the system works or because they can afford to buy a house in a favoured area. Such hypocrisy is repugnant but familiar, as Hitchens points out, to those who study the way of life of the ruling cadres in Marxist totalitarian states. Secondary School Number One in Soviet Moscow, Lenin High School in Havana, Mangyongdale Revolutionary School in Pyongyang may well have been or still are fine examples of state education at its best in their respective countries, but accessible only to the privileged few.

Her biographer A. N. Wilson records some remarks of Booker Prize-winning novelist Dame Iris Murdoch. “We want schooling to be demanding. We want children to be introduced to what is difficult, to mathematical concepts, to grammar, to language. This is so vitally important. And that is what the Labour Party has taken away from everyone. That is an act of great wickedness… But a mixed ability Latin class! Damn it, they wouldn’t choose a mixed-ability football team”. Dr Donnelly and I were fortunate to attend school at a time when the focus was clearly upon the transmission of knowledge, an Arnoldian initiation of the young into “the best that has been thought and written”. My own school in Glasgow may seem in retrospect to have been a bit of an educational boot camp, but my teachers were passionately committed to the development of the rational mind of their pupils through systematic and demanding study of those established disciplines which have traditionally contributed to what we call a liberal education.

The education class now sees schools as places of liberation, not of liberal education. The young must be “liberated” from the demands of a traditional curriculum, from competition which threatens self-esteem, from the teacher’s authority which compromises creativity, from the shackles of the Western cultural heritage which, of course, is inherently rotten and irrelevant to their personal and political needs. There has indeed been a revolution in our schools, pursued with the zeal and intolerance of revolutionaries everywhere, and with a relentlessness which brings to mind the turbulence of Mao’s People’s Republic rather than the groves of academia. Witness the education class’s obsession with change and innovation, the insistent revising and re-revising of curricula, the plethora of critiques of current pedagogical practice, the addictive quest for new and arcane terminology, the eagerness to leap upon the latest bandwagon which so often turns out to be a tumbrel. Little wonder is it that teachers are exhausted and perplexed by all that they are asked to do. The loss of deference in our society and authority in our schools means that they are among the few people who actually go to work in the morning with a sense of dread, dread of what some child may say or do to them in the course of the day. How they must long for the soothing balm of an educational conservative – “Don’t just do something; stand there!”

Despite the litany of ills perpetrated by the educational class and documented depressingly in this book, there is hope for a better future for our nation’s children. Australia has shown consistently that when it takes the pursuit of excellence seriously, it can win over and over again. The parallel reality is sport, where the dogged pursuit of success has brought results out of all proportion to the size of our population and the largesse of our economy. The secret has been that success in sport is seen as an end in itself, not as a means of social engineering, new age therapy or economic advancement, but a source of individual and national well-being and pride. We know how to identify and nurture outstanding sporting talent, but that does not mean that we ignore our duty to provide all of our young people with opportunities for participation and advancement. Sport in Australia has demonstrated that egalitarianism and elitism can flourish together and mutually feed one another. The model is already there and well accepted.

A further cause for cautious optimism lies in Australia’s changing demographic. Increasingly our young families have their educational and cultural roots in countries outside of the English-speaking west, where schools are less contaminated by the play-way philosophies of Rousseau and Dewey and where success in demanding examinations is still seen as the eye of the needle through which even the bulkiest camel may one day enter the Kingdom of Heaven. They will surely continue to baulk at conniving with the “dumbing down” schemes of the education class of their adopted country, either by finding the means to school their children outside of the state system or by pressuring those to whom they pay their taxes to ensure that every classroom in the country is a serious place of honest academic endeavour.

Some years ago a very able student at the school where I was principal, was selected to represent Australia in the International Physics Olympiad. A brief mention of this was noted in a column towards the back of Melbourne’s The Age newspaper. The same week a Victorian basketball player won a coveted place in a legendary American team. He was front page news. If Dr Donnelly’s columns are effective in reversing such misplaced priorities, then his continuing contribution to Australia’s education wars will not have been in vain.

Colin Black worked in education in Australia for thirty years, as a lecturer in Education at Curtin University from 1974 – 1980, as a senior staff member at Scotch College, Melbourne from 1980 – 1987, and as Headmaster of Camberwell Grammar School from 1987 until his retirement in 2004. He is a recipient of the Centenary Medal and in 2006 was awarded a Medal in the Order of Australia for his services to education. He is currently living and working in London.

Aside from cold pies, what’s on Shorten’s mind?