It’s a little late, and sad, that the Left, in the guise of a silly review by Hilary McPhee, should be ringing the lepers bell for Ayaan Hirsi Ali’s already sold out talk in Melbourne later this month.

Hilary McPhee is one of our commentariat who blamed John Howard for the brutal killing of innocent Australians in Bali by Islamic terrorists. So it comes as no surprise that, 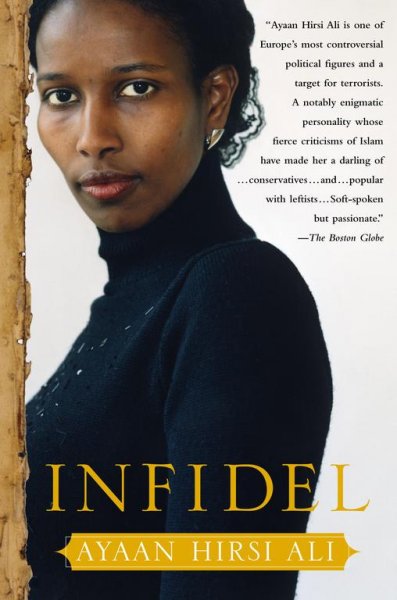 in the guise of a book review of the remarkable autobiography Infidel and the latest reflection, Nomad, to mark Hirsi Ali’s visit to Melbourne, she attacks with barely disguised contempt the brave woman who would know more than Hilary could ever dream of about the vile aspects of Islam that make millions of women’s lives nightmares and turn Islamic extremists into fanatical murderers.

What does Hilary think? Well, she thinks Hirsi Ali’s books “aren’t much good”, that they are “disturbing and delusional”, a “gift to those of us who like our prejudices confirmed” — speaking for yourself Hilary? — and that they fail to give us “a more complex and sympathetic picture of the Muslim world”.

She feels the books fail to remind us “that more than 50 countries from Indonesia to Iran through Africa and the Middle East have Muslim majorities and vastly different cultures and histories”. McPhee is clearly oblivious to the progressive and systematic radicalization and cultural colonization of these “diverse” countries by Middle Eastern fundamentalists in the last few decades.

Of the outstanding book Infidel, she seems to be complaining cynically that it “came at the right time and sold hugely”. Isn’t this the dream of any book publisher? To know exactly what most irks McPhee would be hard to determine. Hirsi Ali criticises multiculturalism, Western feminists, Germaine Greer and Tariz Ramadan. But to top her sins off, Ayaan Hirsi Ali “accepted a job with the ultra-conservative think tank, the American Enterprise Institute, which had provided much of the rationale for military intervention in Iraq and for rebuilding the image of Israel in the world through a conservative alliance with America”. Oh, dear.

But McPhee is generous in her sympathy for Hirsi Ali’s plight. She finishes her irritation in a final sentence: “I can’t help but fear for her.”

A YouTuber for All Seasons