A.C. Clark’s book documents how Chávez trashed a once rich county, Venezuela, and earned the admiration of professional socialists along the way.

“The Internet,” explains Clark “has allowed me to take full advantage of Chávez’s verbal incontinence. Thus, when I report that Chávez described a bout with diarrhea on national television, or asserted that gigantic camels live in the jungle, or when I say that indeed he pays homage to terrorists, I provide Internet links to footage of Chávez saying and doing these things.”

Clark (not his real name for safety reasons) was born and raised in Venezuela, but steadfastly refuses to exalt Chávez. And from carbon-hungry Hollywood to Red Cuba, that’s a treasonous thought crime.

Granted, I’ve never felt that Chávez was level-headed. Ever. He dresses and sounds like a blathering plonker. This leaves one wondering why late night comedians aren’t living off his unintentionally comical speeches. There’s so much brilliant material, as Clark clearly demonstrates. 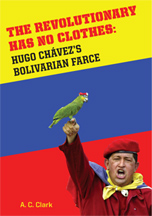 Nepotism is alive in Venezuela too, thanks, in part, to a submissive media. Hugo’s older brother seems to score all these government jobs, like the secretary of education gig. Another position was even created for his brother Argenis, as deputy governor and secretary in the state of Barinas. His brother Adelis is a socialism-first banker, living off government accounts, of course. His brother Ignacio has been a councilman. His youngest brother, Anibal, just happens to be a mayor. And so on.

The serial adulterer (not that’s there’s anything wrong with that in Hollywood) lives like a petulant movie star. And his new wife certainly looks the part, according to critics. Writes Clark: “Now I have nothing against jewelry, luxury cars, or plastic surgery, but it is difficult to ignore the inconsistency between Chávez’s discourse against capitalism and consumerism, on the one hand, and the conspicuous consumption practiced by Chávez and his immediate relatives, on the other.”

It never ends. Chávez misspelled a common verb “adquirir (to acquire), as adquerir” at a pedagogical session, and insists that Venezuela’s literacy rate is high, against all facts. No problem though because Chávez always gives Chávez authority to change words.

And facts. The authoritarian taste tester pontificates about Eurocentric creations like Tarzan, Clark Kent, Mandrake the Magician, and even the Phantom, forgetting that they’re American, and not necessarily white. (Isn’t Superman Jewish?) Real cartoonish dictators are his friends, by the way.

In another case, he asked pupils, “Do you know what a camel is?” after misusing a gospel quote. One child replied, “Yes, it is an animal that lives in the desert,” to which Chávez added, “And, in the jungle, too, kiddo.” The leader explained that camels can be “as big as the [school’s] auditorium too.”

Chávez even banned the Simpsons, because they’re allegedly immoral, as opposed to the cult of Fidel Castro. After ordering the subversive cartoon family off air, Venezuelan television decided to replace them with Baywatch’s cartoonish babes, for some questionable reasons only known to the dictator.

Most outrageously, Chávez attacked Angela Merkel, a European moderate for being a Nazi (National Socialist), although his tax-and-spend policies are closer to Hitler’s. And the former African-American Secretary of State, Republican Condoleezza Rice, whom he labeled “Condolence” and a “Little Girl” must still be feeling dirty.

And Chávez uses international events to distract from local bloodbaths. To the Martini Marxist, Venezuela is his personal ant farm: “During the first seven years that Chávez was in power, 100,000 people were killed in Venezuela, a country with scarcely more than twenty million inhabitants.”

On average, a Chávez year in power equals 15,000 crime-related deaths. And: “As a sobering comparison: by August 21, 2008, over five years after the war in Iraq commenced, the total number of American casualties was 4,148, and in Afghanistan the number was 574.”

Even in Australia (outside the ABC, I mean) the Australia-Venezuelan Solidarity Network is selling beautiful lies about Chávez.

No wonder Arab dictators adore him so. “But Chávez has a particularly strong group of fans in Hollywood. Danny Glover (whose movie projects Chávez now bankrolls), Sean Penn, Harry Belafonte, Naomi Campbell (‘the supermodel turned Latin American specialist,’ as Tony Allen-Mills wittily put it), Peter Coyote, and Kevin Spacey, among others, all fawn over the Great Leader.”

Like Gore, Chávez is above debate because “eagles do not hunt flies.” People with opposing views are “dwarfs.” Or “fags.” Or “limp-dicks.” Or “squealing pigs.”

The cult of personality is a force to be reckoned with, to be sure. Unlike Bolivar, Venezuela’s founding father, however, Chávez is completely non compos mentis.

Hypocrisy, thy name is feminism