Can you even imagine it! A  journalism lecturer  shows students how to fact-check the climate alarmists’ wild claims and doom-laden forecasts. And he publishes a peer-reviewed commentary, Environmental  Reporting in a Post Truth World, analysing how the media ignores research that runs contrary to the alarmist narrative.

Lordy! How can this fellow get away with it in our all-pervading Left-alarmist academic establishment?

Meet Dr David Blackall (above), senior lecturer in journalism at Wollongong University. His paper is in the journal Asia Pacific  Media Educator. But since he’s in the process of retiring after 25 years with the university, he can rock the boat without fearing for his career prospects.[1]

“I’m packing up my office right now,” he tells Quadrant Online. “I haven’t had any backlash, even though the climate debate seems to be getting increasingly toxic and nasty. Younger academics can’t call out the fake news on climate like I can, because they’d risk their jobs and mortgages.”

The Wollongong Bachelor of Journalism course takes in about 80 entrants a year, plus others from an allied course, Bachelor of Communication and Media Studies. Blackall’s first degree is a Bachelor of Science (Agriculture), and he taught senior HSC agriculture, biology, physics and chemistry for ten years into the 1980s. This broad science background advantages him over non-science journalism academics, and over scientists so over-specialised that they miss the big picture.

Blackall is an ardent conservationist of biodiversity. He has his own 16ha wildlife  refuge reserve ‘Nadjunuga’ at Cambewarra  Mountain, previously a university field station, which he has managed for nearly 40 years. He has also taught and practiced investigative journalism, and last year co-authored an FOI-based study in the Lawyers Alliance journal Precedent on the Ponzi-style fraud and collapse of the Trio Capital Group during 2003-10.

The Blackall Post Truth paper has been re-blogged by leading European sceptic Pierre Gosselin, who asks, “Would it be so difficult for journalists to actually seek scientific verification of their claims before publishing? Or is the pursuit of real-world scientific confirmation too much to expect from journalists and media sources bent on advancing an agenda in this ‘Post Truth World’?”

Blackall writes that journalism students can be defensive about climate because they want careers in corporate media where the “greenhouse warming” narrative holds sway. “Contrary but accurate science journalism  must be generated for balancing societal discourse and demonstrating the Earth’s natural variability,” he writes. Journalists fail to verify facts, including that polar bear populations are increasing, contrary to what he calls the ‘emotional propaganda’ and ‘fake news’ of alarmists.

To deflect being labelled a ‘climate denier’, he gives students assignments on hypotheticals such as the impact of deforestation on clouds and climate. “In previous epochs, CO2 levels were around 400ppm, as they are now, but never in human history has the Earth’s surface been as denuded,” he writes. He cites a study this year that CO2 emissions from land-use changes –  such as tree harvesting and clearing for shifting  agriculture – have been substantially under-estimated.

“However, as a journalism educator, I also recognise that my view, along with others, must be open to challenge both within the scientific community and in the court of public opinion,” he continues.

“It is my responsibility to provide my students with the research skills they need to question – and test – the arguments put forward by key players in any debate.  Given the complexity of the climate warming debate, and the contested nature of the science that underpins both sides, this will provide challenges well into the future.  It is a challenge our students should relish, particularly in an era when they are constantly being bombarded with ‘fake news’ and so-called ‘alternative facts’.

He alerts his students to fake climate pictures, such as the use by Reuters of a 2010 photo-shopped image of two Adelie penguins on a block of melting Antarctic ice. The same faked picture (below) had also been used in 2013 to illustrate arctic warming (notwithstanding that penguins aren’t found in the Arctic). He also directs students to look into the  dubious ‘pause-busting” paper by Tom Karl of NOAA, timed to influence the 2015 Paris climate summit. “There are many agendas at play, with careers at stake,” he says. 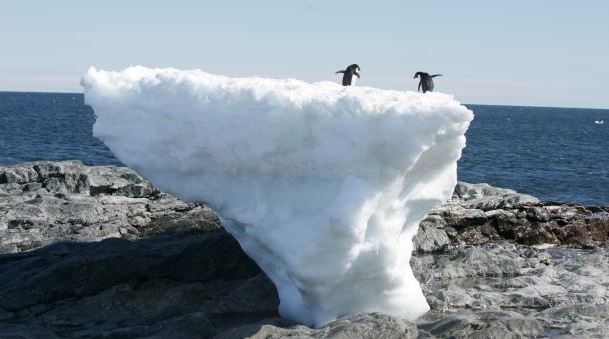 Blackall’s paper queries why journalists fail to report the widening gap between climate models’ temperature forecasts and actual temperatures. Similarly, they don’t report the non-acceleration of sea-level rise, a big problem for the alarmist narrative.

His main argument is that human-caused greenhouse gases are not the main source of climate change, as claimed by the climate establishment.  The flat-lining of global temperatures in the past two decades despite massive CO2 increases is an obvious problem for the orthodox narrative, he says. There are multiple interacting and little-understood natural causes, but computer modelling is privileged over other relevant disciplines, such as geology. Alarmists play down the major uncertainties and use ‘consensus’ as a culture of gatekeeping  against contrary views. “Then, and dangerously, dissenters are silenced so that chosen and ‘necessary’ discourses arrive in journals, conferences and boardrooms,” he writes.

Blackall outed himself as a climate sceptic nearly a decade ago. In a 2010 paper also published in Asia Pacific Media Educator   (“Anti-terrorism, climate change and ‘dog whistle’ journalism”) he wrote of the compliant mainstream news media fanning fears on behalf of governments about imaginary climate catastrophes.[2]

Educators of journalists need to give students double skills – of integrity and fearlessness, plus the ability to maintain employability in the mainstream media, he wrote. The students need to become ‘highly adept chameleons’ to further their careers. They are given ‘hypotheticals’ requiring checking narratives against science literature. But the drafts must also be written conservatively. “No newspaper would run anything too removed from the dominant view on climate variability,” Blackall continued.

The media seemed unable to do routine internet searching to act as a ‘watchdog’ on government. This was reflected in its ‘advocacy journalism’ about the 2009 Copenhagen summit and downplaying of the Climategate email leaks, he wrote. [3]

In this paper he was prescient in highlighting the corrupted temperature  data relied on for the alarmist narrative and modelling —  including data from non-existent weather stations and stations affected by the non-CO2 urban heat island effects. In contrast, rural stations typically showed decades of consistent temperatures, he said. “News media have failed to explain or examine  these simple anomalies,” he complained. He also instanced floods being blamed by media on climate change when  the immediate cause was irresponsible local activities upstream, including tree-felling and mismanagement of dams.

He argued that without acutely educated scepticism, journalism graduates fall prey to the seductive and political tune of the dog whistle, such as believing the myth of a ‘climate consensus’.

Blackall’s arguments can be verified by  journalists’ climate ignorance in their use of the nonsense propaganda phrase “carbon pollution” when they actually mean “CO2 emissions”. Not one in a hundred journalists who quote the so-called “97% consensus” on climate alarm would be aware that the John Cook (UQ) study actually found that only 0.3% of 12,000 studies supported the IPCC line that more than half the past 60 years’ warming is human-caused.

Blackall’s critique of journalists can be tested against The Age (Garry Maddox) and The Australian (Rosemary Neill) stories last weekend about Al Gore marketing his climate-alarm film An Inconvenient Sequel in Melbourne.  Neither thought it worth mentioning that anti-emissions campaigner Gore inhabits a 20-room house (one of his three homes) whose pool heating alone uses as much electricity as six average US homes, and whose total electricity consumption is that of 21 normal residences.[4] The Age’s Maddox did not mention that Gore and his business partner from Goldman Sachs, according to Forbes, made nearly $US220m in carbon trading profits from 2008-2011.

The Australian’s Neill commendably reported the accusations of Gore’s enrichment via green schemes, and unlike Maddox, she drew attention to the UK High Court’s 2007 finding of nine scientific and other errors in Gore’s first film. The court also ruled that the film’s partisan stance made it inappropriate for UK school children unless accompanied by balancing  material. Neill should have queried why Gore had not corrected the nine errors or issued an errata, instead permitting the flawed film to mislead further millions of students. The film even asserts in its ignorance that some Pacific nations “have all had to evacuate to New Zealand.”

The Australian, via ex-ABC chair Maurice Newman, reported that Gore’s opposite number, top US sceptic blogger Marc Morano, was in Melbourne concurrently with Gore and promoting his own film Climate Hustle. The Age and the ABC ignored Morano (while the ABC gave Gore blanket coverage) but Andrew Bolt (Herald Sun) gave Morano a prominent interview.

Dr Blackall’s retirement is a loss to journalist education. Let’s hope there are others like him out there, with the guts, smarts and integrity to take on the “kindergarten science” of climate alarm.

[1] He was previously an investigative documentary filmmaker with SBS, and an independent filmmaker, to which he is returning in retirement.

“Climate science we are endless told is ‘settled’ … but to make the perfectly reasonable  point that science is never settled risks being branded a ‘sceptic’ or worse a ‘denier’…one of those words like ‘racist’ which is deliberately designed to gag debate…You can be branded a denier if you accept the problem and question the solutions.”

[4] Only 6% of Gore’s home’s electricity is from solar power.