Public Enemies is purportedly the story of the last days of John Dillinger, bank- robbing gangster and popular anti-hero. Johnny Depp, in the title role, is far better looking than John Dillinger, and he gets to wear 30s-style clothing and unusual sunglasses and look like Howard Hughes, which he clearly enjoys.

It’s a movie which presupposes a great deal of pre-existing knowledge on the part of its audience. A person who didn’t know anything about 1930s gangsterism and organised crime in Chicago, about Dillinger’s career and eventual end, and about the FBI’s history, would come out of the cinema very little the wiser.

And as a movie pitched deliberately at a slightly more intelligent audience, it is disappointingly unimaginative in places. J Edgar Hoover is once again portrayed as an ever-so-slightly effeminate bureaucrat, whose nonsensical ideas about improving the quality of the FBI’s membership are clearly the product of his small-minded snobbery and closet homosexuality. It’s intriguing that the movie industry can portray even closeted gays in the military as just as tough as, if not tougher and even more meritorious than, everyone else, but when it comes to Hoover, gays in the FBI are effeminate and rather cowardly snobs. 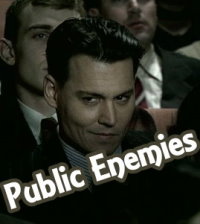 And Dillinger is, naturally, the Robin Hood of the piece. A quasi-Clark Gable, he robs from the rich but allows the poor to keep their measly deposits, he helps ladies on with their coats, and behaves like a gentleman to his female hostages. You know, in the same vein as Hitler really liking dogs, and Mussolini being a family man, and Osama Bin Laden giving generously to many Islamic charities.

Because, you see, Dillinger only kills policemen, and FBI agents, and other gangsters. So that’s all right. After all – and here comes the heavy-handed message – who are the real public enemies? Are they Dillinger, Baby Face Nelson, Pretty Boy Floyd and their organised crime links and reign of terror, or J Edgar Hoover and his phone-tapping, ham-fisted thug interrogators, and media manipulation? Ho hum. It makes one long for the days of The Untouchables.

Still, there’s plenty of G-men, car chases, men firing Gatling guns from running boards of antique automobiles, women in satin evening dresses, and period detail just oozing out of every corner. There are some fine moments, especially towards the end when Dillinger is watching his final movie Manhattan Melodrama, before leaving the cinema to be gunned down. The prison breakouts and escapes are well handled; they are hugely exciting and almost unbelievable.

In between, however, it’s hard to stay interested in the characters, especially when everyone mumbles and is practically incomprehensible. I know it’s a sign of impending dotage to make a remark like this, but in this movie they genuinely do all mumble, and it’s impossible to engage with the characters when it takes you half the movie to work out that the attractive Irishman who appears to be Dillinger’s best friend is actually Baby Face Nelson.

Meanwhile, I am waiting for the definitive J Edgar Hoover biopic, but not with my breath held.

Commentary on NCCET statement on ivermectin