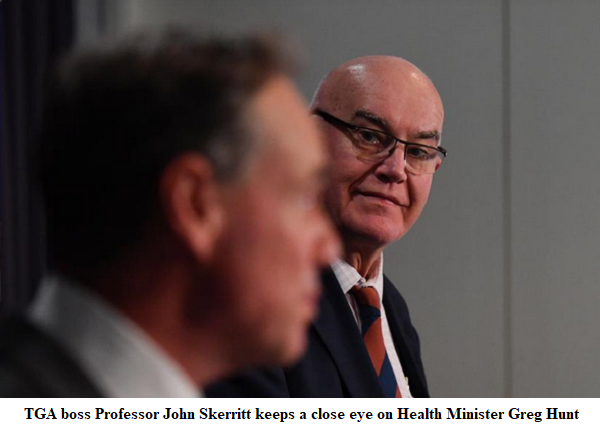 You have to wonder what is going on at the Therapeutic Goods Administration, whence bizarre edicts are emerging in recent profusion. Take ivermectin, for instance, which a goodly body of evidence and opinion asserts is useful in preventing and treating COVID-19 infections. Last month, Health Minister Greg Hunt went on the record as saying doctors were free to prescribe the cheap, off-patent medication. Here is what he wrote:

“I acknowledge some physicians are prescribing ivermectin off-label. As you would know, the practice of prescribing medications outside of their approved indications is not regulated nor controlled by the Therapeutic Goods Administration, as it is at the discretion of the prescribing official.”

On Friday, directly countermanding the minister, the TGA’s bureaucrats banned ivermectin for anything other than standard uses, chiefly the the treatment of roundworm infestations. This followed the Pharmaceutical Society of Australia telling High Street chemists not to fill lawfully written prescriptions.

Does Minister Hunt oversee policy or do bureaucrats oversee the minister?

Then there is the looming ban on vaping other than when nicotine-infused “juice” is prescribed by a doctor and obtained from a chemist.

That vaping ban prompted Dr Gilbert Berdine to wonder what sort of minds and agendas are shaping TGA policy. — rf

THERE is very little doubt that vaping – the use of electronic cigarettes or e-cigarettes – poses fewer health risks than cigarette smoking. Public perception, however, is that e-cigarettes are at least as harmful as smoking. This error of public perception is likely due to the following combination of errors:

♦ association of risk of smoking with nicotine rather than combustion products;

♦ conflation of nicotine addiction with the harmful effects of smoking; and

♦ misunderstanding of the importance of nicotine addiction to failure of smoking cessation efforts.

The discussion below will try to correct the above errors of perception. This discussion is based on my own professional experience as a medical doctor (MD) in treating smokers for over 40 years as well as two United Kingdom (UK) reports claiming that vaping e-cigarettes is “less harmful” than smoking cigarettes:

♦  E-cigarettes and heated tobacco products: evidence review by Public Health England (6 February 2018) which states “vaping is at least 95 per cent less harmful than smoking”; and

♦  Nicotine without smoke: Tobacco harm reduction by the Royal College of Physicians (28 April 2016) which states “e-cigarettes [are] unlikely to exceed 5 per cent of the harm from smoking tobacco”.

There is unanimity of opinion in the medical community that cigarette smoking is an important risk factor for chronic cardiovascular and lung disease including stroke, myocardial infarction (or heart attack), and chronic obstructive pulmonary disease (COPD). For COPD, smoking dwarfs all other risk factors combined. Death is more likely caused by these chronic diseases than by cancer, yet the public associates smoking with cancer rather than chronic disease. Unlike hypertension, which is generally not a choice, smoking is a behavior that can be eliminated. Smoking causes these chronic diseases (and cancer) by exposure to toxic substances in the cigarette smoke.

Prior to COVID-19 dominating the health care news, there was a great deal of concern about e-cigarette or vaping associated lung injury (EVALI). There were calls for more regulation, and some jurisdictions proposed bans on vaping. It turns out, however, that the regulation of vaping was responsible for EVALI. It should have been curious that vaping existed as a growing industry for over ten years without any cases of EVALI. As if by magic, there was a new illness associated with vaping that suddenly appeared in 2018-19. We now know that EVALI is mostly caused by the use of vitamin E acetate as a thickening agent. The use of vitamin E acetate appeared because regulation led to black markets supplied by illicit operators who used it as a cheap way to cut the product much like illicit heroin suppliers use talc. In the absence of government interference, there would have been no EVALI.

In 1914, deaths from motor vehicle accidents were over 33 deaths per 10,000 vehicles in use. That number is now less than 2. The market leads to improved quality of product over time. We might have banned cars in 1914 to deal with the tragedy of deaths by motor vehicle accident. Had we done so our lives would be worse today with shorter life expectancy. The market mechanism creates incentives for manufacturers of e-cigarettes to improve their product over time. These improvements include learning what impurities are causing adverse side effects and eliminating them. The suppliers also have incentives to provide the delivery of nicotine in a manner that users of e-cigarettes demand.

Government and the medical profession have recently demonized nicotine. There is considerable irony here given the past histories of government and the medical profession. The US military provided free or low-cost cigarettes as a recruiting tool. There was a time during the 1930’s when physicians were used in advertisements for cigarette smoking. Smoking cessation is very difficult for most people. Both government and the medical profession have oversimplified the problem by creating an image that the difficulties of smoking cessation are entirely due to nicotine addiction. This is clearly not true. If smoking cessation were merely a matter of dealing with nicotine addiction, then previous systems of nicotine replacement therapies would have worked so well that there would be no market for e-cigarettes. Despite approval of nicotine replacement therapy by the American medical establishment, nicotine gum and nicotine patches fail by 80 per cent or more.

There is more to smoking cessation than nicotine. Smokers who are hospitalized are not permitted to smoke. In my experience, there is rarely a problem keeping patients smoke-free in the hospital. After two weeks, any physical addiction is no longer an issue. Yet, the first thing these patients do when they return home is smoke a cigarette. There are reasons why people smoke. Smoking fulfills some need. Contrary to what the government may claim, the problem is more than patients not understanding the risks of smoking. As a medical student at Harvard University School of Medicine in 1974, the professor who taught first year pathology had a ritual of pointing to a slide of lung cancer using a lit cigarette as a pointer. The professor was making an exclamation point with this gesture: I know all about the hazards of smoking, but I am going to smoke anyway.

Nicotine binds to receptors that exist in everyone. The same is true for opioids. Prior to the discovery of endorphins, it was a mystery why we had receptors for addictive opioids that seemed to have no functional purpose. Now we at least partially understand the importance of opioid receptors. Nicotine serves a purpose. Otherwise, the receptors would not exist. Unfortunately, the current paradigm of solving medical problems by breaking biochemical pathways is so dominant, that we do not even seem interested in understanding why things are the way they are. E-cigarettes have the potential to serve as a platform for carefully controlled delivery of nicotine to those who want it. We already recognize that different groups of nicotine consumers exist: some want a rapid onset to a high peak level; some want to maintain a minimum trough level; and some want steady delivery. Government generally creates a one-size fits all standard based on an average for the entire population that does not serve any individual well.

There are likely to be adverse effects of vaping. We should not encourage people to take up vaping as a habit.

However, we should recognise that vaping does help some people quit smoking. Given that the hazards of smoking are much greater than the hazards of vaping, if even a small number of smokers successfully quit smoking using e-cigarettes as a bridge therapy, then it is a victory. The market will allow manufacturers to discover any harmful effects and eliminate them over time. Demonizing vaping will only lead to black markets with more dangerous products available and no means to legally correct the problems. This has already occurred with EVALI. We need to stop repeating the same mistakes.

Dr Gilbert Berdine MD is an associate professor of internal medicine at the Texas Tech University Health Sciences Center (TTUHSC) and a faculty affiliate with the Free Market Institute. Dr Berdine earned his undergraduate science degree in chemistry and life sciences from the Massachusetts Institute of Technology in Boston and his graduate medical degree from Harvard University School of Medicine in Boston. He completed both his residency in internal medicine and fellowship in pulmonary diseases at the Peter Bent Brigham Hospital (now called Brigham and Women’s Hospital) in Boston. He regularly writes for both the American Institute for Economic Research and Mises Institute.

The Right to Hold a Job Becomes a ‘Benefit’