No cold comfort in this chilled economy

Partly I am onside with Penny Wong. I wouldn’t go so far as to say that it is all Premier Campbell Newman’s fault, but he must bear some blame for driving me out of the latest film version of Les Mis two-thirds way through.

I don’t hold the Premier to blame for the abysmally tedious, stretched-out movie and the woeful singing and dreadful acting on the part of Russell Crowe. Now I like Crowe. He was great in L.A. Confidential and in Gladiator, but this movie was simply not for him. I began to get irritated after the first half hour. Even the rollicking singing scene in the inn compared poorly with a similar scene so many years ago in Oliver!. This, of course, is just my opinion.

To some extent I hold Steven Kates and Peter Wales (in QOL) responsible for my misstep of seeing the movie, or part of it. By putting emphasis on the politics of it they both rather missed telling me how awful it is as a movie. Mind you, there is no accounting for taste. Kates urges his readers to see it because it is bound to win plaudits and, even though pointing to some artistic shortfalls, Wales doesn’t say anything smacking of a warning to keep away.

What I partly blame Newman for is the icy coldness of the movie theatre. I am used to having to take a sweater to the movies even on the hottest of days, but this was anorak territory. Why, I thought? Then it hit me. They need to keep the indigent out! A cosy cinema seat for the day with continuous entertainment might be too tempting for the dispossessed. Answer: keep it too cold for comfort.

I can only imagine that the latest headline increase in unemployment (from a seasonally adjusted 5.3 to 5.4 per cent) caused cinema management at the Orpheum to turn the air-conditioner up a large notch as a precautionary measure. Potential hyperthermia combined with ennui had me walking out. I met two ladies on the way out, mother and daughter of some maturity, who were also leaving early. They too mentioned the cold and the dreadful movie. This validation absolutely convinced me I was right.

Since Newman was elected in March this year, the Queensland labour market has underperformed the national market and therefore has had some, albeit minor, influence in dragging it down. As Ms Wong correctly attests, sacking public servants undoubtedly has something to do with that. Of course, if all governments took the same course of reducing their bloated public sectors national unemployment would initially rise still further; and cinemas would get colder I imagine. What to do?

Wong’s answer to avoiding the short-term pain is seemingly simple: keep on employing redundant public servants at the private sector’s expense. If you think that is plain silly you obviously don’t vote for the Labor Party or the Greens and have not been inducted into their world, where the government is the answer to all of the economy’s and life’s problems.

Quite apart from anything happening in Queensland, the national labour market has been weakening, without tanking, for some time. I tend to look at trend figures on hours worked to get a reliable guide. Trend figures even out ups and downs and sampling errors; and hours worked provide a universal measure across part-time and full-time employment and overtime.

You find that the annual growth in hours worked is around 3% or above when the economy is buoyant, as it was immediately before the GFC, or is recovering, as it was in the second half of 2010. If recovery had led to buoyancy, the growth in hours worked would have remained at around the 3 per cent level. In fact, this growth progressively declined throughout all of 2011 and most of 2012 until it hit slightly negative territory in August. It has since crept back, to just 0.3% in December. At the point of the biggest impact of the GFC it fell to minus 2%. 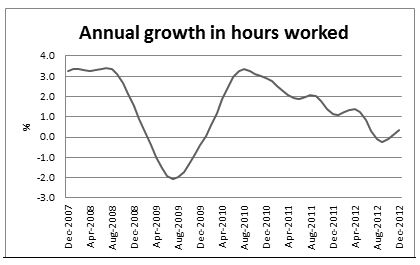 What this means is that the economy is suffering a malaise. It might struggle on like this for some time. This seems the most likely outcome over the next six months or so. Or, it could fall into recession or recover, depending in part on what happens in the US and Europe. I think I have now removed all possibility of being wrong by covering all possible outcomes.

Overseas events can’t be controlled. Domestically, the election of a Coalition government later this year (presumably that is still almost certain) and the subsequent removal of the carbon and discriminatory mining taxes, and the improved likelihood of balancing the budget, would undoubtedly shift the balance somewhat towards the economy recovering.

Peter Smith, a frequent Quadrant Online contributor, is the author of Bad Economics.

Fevered Thoughts of a Woke Banker

Can Gina do it?