It is difficult to get rid of the noise and concentrate on the facts on global warming. And the central fact is not to do with whether the Barrier Reef is as healthy as it should be, or whether sea levels are rising at a threatening rate, or whether storms, heatwaves and droughts are becoming more frequent or intense. The central fact is to do with whether the atmosphere is warming, by how much and through what cause. The rest is simply derivative.

The HadCRUT global land and sea series going back to 1850 shows a trend rise of 0.8 degrees Celsius from then until now. How reliable is this? I don’t think anyone knows. But it is the data we have. The two main satellite data series RSS and UAH which began in 1979 are presumably reliable and these show a trend rise in the temperature of 0.44 and 0.48 degrees respectively in the 35 years between 1979 and 2014.

Clearly if you believe in both the long-dated and more recent satellite series there has been a distinct rise in the rate of warming; comparing the 129 years from 1850 to 1979 with the subsequent 35 years. I will come back to what’s been happening within these 35 years.

I have an open mind (or so I claim at any rate) and so I’ve been willing to listen to scientists who say that the rise in the rate of warming is untoward and primarily attributable to man-made CO2 emissions. At the same time, I have taken note of scientists like Bob Carter and Richard Lindzen who have sceptical views. I still don’t know who is right. No idea at all. Why should I? Why should any non-scientist?

My strong condemnatory views are reserved for forlorn and wealth-destroying counter-measures to warming, like subsidised wind turbines or emission-trading rackets. A rational world that was serious about man-made global warming would invest in R&D to improve across-the-board fuel efficiency, would minimise obstacles to the development and use of cleaner fuels like shale- and coal-seam gas and nuclear energy, and it would invest in adaptation to extreme weather events. All of this would provide a bountiful legacy whether global warming turns out to be ‘real’ or not.

Now back to temperature trends over recent years. Some sceptics have noted that global temperatures have not risen for 17 years. The way temperatures bounce up and down and the aberrantly high temperatures recorded in 1998 under an El Nino influence complicate going back that far. The outcome is too sensitive to the start point.

As starting points matter, why not choose a start with the natural and objective feel to it of January, 2000? And, as the beginning of 2000 was a fluctuating low point for temperatures, it has the advantage, in the circumstances, of imparting a bias going forward towards the warmists’ rather than sceptics’ position.

The four most-relied upon global temperature series are three already mentioned (HadCRUT, RSS, UAH) and the GISS global land and sea series. According to the excellent woodfortrees.org, the latest HadCRUT, GISS and UAH series show linear-trend  temperature rises from the beginning of 2000 until the second quarter of 2014 of .004, .006 and .009 degrees per year. And if you add a year and start from January 2001 these extremely slight trend rises are either wholly or largely wiped out. The RSS series in fact shows temperatures falling from 2000 but by less per year than an amount measurable to minus three decimal points. 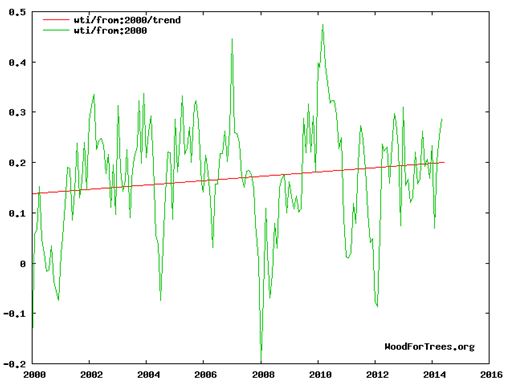 It is clear from observing the pronounced fluctuations around the linear trends (the graph shows a Wood for Trees’ consolidation of the four temperature series) that the null hypothesis of temperatures having exhibited no upward or downward trend over the period is compelling. It must be understood that this is not simply saying that there has been no statistically significant rise, though that is true. A statistically significant rise from a scientific point of view is a necessarily high barrier. In this case, there is no scientific basis at all to conclude other than that temperatures have plateaued. Where they will go from here, I suspect, is anyone’s guess.

On a climate scale it is clear that ‘untoward’ warming has been contained within a relatively short number of years dating from around 1975 until around 2000. However, this rise was sharp enough to justify speculation and investigation as to its cause; there should be no doubt of that. The problem has been the haste in establishing CO2 as the primary cause and the response to those with genuine doubts. No doubts have been entertained. Doubters have been shunned.

It has been beyond extraordinary. And it is this essentially unscientific paradigm around global warming that has made me sympathetic at times with those who regard the whole thing as a scam or hoax pedalled by loony-tune environmentalists, those seduced by research grants and academic group-think, and increasingly by main-chancers who see a buck in it.

You can’t hide the recent plateau of temperatures by moving to a comparison of decade upon decade without looking shifty. And you can’t tell people that temperatures have in fact continued to rise but that the sea must have suddenly taken to swallowing them without looking like a snake oil salesman.

If scientists could only get back to being scientific and out to disprove rather than confirm their theories, the sooner we might all get our confidence back in climate science. But along the way we have to lose the know-nothing parasitical activists. We don’t need activists on either side of the question. We need objective science with all of its uncertainties and disputations exposed, and economically sensible solutions to deal with risks identified.

Clarity on the Murray