The Very Model of a Global Green Rorter

From top to bottom, things don’t get more disgusting than at the UN Environment Program, which runs the UN’s anti-emissions campaign. Indeed, UNEP under its director Maurice Strong in 1988 co-founded the Intergovernmental Panel on Climate Change. In 2005 Strong was caught red-handed at the UN with a $US988,000 cheque from a South Korean business man. Strong fled to the safety of Beijing — China has no extradition treaty with the US — and he lived there, honoured and unprosecuted, until his death in 2015.

Life at the top of UNEP is no longer so spectacular, but its latest director-general, Erik Solheim (above), had to resign last month when an internal audit exposed his rorting of travel and lifestyle costs. While preaching against CO2 emissions, he enjoyed aerial globetrotting for 529 days of 668 days (audited) since getting the job in 2016.

More of Solheim later, but let’s take a look now at the underbelly of UNEP’s COP24 at Katowice, a talkfest for 23,000 designed to save the planet and transfer at least  $US100 billion a year, as of 2020, from the West to African and other Third World basket-cases. Numbers of these countries displayed their integrity by each flying literally hundreds of freeloaders to Poland, their travel and living costs disbursed from UN funds courtesy of UN donors, including Australia.

Resoures-rich Republic of Guinea in general fits the Trump definition of “a shithole country”. It’s 85% Muslim, 96-98% of women suffer genital mutilation, child marriage and illiteracy rates are among the world’s highest, 5% of women can expect death in childbirth, close to 40% of the population suffers malnutrition, and health threats range from HIV/AIDS to malaria and ebola. Only a quarter of the population has electricity, children are trafficked with impunity for sex and slavery, and after nine years, no security forces have been tried for a 2009 pre-election massacre of 156 people and rape of more than 100 women. Need it be said that the government is monstrously corrupt?

But in one respect Guinea is a world champion – the size of its delegations to UN climate change confabs. At COP24 in Katowice this month, freeloaders from Guinea comprised 406 of the 14,000 official delegates, easily outclassing Congo with only 237 and Ivory Coast with 208. Last year at COP23 in Bonn, Guinea sent 355, beaten by Ivory Coast with a stunning 492. At the Paris COP21, Guinea sent 398.

The Guinea total includes politicians, officials, and NGO people. They trooped to a special UN office at Katowice, presented passport and plane tickets, and collected their cash from a nearby bank window. How much allowed? For the minimum stay of 12 days, US2328 or $A3235. Last year in Germany, $A4914.

Nature guru David Attenborough saw no irony in warning at the opening about “the collapse of civilisations” from too much CO2. Oh, the irony! The Katowice summit was itself estimated to emit an extra 55,000 tonnes of CO2, excluding the formidable emissions from delegates’ junketeering via scheduled flights or celebrity private jet. There was also the cost to Poland  and the atmosphere of building virtually an entire new town for the 30,000 visitors. Those 55,000 tonnes emissions, by the way, equate with the annual emissions of about 8500 homes, 12,000 cars or 728 tanker-truck loads of petrol.

The UN’s face-saver is that it pays for CO2 offsets, in this case for planting 7 million trees in Poland. It also offers free lanyards to visitors who buy CO2 offsets. Good work, UN. 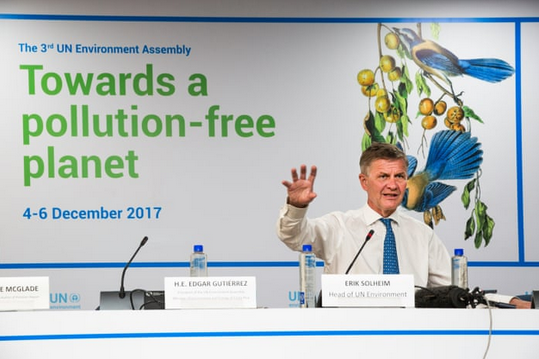 Erik the Rorter pauses between flights to urge reductions in global emissions.

A person might say of Guinea and Benin, “Well, that’s Africa for you.” But the worst cesspit of nation (to use a more genteel turn of phrase than that favoured by Trump) must be Norway, for hypocrisy. Its one-time  (2007-12) environment minister  and Socialist Left/Greens politician Erik Solheim moved in 2016 to run the UN Environment Program (UNEP) with its budget of $US780 million. UNEP operates as the “global environmental authority that sets the global environmental agenda.”

Solheim quit as executive director last month after being sprung by auditors for massive luxury travel and expense rorting. He totted up $US488,000 ($A 678,000) for 22 months travel, involving 80% of his workdays. There were also 76 days’ worth of unexplained sojourns in Oslo and Paris. On one weekend he flew Washington DC to Paris for a weekend’s relaxation, returning Paris-New York. Who was authorising such trips? One of Solheim’s subordinates – unusual, that.

UNEP headquarters are in Nairobi, but who would want to work there? So Solheim allowed two pet staff unofficial licence to work out of Paris instead, at a cost of $US23,000-plus in extra travel. Other managers told the press that Solheim had been “getting away with murder” with his “haphazard and dictatorial management style”.

A Norwegian company won business from UNEP last April and, shortly after, decided to hire his spouse, Gry Ulverud Solheim. Mr Solheim had to recuse himself from further dealings with the company and, in his official capacity, his missus.

Some US staff considered Solheim had grown far too chummy with China, and they were suspicious of Solheim’s environmental examinations of the Middle Kingdom’s vast Belt and Road project. He also made an unpublicised UNEP $US500,000 donation to the Volvo Ocean Race. At least the public knew where those yachts were going. UN Environment people in general were gadding about a lot, and their destinations and reasons remain something of a mystery. The auditors sought data on 596 staff trips, but 210 trips couldn’t be documented and another 200 had to be hastily documented post-audit. The UN internal preliminary audit was leaked to The Guardian UK. The full report is still not public.

Denmark, Sweden, Japan, Belgium and the Netherlands withheld some $US50 million in UNEP funding when they learnt of Solheim’s habits, threatening UNEP with a financial crisis. One wonders why Australia’s UNEP rep made no  overt contribution to the fightback against top-level rorting.

Solheim initially maintained that he couldn’t be treated like at 7am-4pm factory worker and shouldn’t be asked “stupid questions”  about his work arrangements. When the audit came out, Solheim led his top troops on a three-day soul-searching retreat. They just had time to agree on a “commitment to a set of principles to guide the way we work and interact”, before he bugged out of UNEP the next day.

The auditors said Solheim had “no regard for abiding by the set regulations and rules,” noting this was a “reputation risk” for an organisation dedicated to fighting climate change. Solheim’s behavior, they said, was “contrary to the ethos of carbon emission reduction.”  The auditors drew attention to a 2011 policy UN statement that it would set an example of probity, including on environmental sustainability. These UN statements of good intent are a regular affair, just as are the exposures of UN corruption.

Solheim’s farewell:  “As I have maintained throughout this process, I have been and remain committed to doing what I believe to be in the best interest of UN Environment and the mission we are here to achieve.

“For this reason, after deep reflection and in close consultation with the Secretary-General, I am stepping down.”

One would also think the UN Secretary-General António Guterres would be outraged by Solheim’s jet-about rorting. No, no, no. He waved him on his way with praise for the “transformational change needed to make a real difference in the lives of people and promote the cause of the environment.”

“The secretary general is grateful for Mr. Solheim’s service and recognises that he has been a leading voice in drawing the world’s attention to critical environmental challenges, including plastics pollution and circularity; climate action; the rights of environmental defenders; biodiversity; and environmental security,” the Secretary-General said.

Whether it’s African parasites piling onto the annual climate junk-fests or the top UN climate man rorting the system silly, even the most fervent catastrophists must sometimes wonder at the company they keep.

The ABC: You Pay, They Twist