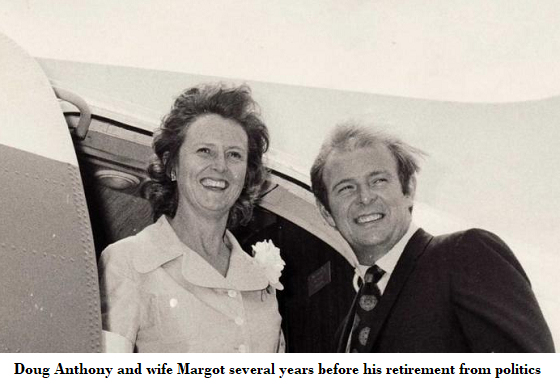 For a period of nearly six months in 1979, as the Trade Department’s chief economist, I was seconded to become Deputy PM Doug Anthony’s Acting Principal Private Secretary. Nowadays the position is called Chief of Staff but in those far-off times ministerial staff were only one quarter as numerous as today.  The job meant speech writing and providing briefings on other departments’ Cabinet submissions.

Anthony himself, though affecting the air of a hayseed, was well read and open to different ideas.  He was appalled at the Whitlam Government’s policy excesses — though the extremism of some of those have been since surpassed by Coalition governments!  Naturally, he shared none of the Whitlam government’s hostility to the mining industry which led it to micro-managing price negotiations, but it was not until the Hawke Government in 1983 that the bureaucratic machinery for this was fully dismantled.

I joined him after a period when he had been effectively sidelined with a severe bout hepatitis and was determined to restore a role in the limelight by distancing himself from Malcolm Fraser in ways that did not undermine him. To do so he took some political risks.  One involved taxation policy – he asked me what I thought of the notion of a flat rate of tax, then something discussed only is esoteric economists’ circles. When I told him it was the best policy approach but probably politically impossible he asked me to make it prominent in an up-coming speech.  The outcome was enormous publicity and considerable opposition, but it paved the way for a more modern consensus in favour of flattening of tax rates when, prior to that, increasingly progressive rates were the model.

Though he played a critical role in supporting free trade with New Zealand — astonishingly, then a contentious policy — Anthony was hardly a political liberal.  He usually sought favourable deals for primary industry even when these were unwise; he therefore opposed the dollar revaluations that a resource boom in the late 1960s required (the Whitlam government opposed devaluations in the mid 1970s necessitated by commodity-price collapses).  He also championed commodity schemes, including the wool industry reserve price scheme. Inevitably (under Hawke) this led to a price far in excess of the market and a stock overhang, the unwinding of which was very painful for the wool industry.

But he did recognise the protectionism that his predecessor, Jack McEwan, had championed was out of hand.  It took little prodding from me for him to question whether tariffs, like those on cars in the late 1970s (effectively de facto 80-plus per cent) were excessive.  Featuring such views in public addresses led to the Industry Department belligerently demanding that I inform the Deputy Prime Minister that he was part of the Cabinet!

Anthony also opposed Malcolm Fraser’s foray into environmentalism, the test case being extracting zircon from sand on Queensland’s Fraser Island.  In supporting the activity, Anthony knew that it would leave no visible effect but Malcolm Fraser was intent on establishing credibility with the nascent green forces. Anthony had to back down.

Some have argued that Anthony was a major force in rebranding the Country Party as the National Party.  That was not my understanding.  While Anthony led the Party’s shift beyond representing farmers and their rural associates, he saw the future as winning those outside of major cities in the growing mining sector. Though happy to see his party becoming the National Country Party, he resisted changing the name to National Party, with all that implied about diverting political effort to challenging the Liberal vote in cities and suburbia. Joh Bjelke Petersen in Queensland had a different agenda and Doug Anthony’s own position on this may have been influenced by his viewing Joh as a rival for the Party’s leadership.

Doug was very likeable, down-to-earth and considerate with a genuine interest in the well-being of those around him.  On one occasion (when he was actually Acting PM) his driver was slightly incapacitated and Anthony took the wheel himself, leaving the driver as the passenger and totally confusing military and departmental officers who came to meet the car.

Retiring at the age of 54 is rare for a successful politician but Doug Anthony never found politics all-consuming and knew when it was time too move on. As Orwell said of Gandhi, opinions of his life and career will vary, but what a clean smell he leaves behind.

Memories of the Troubles in Timor

Memories of the Wild West