At age 16, in 1940, I was offered a job at Kendenup Stores, a typical country store selling everything from bread to bolts, owned by Mr David H Duff, usually known as Dave Duff, and more usually as Duffy.[i] My appointment was as a result of a recent sacking, which came about as a result of an unexpected return to the Stores by Duffy, who had been checking something on his nearby farm. The sack-ee had been engaged in sexual intercourse with the comely young woman who also worked at the Stores.

I obtained the news of the cause of the sacking at first-hand, as possibly many people did, as Duffy was not a taciturn character. I heard him telling Herb McClure, “I came in just as he was pulling his pants back on, and she, well…” (pointing at the floor) “… there are her heel-marks.”

My days at Duffy’s were most interesting, not least because Duffy was a manager in the true sense of the word. He understood the ways of country people, whether they were old or young. My first name is Samuel but no-one in our large family was called by their christened name.  Mine had suffered, through three elder brothers and no doubt my elder sister, the usual fate of transmogrification to “Plum”. Sam…Samson…Damson…Damson Plum…Plum. I hated Plum as a name, and I had never heard of a damson plum, unbelievably in a township that grew the best apples and stonefruit in the West.

At the Stores (above, as it exists today), I decided I needed a change of name. I said to Duffy, without giving any reason, and of course he knew the nicknames of every child in the district, “I want to be known by my second name, Geoff.” He, being a sensitive soul, and also being built like the man on the label of the Holbrook’s Worcestershire sauce bottle, spread the word and there were no transgressions, bless him.

Duffy had a truck, a very famous truck. It not only was used to deliver all of the merchandise to the Stores from the railway siding, and to deliver orders of goods to some of his clientele, but was the only truck big enough to carry loads of children from the local school to annual picnics. Not many local farmers had cars or trucks even then, the horse and buggy being the usual mode of transport.

Duffy’s truck was a 1926 Willys-Overland Whippet Six (a careful restored model is pictured below). It had a manual gear change, with no such thing as synchromesh, let alone automatic transmission. Its electric charger had long since given up the ghost, and the engine consumed large quantities of lubricating oil. The gear box tended to drop out of any of the higher gears unless the gear lever was held in place tightly, but perversely would remain stuck in low gear of its own accord. Duffy had a peculiar knack of exacerbating these malfunctions, and would ask in his uniquely gravelly voice whether anyone in creation could sort things out.

I had such an ability, even if it was embryonic at this stage. Duffy told me to take off the top of the gearbox, and maybe something would come to mind. There was an internal lever which was partly distorted, and I could see that it had been welded previously and was somewhat misaligned. Maybe if one was careful with the gear stick, some sort of truce could be maintained. I could see that Duffy was not going to spend money on mechanical maintenance, and that tightening up the nuts holding the top of the gearbox was going to be a waste of time. 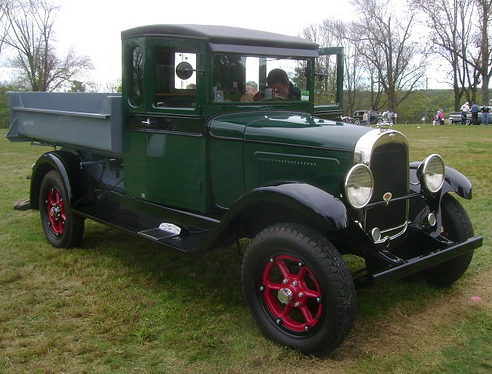 Sure enough, a couple of days later Duffy arrived at the Stores, and both he and the truck were at boiling point.  Trembling with rage as he made his way into the shop, his portly figure shaking, he roared, “Fix the bloody truck, Geoff!” He had got the gears stuck in low gear at the farm five miles away, and had driven the truck to the Stores at a steady walking pace, engine roaring all the way.

I deftly removed two floorboards, undid four nuts on the top of the gearbox, unstuck the gear, put everything back, and filled the radiator with tank water.  Then two minutes later I announced to Duffy’s bewilderment that the truck was ready. “Christ almighty, how did you do that?”

When I had been there for a few months, Duffy’s confidence in me grew enough  for him to leave me in charge while he went to Perth for two weeks, probably to cement firm relations with the insurance company he was agent for, “Sun Alliance”.

I was putting the truck away at evening closing time, and I could not resist flooring the accelerator on the gravel approach to the garage, which was just rough sapling posts and rafters clad with corrugated galvanized iron sheeting.

With great presence of mind, I kept the front of the truck heading for the open front of the garage, and I realized that the only way to arrest its progress was to cut off the ignition. I stabbed at the switch just as the radiator went through the back wall of the garage. Why Duffy even bothered to garage it, or to even have a garage for such a heap of junk, I sat pondering as I listened to the last sheet of corrugated iron hit the gravel. The echoes died away and a sprinkle of chaff and a couple of feathers from a bird’s nest in the roof timbers landed in my lap. Luckily the roof stayed up, and even more luckily, I was the only witness to the episode. An early arrival next morning armed with a hammer and some springhead nails would be required to carry out necessary repairs.

I began more sophisticated vehicle handling techniques after this. Having to hand-crank the engine was acceptable but if it started with the throttle advanced and jumped into a forward gear I was a dead man. Surely a safer method would be to put the gears into reverse, so that when and if it started, I could leap through the open side of the cabin, disengage reverse, engage a forward gear and proceed upon my way. I tried the method a couple of times, but getting run over by the front wheels as they overtook me from behind was less attractive than leaping out of their way as I faced them.

My favorite method was to lock the handbrake, pull the choke out, ignition off, gears in neutral and prime the engine with four turns of the crank handle. Then change the gears to extra-low forward, off with the handbrake. Advance the throttle one third, ignition on, and position the crank handle and heave.  A leap to the left, reach into the cabin to grab the wooden steering wheel and manipulate the gear lever to arrive at a suitable forward speed for the voyage to the next obstacle – the gate to the paddock with the killing shed where the mutton was ready hung for delivery back to the Stores. After a time I became so adept at changing gears without the assistance of the clutch that I wondered why clutches were ever fitted to vehicles.

Nearing the gate I would change noisily down through the gears to extra-low again, reduce the throttle setting, align the front of the truck roughly with the gate centre and leap out. I would race the truck to the closed gate and would barely have it open while the driverless truck ambled through with mostly an inch or two clearance to the gate post. I would close and fasten the gate, as any careful farmer would, and race off after the truck if it looked as if it was going to collide with the fence. Otherwise I would roll a smoke as the truck did a wide circle or two around the paddock before we met on the way to the killing shed. I would stop the engine there, load up the mutton and the entrails and be off to the Stores with only three stops to go. One for the gate, one for the pen containing Duffy’s pigs to dump the entrails (waste not, want not), and one to pick up any deliveries from the railway station.

When Duffy came back from Perth, I had to tell him about some of the additional faults in the truck, convincing him that these had occurred gradually and despite the gentlest of handling. Even the glistening new nails in the end of the garage were explained away with brilliant lies. Maybe the fact that I had managed to cart 50 tons of superphosphate from the railway station to the shed at the back of the Stores during the period of slow but steady mechanical breakdown was believable. However when I tried to show him how to drive the truck without using the clutch, he pursed his lips a bit and rubbed his forehead. “I’m not as agile as you, you young coot! Take it over to Colmer’s and get it repaired, but mind you get a quote first.”

The gearbox remained in a terrible state. Apparently the quote was too high, and as long as I was around, Duffy’s truck would be on the road somewhere. A whippet, it wasn’t.

Quadrant Online readers owe this memoir of life in the vanished West to contributor Tony Thomas, who explains that Geoff Allen was his uncle on his mother’s side. We don’t know when he wrote Duffy’s Truck or, for that matter, where and when the cantankerous vehicle ended its days. Geoff (1924-2000) was a Perth artist and later a maker of bespoke jewelry. Some of his pieces are in the collection of the WA Art Gallery.