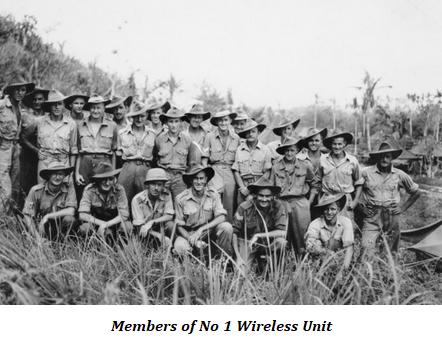 There was a loud rumble and the ground shook for a few seconds. Not far from our house, the concrete walls of Stuart Jail suddenly developed a few visible cracks and just a few miles away,  some national history was obliterated in the blink of an eye.

Tropical thunderstorm? No, the skies over the bush village were clear. Earthquake? No, but a cloud of dust, as if from a mini A-bomb, rose above the gum trees over to the southeast.

It was just  the latest development in a massive land clearing project underway in 1957 to pave the way for construction of Glencore’s  Copper Refinery on the outskirts of the small settlement near Townsville.

This was an area I often visited with best mate Rover, the kelpie cross, and a couple of school pals, because it contained an amazing structure we liked to explore. But we had no idea of its historical significance or why it should have been preserved as a museum piece for the vital role it had played in defeating advancing Japanese forces in the Pacific.

Torches were a necessity to venture inside the old World War II bunker with its three feet thick reinforced concrete walls and roof. Back then, the pitch-dark rooms provided all-weather protection for herds of foraging goats, probably the occasional snake or goanna, and the odd adventurous boy.  Another roofless underground structure nearby was filled with stagnant green water and dozens of breeding cane toads.

After I heard the explosion that day I decided to go and see for myself what the work crews and bulldozers had accomplished in the open bushland we knew so well. We waited until the workers had parked their heavy equipment and gone home or more likely to the Stuart Pub to quench their thirst after a hard day’s toil under a hot sun.

I hopped on my bike and rode out a few miles  with Rover trotting alongside on the dirt road through acres of felled eucalypts and thorny china apple bushes, pushed into piles waiting to be burnt. There was one silver lining in all this destruction, but it carried a sting in its tail. My mates and I had found that some of the felled trees contained bee hives. The native bees provided risk-free honey for the taking, but their larger cousins still protected their hives fiercely, even though they had no chance of survival. Needless to say, we copped our share of stings trying to smoke them out with handfuls of burning grass just to get at the delicious honeycombs.

But I could hardly believe my eyes when I reached the old bunker; or what used to be the bunker and the big underground water tank. Just large chunks of concrete rubble waiting to be loaded on trucks and carted off to God-knows-where.

Sadness gripped me at this latest evidence of the price of progress on our once peaceful boyhood playground. A cement plant had also opened recently, close to the pristine Stewart Creek, and waste slurry was allowed to run off into a gully which flowed into the creek, polluting it for miles downstream with thick, grey deposits. The annual wet seasons and floods removed that and probably distributed it over Townsville Harbour, but in the dry season it would recur.

Maybe the Stuart I knew and loved was about to change in ways I could only imagine, but as I looked at the piles of jagged concrete and tangled steel reinforcement, there was no comprehension of the significance of what had just been destroyed. The place had a fascinating clandestine war-time history, which I have just learned for the first time more than six decades later. 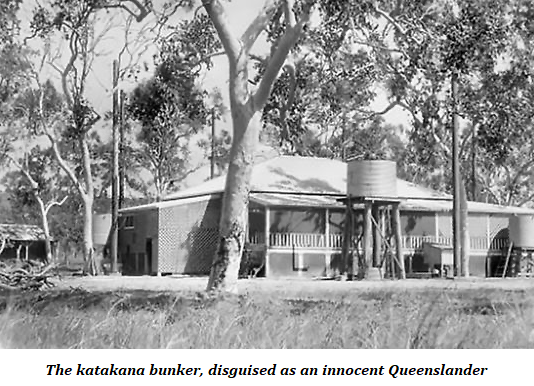 Quite possibly, it had helped us win the war and if things were different back then, it would probably have been restored to its former glory and preserved as a lasting memorial within the boundaries of the copper refinery. Glencore, the refinery owners, have also recognised its significance and belatedly erected a plaque in its place. The following report is taken directly from a company newsletter, which I think is worth repeating for a wider audience:

This year (2020) marks the 75th anniversary of Victory in the Pacific, when Japan surrendered unconditionally to the Allied forces, signalling the end of World War II.

Did you know in March 1942, at the height of World War II, a large secret bomb-proof bunker was built where the Townsville Copper Refinery stands today?

The bunker was built to shelter highly skilled katakana (kana) wireless operators who provided essential intelligence in the lead up to Victory in the Pacific (kana is a radio telegraphy code based on Japanese writing symbols).

Through analysis and cryptanalysis (kana code breaking), the kana wireless operators intercepted Japanese messages to derive critical intelligence informing the Allies when and where the Japanese were about to strike.

As part of the Townsville Copper Refinery’s 50-year celebrations in 2009, the bunker’s location on the current Tankhouse northern roadway was commemorated and the site was identified with a plaque.

The 21 square metre bunker with walls of solid, metre-thick, reinforced concrete was camouflaged to resemble a Queensland style farmhouse. The outside bunker walls were painted to imitate windows, doors, and even a verandah and stilt posts. The concrete structure was topped with a false roof while rainwater tanks adorned the outside and a set of stairs led up to the painted on faux front door.

Even from as close as six metres, it was difficult to determine if the windows and doors were real. Aerials and antennae were hidden among the few remaining eucalypt trees and it would have been impossible for enemy air reconnaissance to identify the building as anything other than a regular farmhouse.

Contrary to the exterior, the fully air-conditioned interior, a luxury at that time, was a highly functioning set-up complete with sophisticated equipment such as plotting and cipher tables, maps, typewriters, telephones, radio receivers and the very latest teleprinters, which were used to help decipher Japanese wireless intelligence codes that would inform Allied military forces.

After the war, the bunker was demolished in 1957 to make way for the construction of the Townsville Copper Refinery. There was no doubt it was built to last, given the amount of gelignite it took to bring it down—some kilometres away, the force of the explosion blew cracks in the outer walls of Townsville’s Stuart Creek prison.

The bunker was the headquarters of No. 1 Wireless Unit, which incorporated a series of RAAF units throughout the south-west Pacific area and directly hooked up to the Central Bureau in Brisbane, one of two highly secret Allied Sigint (signal intelligence) organisations in the region.”

Who’d have guessed it? Not this kid, back on the day it was reduced to rubble! I hope they chased the other goats out before they blew it up.

Of Murder and the Quality of Mercy