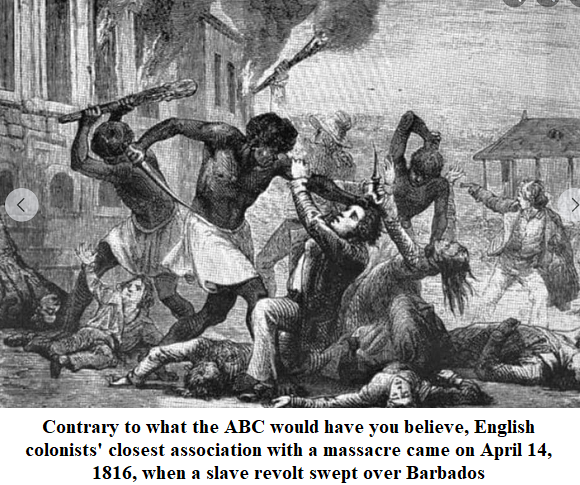 The ABC seems to have invented a genocide by English colonists in the Caribbean. A story on Barbados’ cruel history as a slave island reported that slaver descendants, such as actor Benedict Cumberbatch, could be pursued for compensation and included an assertion that the indigenous population was slaughtered by the English:

This horrific claim is not supported by any evidence. According to historians the original population was depleted in the previous century by Spanish slave raids, with the remaining people fleeing to other islands to avoid being pressed into slavery. The island was effectively uninhabited when the English claimed it in 1625. Two years later, some 80 colonists and 10 slaves took up permanent residence.

This horrific claim is not supported by any evidence. According to historians the original population was depleted in the previous century by Spanish slave raids, with the remaining people fleeing to other islands to avoid being pressed into slavery. The island was effectively uninhabited when the English claimed it in 1625.

Anyone reading the ABC story who turned to Wikipedia for more information would have found the following in the entry on Barbados: “In 1627, when English colonisers arrived in Barbados, they slaughtered the local indigenous inhabitants and claimed the island for themselves.”

These are the words of the ABC story! The ABC did not take the quote from Wikipedia — it was the reverse. The source for the assertion in Wikipedia was, astonishingly, the ABC news story about Cumberbatch. Someone (a Wikipedia contributor screen-named Afa86) added the ABC “revelation” to the crowd-sourced encyclopedia in a textbook example of how false news spreads and becomes part of received history.

Barbados was occupied from about 1600BC by different Amerindian groups. For a thousand years until the 1500s the Arawak, and then the Carib, lived on the island. The Britannica’s entry on Barbados, written by University of the West Indies professor of history Woodville Marshall and two fellow contributors, makes clear the fate of the original population:

The island was depopulated because of repeated slave raids by the Spanish in the 16th century; it is believed that those Indigenous people who avoided enslavement migrated to elsewhere in the region. By the mid-16th century — largely because of the island’s small size, remoteness, and depopulation — European explorers had practically abandoned their claims to it, and Barbados remained effectively without a population.

Fortunately the assertion of indigenous slaughter was removed from Wikipedia a day after publication by a sharp-eyed American veteran editor of Caribbean heritage with the screen name CaribDigita. In justifying deletion the editor commented: “You need a reputable reference that talks about a ‘slaughtering’ in Barbados.”

CaribDigita’s bio says: “In more recent times I’ve been been seeking to calm down conspiracy theories and ‘fake news’ being added to Wikipedia by showing relevant parallels or add references to their sources to help keep this tool from becoming like the National Enquirer.”

The story was amended yesterday (January 22), possibly in response to my request to the author, Recbecca Armitage,  via Twitter for evidence of annihilation of the native population by English colonists. The amendment concedes that the population was largely depleted before the arrival of the English, but continues the unsubstantiated claim of genocide: “They slaughtered the remaining inhabitants and claimed the island for themselves.”

Perhaps the ABC needs to employ CaribDigita as a fact-checker.

John Henningham is director of independent journalism college Jschool. He was previously head of the Journalism Department at the University of Queensland and first Professor of Journalism in Australia. He has worked as a journalist with The Australian, ABC news, Courier-Mail, Daily Mirror and Sun

4 thoughts on “The ABC Massacres History Yet Again”