The Man Who Made the News 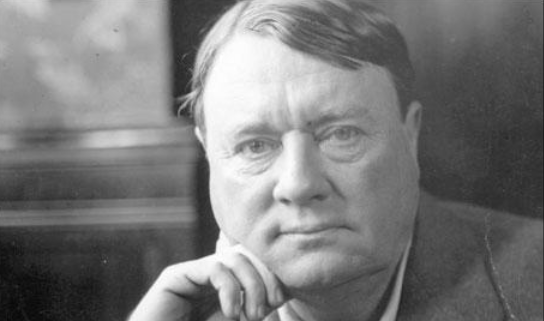 Brash young newspaper baron Lord Northcliffe (above) was perhaps the most hated man in England during World War I. The upper class banned his papers from their clubs and ceremonially burnt them at the Stock Exchange, while pacifists, socialists and many others damned him as a warmonger. Middle England, however, went on buying his newspapers, as it had been doing in increasing numbers for nearly 20 years. Now a new biography, marking a century since his death, argues that readers – and Northcliffe – were often right.

Northcliffe’s problem on the left was that his papers warned for years before the war about the danger the Kaiser’s belligerent Germany presented to Britain and Europe. When Germany invaded Belgium and France in the crisis of 1914, the Northcliffe press took the side, in a wavering country, of Britain entering the war to support France, its ally, and Belgium, to whose neutrality it was committed.

As the conflict dragged on, Northcliffe campaigned for total war, backing conscription to augment the volunteers’ “moral force”, demanding more and better munitions, especially high explosive shells, rather than shrapnel, capable of blasting through the German defences.

He opposed the Gallipoli venture as a “westerner”, believing the war against Germany needed to be concentrated in France. His newspapers led the campaign for Winston Churchill to stand down as First sea Lord of the Admiralty over the Gallipoli disaster, despite the two men being until then personal friends who had been able to disagree cordially about policy.

What upset the upper class especially were Northcliffe’s campaigns against Lord Kitchener, Secretary of State for War, who had been promoted to the public as a saviour, and Prime Minister Herbert Asquith. Subsequent opinion mainly agrees that they were not up to their jobs, but at the time these 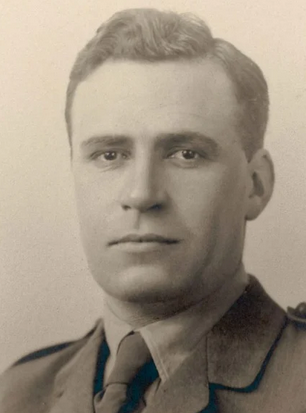 campaigns could seem like sensationalism to sell papers, undermining the war effort and helping the enemy.

One side effect of Gallipoli was that Northcliffe met and adopted as a protege the 30-year-old Australian correspondent Keith Murdoch (left), who had stopped at Gallipoli on his way to London and wrote a damning report on the war there. Murdoch’s permit at Gallipoli required that report to be private, only for the eyes of Prime Minister Andrew Fisher, but he also gave a copy to Northcliffe, who passed it on to the British Government while intensifying his own campaign against the operation. Northcliffe’s coaching and encouragement greatly helped Murdoch develop his own newspaper group in Australia. (His son, Rupert, is acknowledged as a source for this book).

Alfred Harmsworth, who became Lord Northcliffe, began publishing as a teenager from middle London, devising, publishing and profiting from trivia magazines.  He built a stable of more ambitious magazines, like Comic Cuts and made enough money to buy cheaply and improve the troubled Evening News. In 1896 he started The Daily MaiI, which still thrives on the strength of its appeal to the same Middle England whence emerged. His great-nephew today serves as chairman and the Mail’s pages still annoy the same sort of people as they did a hundred years ago. What Northcliffe oversaw was, until the internet changed everything, the birth of the modern daily newspaper seeking to appeal to readers (and voters) well down the social scale. 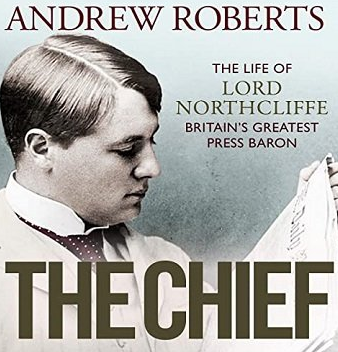 The Times, venerable and stately, but then also financially troubled was an acquisition that brought him status and influence as well as moderate profits when he set its house in order. The Daily Mirror was his pioneering pictorial tabloid, now under its latest new owners and a competitor to Rupert Murdoch’s Sun.

“Wars are not won by milk and roses”, writes biographer Andrew Roberts. “The fact that he controlled some 40 per cent of the British press meant that the government could not escape the ceaseless demands for a more vigorous prosecution of almost every aspect of the war.”

Other than serving as a vehicle for the proprietor’s belligerent  views, his newspapers were good ones — accurate, responsible, professionally admired and much emulated. Apart from strong patriotism and Empire boosting they were politically independent. In keeping with the standards of Middle England, he kept them “clean” (i.e., upholding “family values”). Personally, though, he was a man for discreet mistresses. 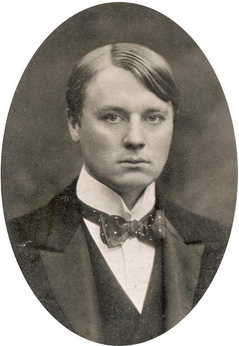 Alfred Harmsworth (at right in his youth) was the eldest of eleven children. He was close to his mother as his confidante, advisor and best friend until he died.  His brother, Harold, who became Viscount Rothermere, was also at his side, as the financial brain that matched Alfred’s ebullient publishing genius.

Northcliffe’s personal and public judgement declined during the second half of the war and he was prone to illness. Some historians have seen this as the onset of megalomania but this biographer suggests there were other explanations. Lord Northcliffe died on 22 August 1922, of  endocarditis, a rare infection of the heart probably caught on a world cruise to repair his health. He was 57. His last writing was a letter to his mother.

As part of his tour, he had stopped off in Australia, liked it and advised Murdoch, the new editor of Melbourne’s The Herald. The year before he had recruited Nelly Melba to sing in the world’s first radio concert, broadcast from the Marconi station in Essex. Courtesy of the BBC’s archives, part of that performance can be heard via this link.

While Roberts captures the enormous strengths of Northcliffe’s convictions, charm and bona fide streak of a genius, he also paints a less flattering portrait of unattractive egotism and obsessions. He could also be very generous and while he made a lot of money, he sought it mainly for the power it gave him to effectively express his ideas.

The book conveys Edwardian England and the anguished, argumentative but honourable and profoundly patriotic wartime years that followed, with the deaths of hundreds of thousands of its young men. Roberts concludes:

Like many other great men he had serious flaws, some forgivable, some not. But his achievements are unarguable: He was the greatest  newspaper man in British history, and he made a major contribution to victory in the First World War.

3 thoughts on “The Man Who Made the News”