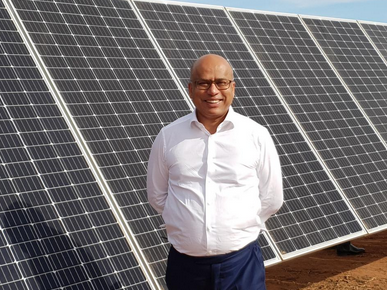 If you have ever wondered how green absurdities become articles of faith and public policy, look no further than the mainstream and specialist media, which has long ignored the maxim that if something seems too good to be true then it probably is. Case in point: the rise of Sanjeev Gupta (above) and, just at the moment, the state of the “green steel” titan’s empire as it wobbles on the brink. For those who haven’t been following the story, the BBC has a very good primer on the Indian tycoon’s woes, albeit focusing almost exclusively on his UK operations.

Closer to home,  those who look askance at the way woke world fantasies of cheap renewable energy are endorsed with taxpayer cash will know of Gupta from his much-lauded arrival in Whyalla, the purported saviour of that down-at-heel South Australian steel town. The ABC’s Stephen Long, for example, was one of many gushing nonsense without qualification in October 2018. “It’s a remnant of the Northern Power Station,” he began his report after noting a lonely chimney rearing above a bare plain, explaining it had been “one of two defunct coal-fired plants here that used to supply more than a third of South Australia’s electricity. Its boilers were detonated last December.”

The wisdom of blowing up key vertebrae in the backbone of South Australia’s energy supply left unquestioned, Long presented more green boosterism from the town’s mayor:

“In 2015 when they announced the closure of the [Northern] coal-fired power station, I said that Port Augusta would become the renewables capital of Australia,” Sam Johnson, the mayor of Port Augusta, said.

“Three years on, I think we have.”

Or soon will be.

That white light on the outskirts of town is a mere taste of the technology coming to Port Augusta on a far grander scale.

Thirteen renewable energy projects are underway or under consideration — from wind farms and pumped hydro-electric power to solar with storage that can shift electricity made when the sun’s shining to meet peak demand in the evening.

It is perhaps unfair to cite only the ABC correspondent’s wide-eyed gullibility because he had plenty of company then and later. The Guardian (of course) thought the entire scheme was a gee-whiz beaut idea, the then-Fairfax papers also raised no eyebrows even when, in 2019, Gupta sought federal government subsidies to keep Whyalla’s green transformation viable. Factor in the clamour of green rent-seekers’ shills — Renew Economy and the like — and the space that should have been reserved in public fora for reasonable and reasoned doubt went almost entirely unfilled.

How could so many have been so thoroughly incurious? Perhaps because the non-specialist media organs took their cues from the financial press. It is here the Australian Financial Review must necessarily utter a ‘guilty, m’lord’, as its pages over recent years have been peppered with reports observed through the distorting dark green lens of unquestioning innocence. The AFR online archive lists more than 200 articles on Sanjeev Gupta, almost all  gushing with praise for his foresight in recognising that the future of the economy in general, and  the steel industry in particular, resides with green electricity.

In September 2017, correspondent Simon Evans said, ”Mr Gupta has plans to upgrade the Whyalla plant and lift its output to tap into burgeoning demand from an infrastructure boom under way in Australia’.

In December 2017, Simon Evans reported “Sanjeev Gupta reveals $1  billion expansion plan for Whyalla steelworks” but added that more government funding than the $50 million offered by South Australia would be needed.

On New Year’s Day 2018, Simon Evans reported again on Mr Gupta, this time quoting Garnaut as saying, “Our energy business is probably going to be the largest business we do in Australia,”

In February 2018, Ben Potter’s “Memo Josh Frydenberg, SA is well on way to 75 per cent renewables”.  That was assuming “Gupta proceeds with the entire 680 MW of solar PV generating capacity (planned for) Whyalla to power the steelworks it bought from the administrator of Arrium last year”.

In May 2018, Ben Potter reported, “Sanjeev Gupta’s GFG Alliance and France’s Neoen Australia have struck a deal to work on the clean energy “revolution of the century”, starting with solar power for GFG’s Laverton steelworks.”  He approvingly quoted Mr Gupta saying, “Renewable energy is at the heart of our Greensteel and Greenaluminium strategies, designed to make metal production and engineering competitive again in developed countries.”

In the same month, Simon Evans reported, “Billionaire Sanjeev Gupta plans Australia’s first battery plant.” And that Mr Gupta also revealed that “GFG would likely be in production with a niche electric vehicle within three years in Australia, with an annual production run of about 30,000”.

In August 2018, criticising “pro-coal power government backbenchers and coal power fans”, Ben Potter wrote, “Mr Gupta this week announced a 280-megawatt solar farm at Cultana in South Australia – the first stage of a $1.4 billion plan to power LibertyOneSteel’s Whyalla steelworks with up to a gigawatt of solar backed up by gas, a huge battery and pumped hydro storage.” This, it was said, would allow solar power backed by gas or storage to make it dispatchable at $40-$50/MWh or “half what we pay now”

On the eve of the present decade (Dec 27, 2019) Angus Grigg listed Gupta as one of the 10 people to watch – the AFR got that one right, especially with the caveat, “The challenge this decade will be to maintain the confidence of his lenders.”

By June 10, 2020, doubts were growing about the Gupta miracle, with the AFR’s Simon Evans reporting that “an expert team will oversee a three-month review of Whyalla to rip out costs for the next three years, while a new ‘green steel’ plant is built”.

It took until March 21 this year for the penny to drop, with the Financial Times asking, “How Sanjeev Gupta lived large on the back of rickety financing”, prompting the AFR‘s  Jemima Whyte and Simon Evans (yes, the same Simon Evans, no longer quite so enthusiastic) to concede “The high-flying world of Sanjeev Gupta was too good to be true”.

It takes a long time for activist journalists to smell a fraud and the AFR, which claims to be the nation’s business journal of record, is short of people who can report news through a filter that detects self-interest when it is clothed in green garments. Sad, isn’t it that, instead of hard questions and deserved scrutiny, today’s media is so very eager to be led down the green garden path.

10 thoughts on “An Extended Romp Down the Green Garden Path”

What the ABC Decided You Didn’t Need to Know

Billions of Dollars More for Their ABC