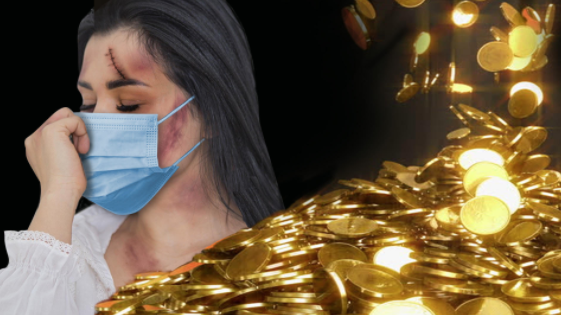 Now for a jaw-dropping story that will leave you marvelling at the brilliance of the feminist enterprise. I’m talking about extraordinary success of last year’s pandemic fundraiser – the mighty domestic violence scare campaign built around COVID lockdowns.

Like all great fundraising campaigns, the concept was simple and based on a tiny kernel of truth – namely, a real risk for women who are locked up for weeks on end with dangerous men. As I have discussed in detail before, there are hundreds of research articles showing this is actually a rare scenario. Most family violence involves aggressive women as well, as men and children are more likely to be cowering from abusive mothers, particularly mentally ill or drug-addicted women, than their fathers. We are spending billions of dollars on a domestic violence industry which misrepresents the truth about family violence and fails to address the real causes.

Naturally no hint of these complexities emerged in the frightening anti-male narrative that quickly dominated our media stories. Within days of our first lockdown warnings emerged that women would be “trapped with their abuser with nowhere to go”. UN Women declared a “shadow pandemic of violence against women and girls” would result from lockdowns across the world.

The ABC naturally was right in there, declaring it was “a particularly dangerous time”, and quoting Women’s Safety NSW CEO Hayley Foster, saying “It’s going to be massive, there’s no two ways about it.”

The push was on for more funding for the domestic violence industry to deal with the looming crisis. “Conditions are akin to a perfect storm”, claimed The Saturday Paper. Experts were trotted out predicting huge increases in DV reports. Kate Fitz-Gibbon, director of the Monash Gender and Family Violence Prevention Centre, warned that leaving a relationship during the pandemic would not be a safe option for many women: “It is terrifying to think what those statistics will be for Australia in 2020.”

Sure enough extra money quickly started to flow in, with Victoria promising an additional $40.2 million, Queensland a $5.5 million boost in funding, and WA adding more than $28 million – all this on top of massive amounts from the Commonwealth, which I’ll discuss later.

But then, disaster. Data started to emerge on actual rates of domestic violence during lockdown, throwing an almighty spanner into the works. In NSW, the Bureau of Crime Statistics and Research analysed police crime data and found

no evidence of an increase in domestic violence since social distancing was implemented in response to the COVID-19 pandemic.

Next a bunch of academics analysed recorded rates of violent crime in Queensland and revealed that, if anything, domestic violence reduced slightly. This inconvenient finding was underscored by a drop in DVO applications to Queensland courts.

Since stage 3 restrictions were reintroduced in Victoria in July, Victoria Police have reported a slight decrease in family violence reports around the state.

And Ambulance Victoria noted a slight decrease in callouts to family violence-related incidents.

So here it was, clear evidence that our media and our governments had been hoodwinked by the feminist propaganda, wrongly maligning all those good Aussie blokes locked up with their families. But naturally none of this received much of a run – the feminist control of mainstream media ensured this profitable fundraiser wasn’t going to be derailed by any awkward real statistics.

Manufacturing data to fit the narrative

The search was on for a means of producing new findings to detract from the true data. Three stars to the Monash Gender and Family Violence Prevention Centre, the first contender to find a way through the impasse.

Boy, was their scheme audacious. They would simply ignore the troublesome data and instead survey people in the DV industry for their opinions about the extent of the crisis. They quickly started surveying members of the army of workers now part of the huge government-supported domestic violence workforce, starting in Queensland and Victoria.

To no one’s surprise, they found that the DV industry thought things were terrible and they needed much more money. And the media responded predictably by spreading this “news.” Here’s The Guardian claiming domestic violence soared in Australia during COVID-19 – “our worst year”.

The DV umbrella group, Women’s Safety NSW, was next off the rank, surveying its own workers. Results were the same — the DV industry thought things were terrible and they needed much more money. The media obligingly broadcasted the findings. Here’s the ABC quoting DV support groups reporting a surge in demand for services.

And so it went on, with QUT Centre for Justice next surveying 362 domestic violence agencies and individuals across the country, and ABC dutifully trumpeting results which revealed “the fear of a shadow pandemic was warranted.”

Isn’t that just so clever? Members of the DV industry continuing to survey each other, using their claims of increased demand for their services to drown out the real evidence that the second pandemic was a total fizzer. That’s quite a Stalinesque plot.

And then their ship came in

Well, what about the loot? Okay, we are starting with a domestic violence industry already receiving about $100 million annually from the Federal Government, with additional funds rolling in from all state governments, corporate and private donors.

But the great COVID fundraiser produced an astonishing 150 per cent increase in their annual handout from the Feds –leaping from $100 to $250 million per annum at least until 2022-23. Not bad, eh? Particularly for a scare campaign which proved demonstrably wrong.

How pathetic that this latest feminist boondoggle has attracted so much more funding than evidence-based causes. In 2020-21 funding for suicide prevention was $65.2 million (most of which shamefully goes to initiatives targeting women even though sic out of eight people who kill themselves every day are male). There are around 3,128 deaths per year from suicide, according to the most recent data, as compared to 35 female deaths from intimate partner violence.

The other night I listened to Paul Murray on Sky News as he ran through all the damage being done by COVID lockdowns. Sure enough, increased domestic violence was on his list. Even conservative commentators have bought into this latest of feminist myths – now part of the popular narrative of COVID’s legacy.

And woe betide anyone who tells the truth.

From one of Australia’s first sex therapists to an outspoken social commentator and advocate for men, Bettina’s long and fiery career has always been about challenging cultural taboos