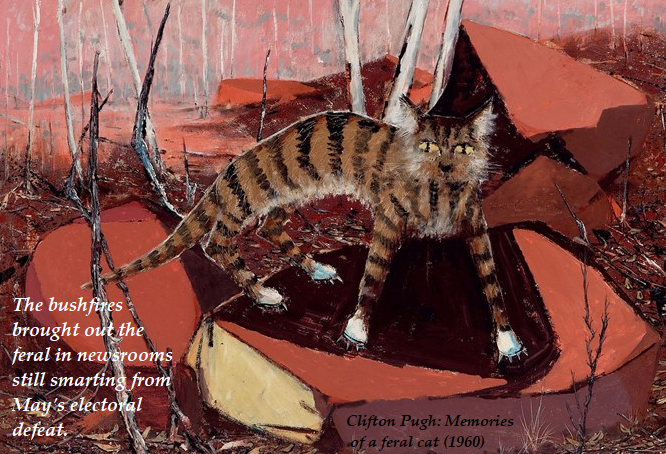 There has been press coverage lately of a poll conducted by Australian National University regarding attitudes to this summer’s bushfires. Given the politicisation of the fires there were no surprises. The poll claimed to have found only “27.3 per cent of respondents reported that they were confident or very confident in the Government”, a low level indeed for a government just recently re-elected. The Guardian, right on cue, referred to the “horror summer in which Morrison chose to holiday in Hawaii”. Does anyone seriously think that, given the irrational and often downright dishonest coverage of the fire season, the poll result would have been any different if he had remained in Australia?

When I read The Guardian’s predictable coverage, I was reminded of Mark Twain’s words: “To not read the news is to be uninformed, but to read it is to be misinformed.” Can anyone doubt that the Australian media’s overwhelmingly partisan outlets played a significant role in shaping opinions about this government’s response to the fires?

Don’t get me wrong, I’m not suggesting Scott Morrison is immune to blunders or poor performance. Certainly, there was valid criticism, some made in good faith, about how he communicated with the public in the fires’ early days (this is an area for political self-improvement and sharper advisers, not a major character flaw), but what we have been seeing on social media is a far different beast from what was once normal criticism. It is yet another example of fake outrage placed at the service of political ends.

We’ve seen “Scotty from Marketing” — a brilliant put-down, by the way — accused of not doing enough, not caring enough, of needing to be shamed into acting, even of forcing people to shake his hand. To reach these conclusions requires Olympics-standard mental gymnastics. These partisans, and the media which gave them a megaphone, are not rational, and in the case of the latter, not ethical either. They are capable of twisting anything that suits their agenda and always eager to do so. As Owen Whalan, an 85-year-old bushfire evacuee from Taree, put it when the PM gave him a hug, “Whether you do something or you do nothing, you’ll always be criticised.”

The fires provided an excuse to rant. For many, Morrison became the villain after refusing to meet media expectations and predictions by losing the last election, the one the Guardian, ABC and Nine papers tirelessly assured us would be all about climate change and the electorate’s fear of a burning planet. When the bush burned, it wasn’t overgrown state forests and fuel loads in neglected national parks that were blamed but coal exports and the like. That the media not only went along with this but actively promoted it might help to explain why Australians tell pollsters they place little faith in what they read.

Graham Richardson wrote in The Australian: “Once you are in the top job you are expected to get it right every time”, but it seems to me there was a special vitriol, an acid distilled equally from electoral frustration and a  virulent contempt, behind the mob assault on the PM and his performance

So why the readiness of some to hate the PM? American economist Thomas Sowell provides a valuable insight: “People do not want a factual or analytical explanation that leaves them emotionally unsatisfied. They want villains to hate and heroes to cheer.” A designated villain enables critics to feel good about themselves, to think ‘Well at least I’m far better than him.’ The PM knows this and has acknowledged: “I know when people get fearful or indeed angry, and they want to express that, and if that means they want to get angry at me, then if that helps, by all means, I’ve got broad shoulders.”

We generally don’t enter a situation free of bias when making observations; rather, we bring pre-existing beliefs and desires of which we are often not even aware. As Australian social scientist Hugh Mackay notes, “the observations we make in life tend to confirm the perspective from which they were made.” For some, a little part of the brain is always on the lookout for a villain, and those so fixated generally find what they seek.

If it’s villains the public want, then the media are shamefully quick to oblige. With selective reporting and spin, they customise villains and present them for a public burning. Strip away the references to Hawaii getaways and whipped-up anti-coal hysteria and the fact remains that Morrison has allocated unprecedented funds and resources to managing the fires and helping those affected by them. He’s also addressed the need to overhaul current conventions so that the Commonwealth can more readily respond to natural disasters. But why dwell on that when a family holiday is there to be presented as one of the greatest outrages against human decency in living memory? For those who derive some satisfaction from knocking the PM and this nation’s government, ask yourselves how well your hate campaigns worked at the last election?

There is still much hard work to do after the fires. They will have long-term implications in ways we can’t even imagine. While some problems can be anticipated, some will be totally unexpected. And let’s not forget that during the clean-up, there are going to be the usual major issues that require government management, such a maintaining a strong economy and maintaining international relations, as always. The knee-jerk naysaying we can expect, the mania that saw bushfires blamed on coal mining, isn’t going to help what is a massive national recovery operation.

Here the media can help. We do not need any more journalists betraying their craft, which is supposed to be  about getting to the truth, by taking their cues and themes from Twitter’s keyboard warriors. The damage the bushfires wrought is extensive and the recovery from them will be long, expensive and arduous. If the critics want to truly feel good about themselves, then lending a helping hand and an encouraging voice is a better way to go. I’d like to think that’s what a true Australian does. I’m also far from optimistic that is what we’ll see.

Anthony Dillon is a researcher at Australian Catholic University. For more, visit www.anthonydillon.com.au

12 thoughts on “The Twitter Mob and Their Newsroom Ferals”