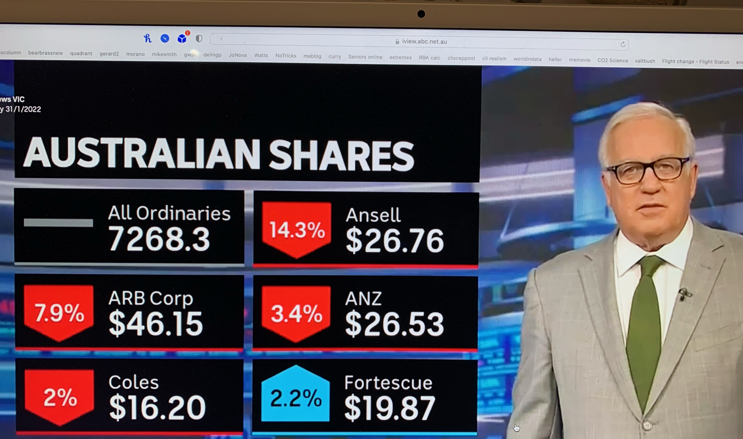 In commercial media, journos have a terror of corrections. It only takes a couple of “We were wrongs” and your career and prospects are ruined. I once caused The Age to publish a correction of more than 200 words — but somehow survived the ignominy.

Journos who are congenitally prone to mistakes move across to the ABC, or so I gather from the rate of mistakes in ABCTV’s nightly sharemarket reports on the flagship 7pm News.

I put in this complaint to the ABC’s watchpuppy about a recent Monday bulletin. Remember, the national broadcaster likes to bill itself as Australia’s “most trusted” news source:

States too, Alan Kohler said “ARB Corporation which makes bull bars among other things jumped 8% after reporting a big lift in sales.”

An ABC graphic alongside wrongly shows ARB shares flagged with red colour and falling 7.9% to $46.15. I am surprised that no-one in the ABC noted the contradiction between Kohler and the graphic.

I suggest that as well as correcting the error, someone in management should counsel the ABC graphics designer and indeed the senior producer of the 7PM bulletin. Why? Because it was only 25 days previous that  ABC 7pm TV News ran a graphic showing SEEK shares closing at $2.55, when the actual closing price was approximately $30.80. I added a PS to my complaint, “It would be a good idea to have someone with some familiarity with the stock market, to check such data before it screens.”

You were gracious enough to acknowledge and correct the mistake on January 12, saying,

“We referred your complaint to ABC News.  They agree that a regrettable error was made when Seek’s share price was transcribed into a graphic.  A correction has been published on the ABC’s Corrections and Clarifications page – https://www.abc.net.au/news/corrections/.  We are satisfied that this action resolves the matter. Thank you for giving the ABC the opportunity to respond to your concern.”

I have previously spotted  wrong graphics such as CSL’s price being shown by your troubled (now-departed) Chief Economics Correspondent Emma Alberici at $7.31 when the real price was close to $300. Thank you for getting that mistake corrected for me, a proud elder of the Australian nation who bought 160 CSL shares 13 years ago for a ridiculous $30 apiece.

Now, I am just one (reluctant) viewer of your 7PM News. A scan of your upheld complaints from other viewers reveals plenty of similar mistakes on share prices. And as only 511,000 Australian TV viewers watched ABCTV News last, say,  Sunday Jan. 30, compared with 960,000 for Seven and 902,000 for Nine, there must be a lot more ABC share price mistakes going unnoticed, or noticed by ABC viewers who can’t be bothered complaining to you.

Ms McLeish, I commend you as Head, Audience and Consumer Affairs, for passing on such complaints to your ABC colleagues and getting the pricing howlers corrected on the ABC website. But although, as you’ve recently informed me, you “are satisfied that this action resolves the matter”, I assume that ABC reporters and producers are incapable of learning from viewer complaints about share mistakes and just continue failing to check facts, unlike normal journalists.

Perhaps the ABC TV News could contract out sharemarket news production to more expert sharemarket observers, and deduct the cost from the $1.1m salary of your managing director David Anderson?  Thanking you in anticipation, Tony Thomas

PS: I think you are doing a good job within the ABC family handling all my complaints, and if coalition politicians force complaints about the ABC to be handled by an external body rather than incestuously as at present, I will be happy to write you a reference for any non-taxpayer-funded new job.

As you can see, I have a warm relationship with Ms Kirstin McLiesh. For interest, here’s a few other corrected ABC share price howlers from the  ABC Corrections and Upheld Complaints Pages:

7.00 News:  A viewer pointed out that the wrong share price for Westpac was shown in a finance segment.

7.00 News: A viewer complained of an error in the reported closing share price of NAB.

7.00 News: A viewer complained of an error in the reported closing share price of CSL on that day. (Yay for me and my CSL share portfolio!).

ABC News Online: A complainant said that a report ‘Slater and Gordon: Uncertainty over law firm’s future, or survival, as share price dives’ included a number of inaccuracies and was misleading. …

Business in 90 Seconds: An ABC News 24 viewer complained that a segment inaccurately stated that the Harvey Norman share price had fallen by fifty two per cent.

News: A viewer complained about reporting of Telstra share prices on ABC News 24, which stated “Telstra shares are down 5.5 percent though, with the future of the National Broadband Network uncertain”. The statement was accompanied by an on-screen graphic, headed ‘Market Movers’, which listed Telstra as being down seventeen cents to $2.79. The viewer pointed out that Telstra shares had gone ex-dividend that day.

7.00 News: A viewer complained that NAB and Telstra share prices were reported to be up when they were in fact down.

Of course there is little reason for ABC people to bother about share price stuff, as they enjoy  at least 15.4 per cent employer (taxpayer) super contributions . If  they’re on the now-closed defined-benefit schemes, they wallow in CPI-indexed lifetime pensions post-retirement like a flock of Scrooge McDucks (plus when they die, spouses/partners take over the pension for their own lifetime).

We’re all in this together, not.

9 thoughts on “‘Most Trusted’ ABC? Trusted to Get it Wrong, That is”

News the ABC Doesn’t Think You Need to Know