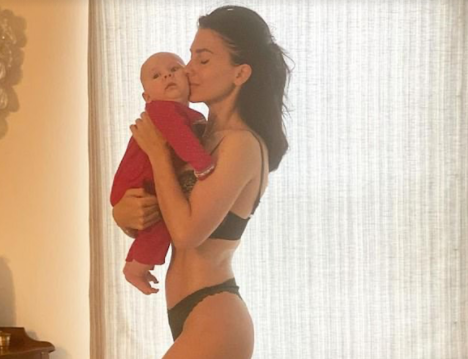 Escandalo! Among Hollywood’s Trump-hating and climate-doom celebrities, actor Alec Baldwin stands tall. I’ve enjoyed his Glengarry Glen Ross movie several times, but he’s a nasty person with sadistic impulses. Plus he’s another of those Hollywood hypocrites, splashing his $US60 million wealth on big houses and big toys in New York, while telling the plebs to catch buses and eat lentils. He sees both “climate denial” and voting for Donald Trump as forms of mental illness.

His wife, Hillary (above), runs a yoga business. She calls herself Hilaria, born in Majorca, but turns out to be Boston-born Hillary Hayward-Thomas (no relation to me). She brought mirth down upon Alec this week. A decade ago she adopted her Spanish persona and accent, plus a Spanish life history rich in paella and flamenco dancing. On a TV cooking show, the Latino lady even had trouble with that English tongue-twister ‘cucumber’ : “We have tomatoes, we have, um, how you say in Eng — cucumbers.”

The narrative fell apart after Hillary/Hilaria posted an inspirational pic of herself in saucy black lingerie and holding Eduardo, her latest of five Baldwinito babies. Comic Amy Schumer re-posted the pic on her own Christmas card with a message: “Enjoy it with whatever family members are talking to you this year.” Hillary/Hilaria, who it seems isn’t very bright, didn’t get the joke and accused Schumer of “body-shaming” her as a recent mother who happened to have shed all trace of flab. While they were duking it out on Instagram, a Hillary ex-classmate who goes by the pseudonym of “Leni Briscoe” (a name that might or might not have been inspired by Law & Order detective Lenny Briscoe), tweeted: ‘You have to admire Hilaria Baldwin’s commitment to her decade-long grift where she impersonates a Spanish person.’[i]

Hillary didn’t re-invent herself for money: she’s worth $US10 million thanks to book and TV deals gathered on her husband’s coat-tails.[ii] She’s also an unofficial brand ambassador for Tommee Tippee baby bottles. She grew up in a five-bedroom Boston mansion in swanky Beacon Hill, almost next door to ex-Secretary of State John Kerry. Now she’s under fire for hogging space in Latin magazines and shows and appropriating the identity of a woke-designated victim class. In 2016, for example, she posted indignantly about how often she is stopped and asked if she’s a nanny because she speaks Spanish.

The angsts of minor celebs is normally beneath the notice of Quadrant writers and readers. But Hillary’s husband’s contortions over the affair, coupled with extensive record of general nastiness and hypocrisy, are too fruity for a local hack like myself to ignore. Alec fulminated in support of his wife , “It is troubling to watch people lie about what you have said and not said. You are the most principled and decent woman I have ever known.”

It was barely a week ago that Alec Baldwin was tweeting to the million followers of his Hilaria and Alec Baldwin Foundation account that if Trump refuses to concede, he should be violently killed, a la George Floyd in Minneapolis. “The thug who has destroyed the country. What does he deserve?” Baldwin asked. “A knee on his neck, cutting off his oxygen? Does he wheeze ‘I can’t breathe?’”[iii] He also proposed that Trump be beaten in the way four policemen beat Rodney King in Los Angeles in 1991, which led to arson and riots. “Just whale away on him like a piñata? Rodney King style?” Baldwin suggested.[iv]

Last month Baldwin called for President Trump to be buried in a Nazi graveyard with a swastika placed on his grave. One responder added, “No. he does not deserve a burial. Dump him in an unmarked grave or better yet in a crematorium.” Baldwin has also called Trump a “fascist whore” needing to be “removed from our lives”. The multi-racial supporters whom Trump enlisted at his National Convention in August were, according to Baldwin, high on drugs.

In February, Baldwin likened Trump’s rise to power to that of Adolf Hitler, saying, “You wonder how Hitler took control of a once great country. For those of you too young to remember the War or its aftermath, simply watch how this [Republican] Senate behaves. Their snivelling fealty and lack of courage… And you begin to get it.”

In May, Baldwin declared that President Trump “has a degenerative mental illness that is costing 1000’s of lives.” He tweeted, a little histrionically, “Trump’s presidency must die so that we can live.”

As for every movie star’s hobby of saving the planet, Baldwin said at the Paris 2015 summit that “this may be our last chance in the next 20 years” to take action against global warming. “There are things that we just can’t imagine that can happen in terms of the food supply, in terms of climate change, in terms of flooding in coastal areas in the United States and beyond,” he said. “The time is now to make certain sacrifices … so that this planet will remain habitable for today’s children.”

Alec Baldwin’s bad temper is documented from way back. In a custody dispute over his daughter, Ireland, with mother Kim Basinger in 2007, Basinger’s lawyers surfaced a voicemail of him abusing the daughter as a ‘rude, thoughtless, little pig’. He told her, “You don’t have the brains or the decency as a human being. … I don’t give a damn that you’re 12 years old, or 11 years old, or that you’re a child, or that your mother is a thoughtless pain in the ass who doesn’t care about what you do as far as I’m concerned. … You have humiliated me for the last time with this phone.”

Getting back to his spouse’s Dunciad[v], Hillary once told Vanity Fair España that her “Spanish” parents had difficulty pronouncing her married surname “Baldwin”. Actually, Mama is Harvard med-school ex-professor, Dr. Kathryn Hayward, whose family is fourth-generation Boston Brahmin, and Pop is David Thomas, a Georgetown educated lawyer hailing from Vermont. (As already mentioned, not a relative of mine).

Now Hillary has admitted she’s Boston born, saying: “Yes, I am a white girl Let’s be very clear that Europe has a lot of white people in there and my family is white. Ethnically, I am a mix of many, many, many things. Culturally, I grew up with two cultures so it’s really as simple as that.” Hillary explains, “I care because my thing is about being authentic — and then if people say I’m not being authentic, it hurts my feelings … ” She asked social media gawkers at her part-clad pics to be “a little bit kinder,” especially after a year when everybody is “suffering mentally.”

Perhaps her least likely claims were that she’d never owned a TV set and that when she fell for the ageing Alec, she had no idea that he was a movie star. “So what do you do?” she supposedly asked him, guilelessly. He’s 62, she’s 36, by the way.

Somehow borrowing identities is quite a trend. Apart from Democrat icon Elizabeth “Pocahontas” Warren, there is the famous Rachel Dolezal, aka Nkechi Amare Diallo, who despite her two white parents rose as a “black” woman to chapter presidency of the National Association for the Advancement of Colored People.

The pinnacle of role-snaffling was reached by left-feminist author/academic Jessica Krug, who claimed variously to be half-Algerian-American, half-German-American, and an “Afro-boricua” from The Bronx, nicknamed “La Bombalera.” She admitted in September she was actually a Jewish lass from Kansas, who had lied first about North African blackness, then US-rooted blackness, then Caribbean-rooted Bronx blackness.

Not that we are immune from such things in Australia. Between the 2011 and 2016 censuses, 130,000 people newly-identified as Aboriginal. Many claimants had compelling reasons but at least one New Age lady learnt she was Aboriginal via conversations with her chooks, and featured in one of those erudite Griffith MA theses.[vi] A recent spectacular Aboriginal identification was by “Aboriginal historian” Bruce Pascoe, now a Professor at an obscure Melbourne university, whose four grandparents are from the UK, and who mysteriously claims to be both “solidly Cornish” and “solidly Aboriginal”.[vi]

As for Mr and Mrs Baldwin, there’s a moral from their discomfiture, which in my native tongue of Spanish is:  Me importa un pepino.[vii]

[i] They were both from the elite Cambridge School, Massachusetts which a decade or two ago charged day students $US52,400 per annum.

[ii] Her 2016 book was titled, ironically, “The Living Clearly Method.”

[iv] Three of the police were acquitted, the other involved a hung jury

[v] Alexander Pope, whose poem “celebrates a goddess Dulness  [sic] and the progress of her chosen agents as they bring decay, imbecility, and tastelessness”.

[vi] “I was just different, really different, in that all the animals were my friends and I used to spend hours in the chook yard talking to my chooks, because like they were the only ones who understood anything that I was feeling or that I was thinking, but I felt very isolated and lonely growing up and always in my whole life just searching and wondering who I was.”