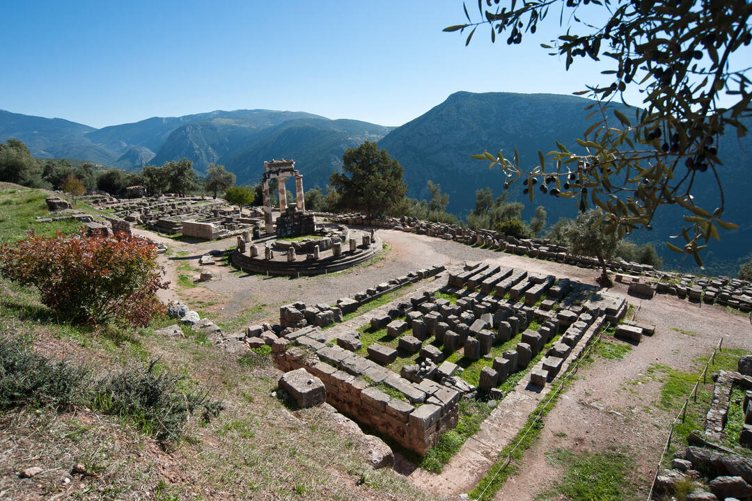 As COP27 was coming to an end – culminating in a vague proposal to establish a weather loss-and-damage (L&D) fund inevitably trumpeted as “historic” and “game-changing” – a UNESCO event began in Greece at Delphi (above), what was the centre of the ancient world.  It was a more modest affair yet a most instructive one, revealing how insidious the rhetoric of climate change (CC) alarmism has become, infecting every division of the agency – and indeed the modern world — like an incurable cancer or virulent virus.

But before we go there, a post-mortem on my previous post: In Egypt, climate catastrophism as usual . As one reporter, possibly recovering from a bout of ecstatic relief or COVID-19, as was US Special Climate Envoy John Kerry and God knows how many other poor souls among the more than 30,000 attendees at Sharm El Sheikh, cautioned:

Sunday’s COP27 agreement still needs countries to thrash out details, such as where the money should come from and which countries or disasters qualify for compensation.
— AFR explainer, Nov 20, 2022

Such critical matters have been kicked down the carbon-credit road all the way to COP 28, scheduled for Dubai in November, 2023. Conferences of the Parties (COPS) go on forever, of course, just like the weather and human folly. The outcome is hardly surprising. A recent estimate of “climate-linked losses” by “vulnerable” countries claimed they could exceed an annual $US500 billion by 2030. That’s more than three Qatari football precincts every year.

Meanwhile, Vanuatu has asked the International Court of Justice to issue an opinion on its ‘right to be protected from adverse climate impacts’. Good luck with that exercise. It’s up there with the folk who want to sue God; or game a gullible developed world that has pleaded guilty to climate crimes it did not commit: whenever life’s lottery delivers a nasty surprise, meteorological or otherwise, just call the Loss & Damage Fund.

At first glance, Delphi seems an odd choice for the 50th anniversary celebration of the 1972 UNESCO World Heritage Convention: “The Next 50 – The future of World Heritage in challenging times enhancing resilience and sustainability”. After all, there currently are 1,154 cultural and natural sites, 43 transboundary and 167 States Parties areas to choose from on the World Heritage List (WHL). UNESCO could have chosen instead Argentina’s Quebrada de Humahuaca, Armenia’s Monasteries of Haghpat and Sanahin, Antigua’s Naval Dockyard and Related Archaeological Sites, Gabon’s Ecosystem and Relict Cultural Landscape of Lopé-Okanda, or closer to home,  The Great Spa Towns of Europe or Nice, Winter Resort Town of the Riviera.

Given the Zeitgeist, maybe it was a close race with The Cave of the Apocalypse on Patmos in the Dodecanese. St John the Theologian reputedly wrote his Gospel and the Apocalypse there around 95 AD. The Cave, hardly big enough to swing a cat let alone a catastrophe, would have been too small for a conference. However, the monastery built nearby in the late 10th century would have been ideal for what has become a quasi-religious movement.

As for Australia, there are 20 WHL properties here, five mandates to the World Heritage Committee and 80 State of Conservation reports. The Budj Bim Cultural Landscape (2019) is there, and of course the Great Barrier Reef (1981). Once classified as “endangered”, it is hard to get off the WHL, as the IPA’s Peter Ridd, former Professor and Head of Physics (2009-2016) at James Cook University, and Dr Jennifer Marohasy discovered after their extensive fact-finding work on the Reef.

UNESCO, then, chose Delphi over other locations in Greece and elsewhere. Having visited the site, drunk from the Castalian spring in the Papadia Ravine on Mt Parnassus, now dry due to climate change  or divine wrath; and also channelled what might have been the ghost of Pythia, the Temple of Apollo’s high priestess, or a trick of the mind, my conclusion: Delphi was not a random choice.

UNESCO selected – some might say weaponised – Delphi not only because it was the most sacred place in ancient Greece and location of the omphalos  or “navel-stone”. It was also home of the Oracle, hence an ideal location to promote the UN’s “climate catastrophe” ideology. We will never know, but there may have been another reason: the first diviner to occupy the Delphic Oracle was Gaia, the mother of the gods, a connection that would appeal to those devoted to conservation, or who imagine they are rebelling against “extinction” and saving the planet.

As for Pythia, derived from Pytho, the name of Delphi in myth, it comes from the verb πύθειν (púthein) “to rot”, and refers to the stench from the decomposing body of the legendary Python. The original guardian of Gaia’s Oracle, it was slain by Apollo.

After all, it was to Delphi and its Oracle that people from all over the ancient world came to hear prophecies, to be told what fortune or tragedy lay in wait for them, and to receive wisdom on how to respond. And if I may add another thought: the Oracle was extremely resilient because she never gave very exact answers to the questions people asked her. — Kyriakos Mitsotakis, WHC address, November 18, 2022

He was right. Given the ritual, it’s hardly surprising. The Pythia was a peasant woman over 50 years old. After purifying herself in the Castalian spring and chewing a laurel leaf, she sat on a tripod placed over a nearby chasm. Intoxicated by exhalations that apparently came out of it, she uttered incoherent sounds, which were interpreted in hexameter verse by the Ὅσιοι [Osioi], ‘the holy ones’, who sat around it.

Anyway, she seems comparable to today’s computer modellers of the planet’s future climate, at least in her ability to attract disciples and pilgrims, and in her prophecies: invariably obscure or ambiguous.

Even the great benefactor of Delphi, Croesus, was “cruelly misled” by the Oracle. On the eve of his war with Persia, he was advised: “If you attack Persia, a great power will be destroyed”. It indeed came to pass, but the great power was him.

What was essential to Delphic divination – and also atmospheric prognostication today — was “the frenzy of the Pythoness and the sounds she uttered in this state of possession”, probably resembling the shrill cries of a young or old CC activist in full-fright.

As for extreme weather events (EWEs), there’s always one close by when you need it.

Fast forward two and a half millennia to this summer. We all saw clearly here – very close to Delphi again – a warning of the future that could be in store if we don’t all listen and learn. It came from a fire that started in a village very close to here, just 15km from this site. It was ignited in a summer that was Europe’s hottest on record. Fanned by high winds, it became a violent blaze that tore through the largest and continuously cultivated olive grove in Greece. Fortunately, it was contained in a 3,000 square metre area, leaving the biggest part of it unscathed.

I cannot think of a clear example of how the preservation of our cultural monuments and natural heritage is part of one and the same effort. It was exactly this ground-breaking insight that the WHC enshrined in 1972 when it was created in Paris. Since then it has proven to be the bedrock on which all kinds of heritage preservation has been built. It shaped a common understanding of what protection means and has been the foundation of new institutions, procedures and so on, a banner under which all conservation expertise could rally. — Kyriakos Mitsotakis, WHC address, November 18, 2022

Delphi was, he continued, the ideal place to reflect on the “mapping of dangers”, local, regional and global. The conference would focus on two threats that “would have a decisive impact in the near future – the climate crisis and over-tourism.” The Greek government was “fighting the consequences of climate change: extreme temperatures, heavy rainfall, rising sea-levels, worse and more severe EWEs and wild fires. There had been landslides and rock falls at Delphi, yet no mention was made of Greece being a seismically active region.

Making a “green transition” was a “non-negotiable priority” for the government. Moving to a “future powered by renewable energy (RE) was a wise choice, not just from a climate perspective … Greece is ranked eighth in the EU in RE utilisation. We managed to power the country for five hours a month ago with wind turbines.”

“Delphi is an ark guiding us towards a more sustainable future”, concluded the Prime Minister. If so, pray that its oracular CC navigators are superior to the Pythia, and that they can steer a sensible course without resorting to laurel leaves or another addictive narcotic: utopian fantasy.

Technical presentations began in earnest on the second day of the conference with Constantine Cartalis, a professor of environmental physics. He warned delegates that “compound climate events” were emerging as an important issue. They added a new dimension that had to be taken on board.

As for climate change, you will not be surprised to learn it’s “the greatest single threat to world heritage, threatening at least a third of all sites, with marine sites affected disproportionally.” And so on and so forth. (from 5hr.50min)

As we drove down from Delphi and across the fertile plain of Kris to catch the Zeus from Galaxidi, I asked the guide about two curious inscriptions we saw on a pillar in what remains of the Temple of Apollo.

They were, he said, probably ancient graffiti, carved there by a pilgrim unhappy with his or her session with the Oracle. Intrigued, I asked whether he made any sense of them.

“They were written in Attic Greek,” he replied. “I’m not an expert, but I think they said:

“Make a climate pledge and mischief is nigh.”