Junk Science on the Koala Coast 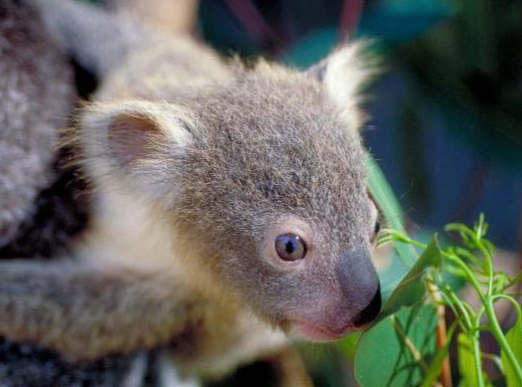 European exploration of Moreton Bay District started with a two-day visit by Matthew Flinders in 1799. Surveyor-General John Oxley explored the area over 11 days in 1823 and 1824. He rescued two shipwrecked sailors who had hunted, gathered and fished with local Aborigines for seven months. A penal colony was established at Redcliffe in 1824 and moved to Brisbane in 1825. Convicts were employed in farming, grazing, timbergetting and mining. There were extensive explorations by Captain Patrick Logan, Edmund Lockyer and Sydney Cotton, Foreman Petrie and Botanist Allan Cunningham. Detailed trigonometric surveys occurred before the first land sales in 1842. There were no reports of koalas.

John Gould published the first reference to koalas at Moreton Bay. He never went there, but his collector, John Gilbert, arrived at the nearby Darling Downs in 1844, whence he set off with Leichardt’s expedition. Gilbert wrote to Gould before he departed from the Downs. He was killed by Aborigines near the Gulf of Carpentaria in 1845. Gilbert had learnt of koalas at Moreton Bay from Leichardt who was told about them by his Aboriginal guides and by an escaped convict who had lived with Aborigines at Moreton Bay and on the Darling Downs.

In October 1843, Leichardt was apparently presented with a young animal which he kept for a few days and dissected after it died. Leichardt wrote that the koala “lives on the leaves of the appletree” [Angophora] and “old men eat it, not the young ones”. He did not record any other koalas whilst exploring and collecting between Botany Bay and Hervey Bay from April 1842 until March 1844.

As a boy around 1890, Thomas Hardcastle witnessed a corroboree at his grandfather’s property near Boonah, on the southwestern margin of the Moreton Bay District, where he saw “heaps of wallabies, paddymelons, possums, native bears, etc., being prepared for cooking”.

In 1904, Alfred Howitt reported that newly initiated young Aboriginal men of the coastal Jeeparra Clan were allowed to eat “kangaroo, male opossum, native bear, and honey” in their probationary period. During this time they were “practically placed in a state of privation, while being possibly surrounded by plentiful but forbidden food”. The implication is that koalas were hard to get.

Apart from these three references, there were no reports of koalas at Moreton Bay prior to 1900, when they suddenly became abundant. By 1908, in the grip of Federation Drought, koalas were once again scarce. Greg Gordon and Frances Hrdina used records of stock inspectors, rangers, foresters and police from 1890 to 1936 to document koala population irruptions and crashes throughout the state. No koalas were reported from Moreton Bay District after 1931.

Koalas were supposedly extinct in southeast Queensland, NSW, Victoria and South Australia by 1934, as shown on a map drawn by the founder of the original Koala Park in Sydney. The only known wild koalas south of Central Queensland were the artificial colonies established on islands in Victoria’s Westernport Bay. 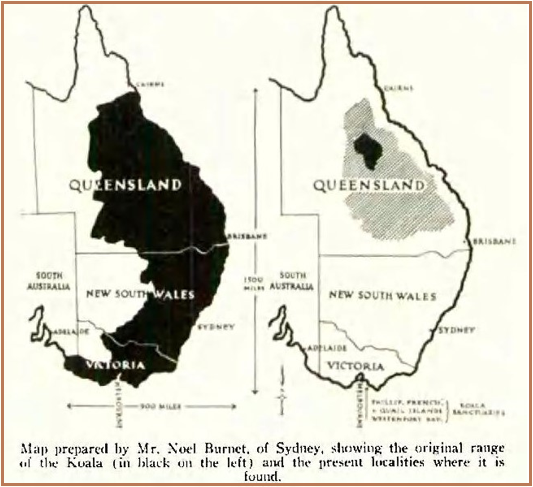 In 1966, Professor of Zoology A.J. Marshall wrote that “few Australians have ever seen a wild koala”. By 1976, forty-three experts in a symposium at Taronga Zoo reached “unanimous agreement that the koala is no longer an endangered species”. They reported “large, growing populations” across the koala’s range.

The first ecological study of koalas at Moreton Bay was in 1987/88. They had increased after grazing and burning were curtailed for residential development. Eucalypts declined and began recycling soft young shoots – high quality koala food. The density of koalas, 0.4 per ha, was supposedly “relatively low”, but koalas were easily visible. Sixty-seven per cent of females bore young, even though 12 per cent of the sub-population suffered chlamydiosis. Eight percent died during the study. The koala population was increasing rapidly.

In 1997, NSW Forestry reported the ecology of a natural, low-density sub-population at Eden. The average home range was 169 hectares, corresponding to a density of 0.006 koalas per hectare. The density of koalas on the newly designated ‘Koala Coast’ was 70 times greater, while other studies had reported up to 1300 times higher densities.

The Sydney Morning Herald had earlier spruiked that

Forestry Commission’s koala research program in the south-eastern forests should be taken over by experienced biologists, according to two internal Government reports … the research will not properly assess the impact of logging on … one of the few natural populations remaining in NSW.

After the “leaked reports”, National Parks and Wildlife Service replaced the radio-tracking with ineffective postal surveys and faecal pellet surveys. Later on, they used this minimal data in a model

which supposedly proved that koalas were extinct in most of the region. NPWS dismissed inconvenient records, claiming in a scientific journal that one sighting “does not demonstrate” that koalas are still there. I showed NSW Koala Inquiry photos of an extinct koala, but they weren’t impressed either.

Whilst ecological information was emerging about natural low-density sub-populations, experts declared the unsustainable density of the koala populations in southeast Queensland to be “relatively secure”. According to the state government, densities of koalas ranged from 0.02 to 1.26 koalas per hectare. The independent experts reported that densities varied from 0.2 koalas per hectare in the bush to 0.8 in suburbia. It doesn’t matter whose estimates you prefer, there were too many koalas.

Around the Millennium Drought from 1997 to 2009, Queensland’s Government reported numbers on the Koala Coast dropped from 6000 in 1996 to 4600 in 2006 and 2000 in 2010. The experts reported a 75 per cent decline between 1996 and 2012. The steepest decline was in suburbia, where initial densities were highest. The rate of decline flattened after the drought broke. Average densities in both bushland and urban areas were ~0.1 koalas per ha in 2012. They were still unnaturally high.

In 2010, a Senate Inquiry received evidence of large numbers of koala skins produced after 1887, and associated propaganda from groups such as Australian Koala Foundation and World Wildlife Fund.  They reached an erroneous and illogical conclusion:

It is estimated that the koala population prior to European settlement was in the order of up to 10 million koalas.

Their first five recommendations were all concerned with numbers, for example:

The committee recommends that the Threatened Species Scientific Committee provide clearer information to the Environment Minister in all future threatened species listing advices, including species population information, and that the Threatened Species Scientific Committee review its advice to the Minister on the listing of the koala in light of the findings of this inquiry.

Consequently, koalas north of Victoria were listed as ‘vulnerable’ in 2011 and experts gathered in 2012 to invent some data for the next stage of their campaign. Fifteen experts and two facilitators used a Delphip process, named for the Oracles. They published the numbers in 2016, boasting that

It was not necessary to achieve high levels of certainty or consensus among experts before making informed estimates. A quantitative, scientific method for deriving estimates of koala populations and trends was possible, in the absence of empirical data on abundances.

These are their fanciful numbers for the Koala Coast:

In 2022, after an obligatory 10-year ‘monitoring period’, the Threatened Species Scientific Committee, armed with the Oracles’ ‘data’, advised the Minister to declare northern koalas as officially Endangered. ABC News reported

Koalas are now considered an endangered species in NSW, Queensland and the ACT, as numbers plummet due to climate change, land clearing and disease.

More than 20,000 koalas were submitted to veterinary hospitals on the Koala Coast from 1997 to 2013. Fifty-two percent were diseased, 16 per cent had suffered traffic accidents and 14 per cent were wasting. But vehicle injuries declined by a third while wasting as a proportion of total hospital admissions increased roughly six-fold during the drought. Pathologists found that chlamydia caused morbidity, sterility and mortality, but not declining numbers, because more young survive when more adults die.

Meanwhile, in central Queensland, very low-density populations persisted in what were supposed to be poor quality habitats whilst dense sub-populations in supposedly high-quality riparian habitats were decimated or eliminated. For example, numbers crashed in pastoral holdings around Minerva Hills National Park, whereas koalas persisted in the bony hills of the park at densities of 0.02 per hectare.

The crash on the Koala Coast was not from habitat loss. The experts explained it as “extinction debt, where populations continue to decline long after the main habitat destruction occurred”. But koalas were increasing until the drought. Between 2009 and 2014, 180 koalas were moved out of the way to allow construction of a shopping centre at Coomera. Forty-two per cent died in their new habitat. Of the overcrowded animals which weren’t moved because they weren’t in the way, fifty per cent died.

Ecologists controlled wild dogs and disease in another Koala Coast sub-population, from 2013 to 2017, whilst 62 hectares of bush were being cleared for a railway. Forty-one wild dogs were destroyed. Of 144 koalas known to be eaten, 81 per cent were taken by wild dogs, 15 per cent by carpet snakes and 4 per cent by domestic dogs. Population density was ~0.2 koalas per hectare. There was 15 per cent annual mortality of adults; 63 per cent by predation, 29 per cent by disease and 3 per cent by road-accident trauma. Population growth rates were 0.7, 0.9, 1.1 and 1.2 over the four years.

Treatment of chlamydiosis and destruction of wild dogs obviously had some benefits for individual koalas, but no benefits for species conservation. At a growth rate of 1.2, the already unsustainably dense population would double in four years. A fundamental problem with managing iconic species is the assumption that more is better.

High mortality of koalas in queensland during the 1920s was attributed mainly to overly dense populations, drought, disease and predation by dingoes and foxes. Low density sub-populations have chlamydia but not chlamydiosis. Disease is a consequence of overcrowding and malnutrition. Predation, disease or drought have not adversely impacted the few low-density koala populations that have been studied intensively.

Koalas in South Australia and Victoria are the same species as northern koalas. When unsustainably dense southern populations suffer, the experts call it ‘over-browsing’ and ‘translocate’ koalas to die out of sight somewhere else. When overcrowded northern koalas suffer in droughts, the experts use the Climate Change Cop-Out.

What the Oracles know about koalas — the facts, not the myths — is dwarfed by their capacity to obfuscate what should be blindingly obvious.

There really is Climate Change

From food bowl to dust bowl

Suffer the Little Children to Come Unto Green