Hooray! I’ve forced the ABC to correct one of its  howlers in global warming reportage. On September 2,  I wrote in Quadrant Online about Harvard History of Science Professor Naomi Oreskes and her forecast that global warming would kill everyone’s puppies and kittens in 2023, followed by the entire population of Australia. Admittedly, her book was supposedly written looking back from 400 years into the future, but as she put it, it was all based on genuine Climate Change Science ™.

“Yes, not only because it’s an animal but it’s local. You see, one criticism of the scientists is they’re always talking about global things … And so if you are looking at your village, your animals, your fields, your park, your kids, and the scientists are talking about a small world that you know, than it makes a greater impact, doesn’t it?”

“Well, exactly. It was about bringing it literally home, literally into your home, your family, your pet, the dog or cat that you love who is your faithful and trusted companion.”

If you go to the ABC Science Show site at you will now find this correction:

Editor’s note: The original introduction stated that “Earth’s climate is changing at the highest of predicted rates, scientists have given up on the much talked about two degree ceiling …”  In context these words telegraphed the premise on which Prof Oreskes’ work of fiction is based; however, it has been interpreted as a statement of incontrovertible fact and has therefore been removed to prevent any further misunderstanding.

This is an almost-OK response by the complaints department. Timing-wise, the show was aired on 16 August, my complaint was on September 1, and the correction posted on September 23 — expeditiously by ABC standards. My only quibble is that Williams and the ABC still cannot bring themselves to admit publicly that saying “earth’s climate is changing at the highest predicted rates” is flat-out wrong, the opposite of the truth, whether or not the assertion is real or made “fictively”.

My suggestion is that, now the ABC has begun behaving almost like an impartial taxpayer-funded news institution, we should use the complaints mechanism on every occasion the national broadcaster  falls into error on climate and/or politics.  No one can now say such complaints will be frivolously dismissed or ignored.

The introduction [to the Science Show’s Oreskes interview] says, “The Earth’s climate is changing at the highest of predicted rates.”

The IPCC in its final draft for its 5th Report, showed actual temperatures running below the lowest bound of the IPCC forecasting.

This graphic (re-produced below) was omitted  in the published report, 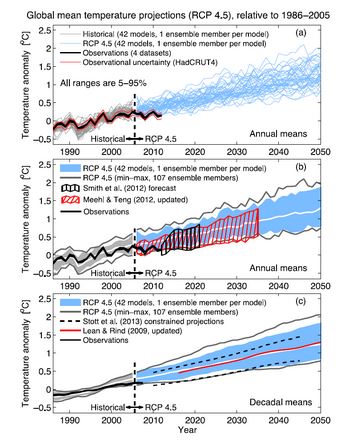 However, an analysis of the full suite of CMIP5 [modeling] historical simulations   reveals that 111 out of 114 realisations  [forecasts] show a GMST [global mean surface temperature]  trend over 1998-2012 that is higher than the entire HadCRUT4 [actual temperature] trend ensemble  ” Chapter 9, WG1, Box 9.2

In other words, actual temperatures are running lower than  97% of the forecast runs, not at “the highest of predicted rates” as claimed by   the Science Show.

I would like to see this false and misleading statement corrected on The Science Show.

Your complaint has been considered by Audience and Consumer Affairs, a unit which is separate to and independent of content making areas within the ABC. Our role is to review complaints alleging that ABC content has breached the ABC’s editorial standards. These standards are explained in our Editorial Policies which are available here – http://about.abc.net.au/how-the-abc-is-run/what-guides-us/our-editorial-policies/.

The intention had been to convey Naomi Oreskes’ view but having been alerted to your complaint, the program acknowledges that the sentence read on the website as an incontrovertible fact and have undertaken to remove it.  An Editor’s Note has been added to the page.

Audience and Consumer Affairs is satisfied that these steps are adequate and appropriate to remedy the cause of your complaint and accordingly we consider it resolved.

Thank you for giving the ABC the opportunity to respond to your concerns.

I say modestly, no, don’t give me credit for this virtually unprecedented backdown by the ABC on global warming catastrophism. Credit belongs to level-headed sceptics everywhere  in what Shakespeare once described as “a naughty world.”

And, if I may say so, Long Live the ABC!