Eureka! They Have Clowned It 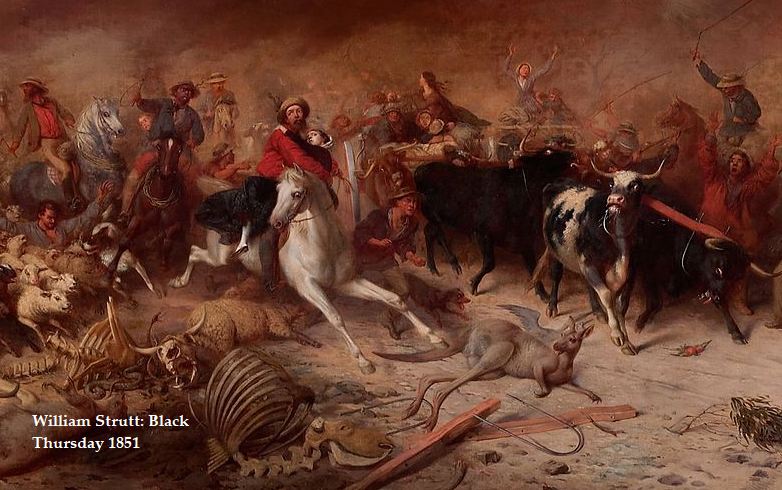 Three centuries before Christ, Archimedes jumped out of a bath and ran naked through the streets of Syracuse shouting “Eureka!”. That’s Greek for “I have found it”. What he found was a scientific method to expose a counterfeit ‘gold’ crown. Well now we see the NSW Bushfire Research Hub being awarded a Eureka Prize crown for “applied environmental research”, the learned professors and doctors boasting they provided “lots of” science which “directly influenced” the state’s inquiry into our Black Summer bushfire disaster. “We tackled the big questions,” they claim, “including drought, fire weather, ignitions and fuel management.”

‘Tackle’, indeed! They didn’t even get off the bench.

In the early 1790s, during the Settlement Drought – the worst in 500 years – there were three consecutive summers of extreme weather. Masses of flying foxes and lorikeets dropped dead in Parramatta during three straight days of blistering northwesterly gales. Aboriginal fires were burning 24/7. Huts were clad with bark and thatch. There were no disasters and no fatalities. Settlers controlled wildfires with hand tools and green branches.

During Black Summer 2019/20, conditions were no worse than those faced by the First Fleeters. But climate change enthusiasts in the Bureau of Meteorology don’t recognize any weather records before 1910, so the unprecedented disasters were attributed to ‘anthropogenic global warming’ — the roughly one-degree increase in temperatures since, and supposedly set in motion by, the Industrial Revolution.  Consequently, the apologists for failure would have you believe, our modern emergency services generals, with their columns of fire engines and squadrons of water-bombers, were unable to protect homes clad with brick, tiles and steel in country where Aborigines lived safely for thousands of years. A single lightning strike ignited the Gospers Mountain fire of half a million hectares, the resulting firestorm exploding from huge loads of continuous fuels that Aboriginal burning practices would never have tolerated.

ThE NSW Bushfire Hub is a triumph of academic self-promotion over experience and commonsense. It arose from a parliamentary inquiry into the devastating 2003 fires which left “A Nation Charred”. Those fires, which destroyed some 500 homes in Canberra, were ignited by lightning strikes in Kosciuszko National Park. The same storms ignited a large number of fires in adjoining well-managed lands, where they were quickly controlled with negligible damage.

The Nairn Inquiry which produced A Nation Charred heard evidence from experienced land managers across Australia and concluded that the problem was accumulation of dangerous fuels in the absence of reduction maintenance by mild fires. A dissenting report from the Greens member of the panel relied on a submission from a Wollongong University academic Professor Robert Whelan, who claimed that “broad scale hazard reduction is threatening biodiversity conservation and must therefore be avoided by land managers and resisted at a political level”.

Bureaucracies in the south-east boycotted that parliamentary inquiry and, in 2004, they set up a COAG Inquiry headed by Emergency Chief Stuart Ellis, with the eminent Professor Whelan and Professor of Forestry Peter Kanowski from the ANU’s Fenner School of Environment & Society also onboard. Rather than supporting action to reduce dangerous fuel loads, these experts decided that re-education was key, with the emphasis on “learning to live with bushfire”. Since then, more than 200 people have died because policy has focused on emergency response and evacuation instead of sustainable land management.

Whelan received government funding to set up the Centre for Environmental Risk Management of Bushfires in 2006 and head-hunted Professor Ross Bradstock, from NSW’s environmental bureaucracy, to take the lead. By the time Bradstock retired as “an international doyen of fire ecology” he had supervised 22 PhD students and attracted $20 million in research funding.

In 2017, NSW gave Bradstock $4 million to set up the Bushfire Research Hub and, following the Black Summer, he gave advice to the NSW Inquiry. After that, he was succeeded by Dr. Owen Price. The Hub’s publicity about their Eureka crown informs us that Price “pioneered empirical research on the effectiveness of prescribed burning”. Indeed, he was the lead author, and Bradstock a co-author with three other academics, of a paper on this very subject, “Biogeographical variation in the potential effectiveness of prescribed fire in south-eastern Australia“.

This paper attempts to explain away 60 years of real-world empirical data by preferencing computer models. Foresters in Western Australia have a proven track record of preventing firestorms and megafires by mild burning. The academics say that prescribed burning doesn’t work in most of southeastern Australia because the bush is “different”. This is what they mean by “biogeographical variation”.

Anyone who has any real experience in fire management appreciates the benefits of clean, open country to fire-control operations. Those who live and work in the bush know that healthy and safe landscapes can only be maintained by people. The empirical data clearly show that a minimum of 8 per cent of the landscape must be treated each year to prevent firestorms and megafires developing in extreme conditions. The benefits persist for six years. So, unless at least half the bush is properly cared for it will explode in bad seasons, whether ignited by lightning, arson or accident. Contrary to what the academics and their modelling say, the empirical data prove that this is when the positive benefits of burning accrue.

This ‘biogeographical’ modelling did not incorporate any data which could be used to test the effectiveness of burning. There wasn’t enough prescribed burning done to have any chance of preventing megafires in any of the 30 ‘bioregions’ of southeastern Australia over 34 years. That’s why we had Victoria’s Black Saturday in 2009 and , a decade later, the Black Summer of 2019-’20. These disasters will keep happening while governments persist in taking their advice from professors rather than experienced, hands-on professionals.

The academics compared areas subsequently burnt by wildfire against areas previously burnt by wildfires or mild burning. They didn’t distinguish between them, even though high-intensity fires trigger the subsequent rapid accumulation of dangerous scrubby fuels. In any case, the highest average annual percent burnt by all fires in any region was 3 per cent. So we can safely conclude that the average level of treatment by mild fire in Southeastern Australia is less than one  per cent of the landscape.

Our ‘lock it up and let it burn’ conservation paradigm causes megafires, death and destruction and massive greenhouse emissions. Those megafire emissions aren’t brought to account because it is the academics who control the accounting. They say that megafires are natural. They claim that prophylactic burning doesn’t work and, paradoxically, cite their own expertise in telling us how, where and when to burn miniscule patches around suburbia to supposedly protect us from megafires.

In extreme conditions, firebreaks can’t work, whether they’re created by burning or clearing or water-bombing. That’s one reason why, if sanity is to prevail, we need to manage the whole landscape. The other reason is for forest health and biodiversity. As a general rule of thumb, eucalypt forests need mild fire at intervals of six years or less to maintain biodiversity, natural nutrient cycles, healthy soils and healthy roots. Without constant maintenance, scrub and/or rank herbage and/or deep accumulation of dead twigs and bark and leaves chokes out diversity. Forests lose resilience.  It is illegal in NSW to burn forests frequently and gently enough to maintain their health and safety.

Aboriginal traditions recognise that fuel is unnatural mulch producing damp soils and sick trees with lazy roots [as well as] upside-down country – thin on top and thick underneath. Caring for country means not allowing fuel/mulch to accumulate. The modern concept of ‘fuel reduction burning’ is a de-facto admission of bad management. Traditional burning expert, Victor Steffensen says we only need one type of fire – “the right fire” – to maintain healthy and safe landscapes.

Academics talk of ‘hazard reduction burning’ as distinct from ‘ecological burning’ when they are the same thing. They even speak of mechanical fuel reduction. They write papers about the evolutionary fire adaptation of eucalypts, yet they don’t understand that Aborigines created new ecosystems which depend on human maintenance. After he retired from the Bushfires Hub, Bradstock was made an honorary professor. Earlier on, our “doyen” published a paper arguing that megafires are natural and that consequent soil erosion can promote biodiversity rather than extinction! He reckoned that there are too many megafires because humans are “the source of greenhouse gas emissions and many ignitions”. Bradstock’s Bushfire Research Hub have got it upside-down and back to front. There are far too few ignitions by humans, who haven’t learnt to make friends with fire. Massive erosion, pollution, siltation, loss of biodiversity and greenhouse emissions are the consequences.

Prime Minister Scott Morrison won the so-called Climate Election. He promised not to ruin our economy by tilting at windmills. But under his ‘leadership’ the Bushfires Royal Commission turned into the ‘climate crisis’ cop-out. That panel comprised a Defence Chief, a university chancellor and a professor who is billed as a “pre-eminent expert on climate policy”. One doesn’t need to be corroded by cynicism to suspect such a group was predisposed  to support funding for huge firefighting armies and airforces of water bombers. Ironically, they welcomed advice from the same academics and fire chiefs who collectively created the conditions for our Black Summer ‘natural’ disaster. The Royal Commission was directed to have regard for the findings of previous inquiries. But they endorsed the COAG report and failed to consider the critically important findings, based on real knowledge and experience, as in the earlier Nairn parliamentary inquiry.

I referred to both inquiries in my submission to the Royal Commission. The names of the key players – Nairn, Ellis, Whelan, Kanowski and Bradstock – were redacted even though they’re well and truly on the public record along with their advice or findings. The Commission apparently did not take evidence from the highly respected and experienced land and fire managers who informed the Nairn Inquiry.

If Archimedes were around today, his understanding of the scientific principle of displacement might be the only thing stopping him from an attempt to drown himself in the bath.

Vic Jurskis is a veteran forester and author of  The Great Koala Scam, which can be ordered here

A Tale of Two Disciplines