Cool the Planet or We Kill the Dog 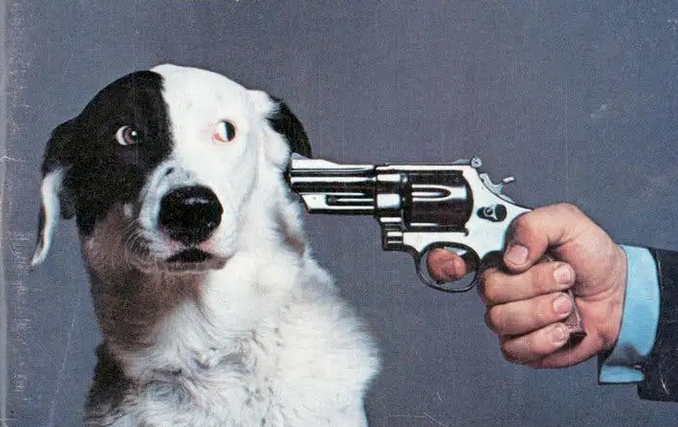 My spaniel, Natasha, has outworn her welcome at our house. According to apex climate scientists doing their peer-reviewed work at universities, dogs and cats are harming the planet with their substantial carbon footprints (make that pawprints). I should replace Natasha, they say, with more climate-friendly pets like galahs, edible hens and rabbits, hamsters, and tortoises. If anyone’s got cause for climate grief, it’s Natasha.

They calculate that Natasha’s emissions stem largely from growing the meat in her pet food. There’s  also  the plastic poop bags that I sneak into other people’s red bins during her walks. Her CO2 emissions are about 30kg a year. That’s not counting her direct emissions while we’re trying to watch Kate Winslet slumming it in Mare of Easttown.

The tipping point to ditch the bitch and cull the kitten could be as early as 2023, a mere two years hence. That’s according to Harvard Professor Naomi Oreskes, a doyenne of the catastrophist community. No-one can doubt her credentials. Wiki lists her latest award as the Medal of the British Academy (2019) amid 27 climate honors, such as “Ambassador and Fellow, American Geophysical Union” and “Francis Bacon Award in the History and Philosophy of Science and Technology, Caltech”.

In 2010 she wrote the solemn book Merchants of Doubt: How a Handful of Scientists Obscured the Truth on Issues from Tobacco Smoke to Global Warming. She’s followed up with an even scarier tract, The Collapse of Western Civilisation. In this book she says global warming will “wipe out” every Australian man, woman and child. Only a few scattered communities — some mountain people in South America, for instance — will survive the killer heating.

More importantly, she prophesises the agonising climate deaths of those puppies and kittens. One reader, she says,

started crying when the pets die, so I didn’t mean to upset people too much … I was just trying to come up with something that I thought people wouldn’t forget about, and I thought, well, Americans spend billions of dollars every year taking care of their pets, and I thought if people’s dogs started dying, maybe then they would sit up and take notice.

I looked up that bit in her book, and found the Kitten and Puppy Mass Extinction occurs in 2023, along with the climate deaths of 500,000 people and $US500 billion financial damage. Oreskes writes, in bold type no less:

The loss of pet cats and dogs garnered particular attention among wealthy Westerners, but what was anomalous in 2023 soon became the new normal. A shadow of ignorance and denial had fallen over people who considered themselves children of the Enlightenment.

She was interviewed by the ABC’s science guru Robyn Williams AO AM, a Fellow of the Australian Academy of Science and also showered with awards and three honorary doctorates.[1] He enthused with her:

Yes, not only because it’s an animal but it’s local. You see, one criticism of the scientists is they’re always talking about global things … And so if you are looking at your village, your animals, your fields, your park, your kids, and the scientists are talking about a small world that you know, then it makes a greater impact, doesn’t it.

Well, exactly. It was about bringing it literally home, literally into your home, your family, your pet, the dog or cat that you love who is your faithful and trusted companion.

Well, it’s all based on solid science. Everything in this book is based on the scientific projections from the Intergovernmental Panel on Climate Change. All we did was to add to the social and human aspects to it.

Back in the real world, the ABC introduced the Oreskes episode on its Science Show with a typical lie: “The Earth’s climate is changing at the highest of predicted rates.” Fact: The past 40 years’ warming to date is barely half of what the orthodox modelling predicted.[2] 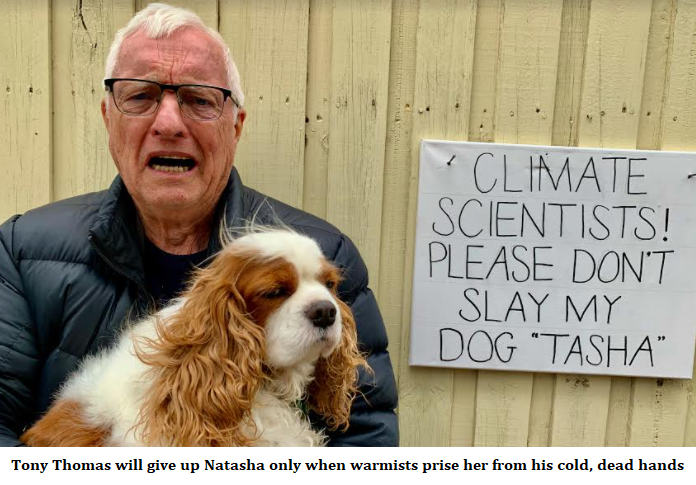 This ABC wallow was all a while back, but there’s now a veritable industry of scholarship damning our pets’ CO2 emissions. Tax-funded full-time climate scientists have assessed the climate impact of St Bernards vs labradors vs Jack Russells. But two studies on dogs’ climate footprints are at loggerheads – one from Australian researchers, the other from Arizona. As a patriot, I support the Australian results showing the CO2 emissions as St Bernard, 90kg; Labrador, 60kg and Jack Russell 20kg. The Arizonans plumped for 20-30 times higher emissions: this is not yet settled science.

The assault on our four-legged friends hit Code Red last month, with Vox magazine USA headlining, “Are our pets gobbling up the planet?” It’s sub-headed, ominously: “Pet care is unarguably bad for the environment. What can we do about it?”

The piece, copiously illustrated, noted that during COVID lockdowns lots of households acquired new pets, aggravating the global heating emergency. It quoted Gregory Okin, a geography professor at the University of California, Los Angeles: “Reducing the rate of dog and cat ownership, perhaps in favor of other pets that offer similar health and emotional benefits, would considerably reduce these impacts.”

Professors Robert and Brenda Vale wrote a book, Time to Eat the Dog? Responding to a public outcry, Robert said, “We need to know what we’re doing when it comes to the environment. We can’t go blind into this debate. Nothing should be off limits no matter how uncomfortable it is to discuss it.” Their book title was deliberately provocative: don’t expect breast of kelpie from Coles. They didn’t want pups and kittens culled, let alone eaten, but they’d have no problem with tinned rats for cats, or dog-owners switching to pet rabbits and boiling the bunnies’ offspring for lunch. The smaller the pet, they say, the better for the planet. I think it was Woody Allen who claimed his parents gave him ants for pets. If bikie gangs had any climate conscience, they’d use chihuahaus and Pomeranians to guard their clubhouses instead of mastiffs and Rhodesian Ridgebacks.

The 160-odd million pets in the US create 64 million tonnes of greenhouse emissions, equal to 13 million cars, says one of those sciency papers in PLOS ONE, which boasts “rigorous peer review”.

Moreover, humans and their pets are getting obese at similar rates. People replicate their food fads with pet foods, with about a year’s lag. Thus we get “No Carb” and Paleo Diet pet foods. Fido’s tin of lamb hotpot may now include rice, pearly barley, broccoli, spinach, blueberries, flaxseed, marigold petals, burdock root and alfalfa. That certainly sounds better on a label than cheaper pet food’s “hydrolysed feathers”, horse, Skippy and “animal derivatives” like hair, teeth and bowels.

Some climate scientists have flogged the reverse narrative that pets are victims rather than culprits of the global heating emergency. They scare the punters with tales that warming will worsen pets’ ticks, fleas and heartworms.

The climate scientists now want legal limits on the type and number of our pets. Although I am older than 17 and not as learned as Greta Thunberg, I still intend to mobilise schoolchildren the world over (except China) for a School Strike for Labradoodles. We march on Federal Parliament next week with our Staffies, groodles, spoodles and cavoodles, and your Siamese, Persians, Abyssinians, Maine Coons and Ragdolls. Cavalier King Charleses, united, will never be defeated.[5]

Further Reading: 7 signs you love your pet more than your partner. For example: You return from grocery shopping with a basket of treats for your dog and forget the one thing your partner asked for.

Tony Thomas’s next book from Connor Court, Foot Soldier in the Culture Wars, will be launched at il Gamberos, 166 Lygon St, Carlton Vic on Wednesday June 16 at 6pm. All welcome, contact tthomas061@gmail.com.

[1] His partner, Jonica Newby, is both an ABC veteran and a veteran veterinarian. Last March she published Beyond Climate Grief. It’s about “How do we find courage when climate change overwhelms us emotionally?”

[2] I forced the ABC to add the following to its iview page:

[Editor’s note: The original introduction stated that “Earth’s climate is changing at the highest of predicted rates, scientists have given up on the much talked about two degree ceiling …” In context these words telegraphed the premise on which Prof Oreskes’ work of fiction is based; however, it has been interpreted as a statement of incontrovertible fact and has therefore been removed to prevent any further misunderstanding.]

[3] The ecological footprint means the amount of land needed to support the pet.

16 thoughts on “Cool the Planet or We Kill the Dog”

No More Tolerating ‘Nonsense’? Prove it

Major changes in views on the environment