Villagers in Taiji in Japan are halfway through their annual dolphin harvest, which runs from September to May. Villagers in Australia are halfway through their annual feeding frenzy of self-righteous indignation. Twitter accounts gurgle with rage. Facebook pages quiver with fury. Post after post proclaims the Japanese to be vile, murderous, and deserving of the same fate as the dolphins.

There are clear emotional benefits to participating slacktivists. A scrumptious sense of moral superiority. The feeling of purpose that flows from with aligning oneself with a righteous cause. Being part of a community of like-minded believers.

But the hunt continues. The Japanese are disinclined to change their behaviour on the basis of what they see as the petulant posturing of a group of ignorant, hypocritical, glory seekers.

The number of dolphins captured each year in Japanese waters is governed by a quota system. Observers keep a lookout for endangered species, which are separated and released. Those species captured at Taiji are not remotely endangered: Bottlenose Dolphins, Striped Dolphins and Risso’s Dolphins. All these species are widely dispersed around the world, with large populations in tropical and temperate waters.

Some studies suggest that the regular cull, although small in comparison with overall populations, helps endangered cetacean species by reducing pressure on food stocks. The Taiji dolphin harvest does no harm to endangered whale or dolphin species, and may benefit them.

But gruesome photos and videos abound. Dolphins being chopped apart. Dolphins having their innards removed. Water bright with blood. They are killed, we are told, by being speared, or having their throats cut, or in the process of being disembowelled.

Readers may recognise the similarity between these allegations and claims made by green-rights organisations about the Canadian seal hunt or the culling of kangaroos. The first stage of attack claims the animals are endangered. When this is shown not to be the case, publicity shifts to the hunt’s alleged cruelty. 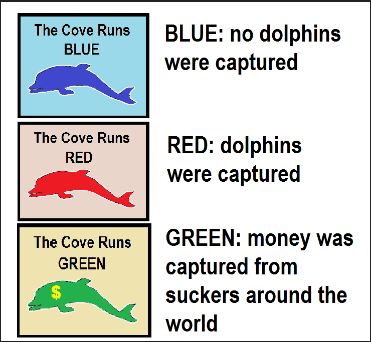 This is usually the point at which celebrity comment is sought. Paul McCartney on kangaroo hunting, for example: "Without reservation I support the Australian groups fighting to save the kangaroo. The killing is a disgrace — cruel and entirely profit-motivated." The same could be said of his song-writing. Brigitte Bardot also had something to say: "The destruction of these totally inoffensive animals is revolting and unjust."

In both Canada and Australia films were produced depicting the horrifying cruelty supposedly routinely inflicted on seals and kangaroos. The film Goodbye Joey was widely shown in Australia and overseas under the auspices of Greenpeace. This film did serious damage to markets for kangaroo meat in Europe and North America. The films were grossly inaccurate.

Two hunters who appeared in Goodbye Joey tormenting and mutilating kangaroos pleaded guilty to charges of gross cruelty. They claimed neither they nor any other hunters they knew of acted this way during a normal hunt, and that they had been paid to torture the animals by a group of film makers. In the same way, hunters charged with cruelty after being filmed skinning a seal alive claimed in court in Canada that they had been paid to do so. Footage edited from the finished film clearly showed the hunters waiting for a signal from the film crew.

Animal activists’ claims of seals or kangaroos being skinned or disembowelled  never made any sense. Why would anyone try to skin an animal that was bleeding, squealing, struggling and trying to bite? Such allegations were false when they were made about kangaroos and seals. They are false when made about dolphins.

The Taiji hunt is no more cruel than herding a group of sheep into a pen at any abattoir in Australia. Like sheep in a pen, dolphins appear to suffer some confusion as they are herded into the shallower waters of the cove. Most often they are kept in holding areas overnight to allow them to calm down. They are then separated and killed one at a time.  Spearing, clubbing, or throat-cutting of dolphins is against the law in Japan. Dolphins are killed with a single bolt to the back of the head, which instantly renders them unconscious and kills within a few seconds.

This humane slaughter may be contrasted with killing of approximately 1,000 dugong per year by indigenous groups in Northern Australia. Not only is the number of dugong killed universally regarded as unsustainable, but they are frequently killed by multiple spearing, or by being dragged ashore and clubbed to death. Green groups seem uninterested in these brutal killings of an endangered species, because in the hoodoo hierarchy that constitutes green/left morality, animal welfare bows to indigenous rights.

The only remaining argument available to dolphin activists is that whales and dolphins are highly intelligent and self-aware, and should be recognised as persons and granted similar rights. Some of the arguments used to justify this claim are so far liberated from any known reality that they are almost heroic.

Whales and dolphins, we are told, are our sea siblings. They are intelligent, sensitive, deeply spiritual beings with complex inner lives. How do we know? Well, they use sound to communicate (so do crickets). They are highly social (so are chickens). They are sexually active and enjoy physical contact (so do mice). They form life-long family bonds (so do turkeys). They are playful (so are lambs).

This reading of intelligence and emotional complexity into normal animal behaviours extends to photographs. An image circulating on Facebook shows two dolphins close together in the water. 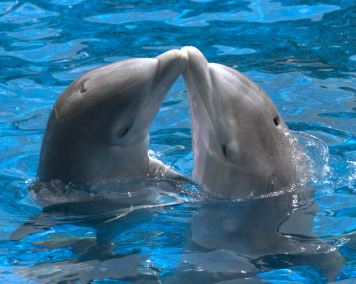 There is nothing in the image to show where the photo was taken, or what the dolphins are doing. But we are earnestly informed that they are life-long friends who have been herded into Taiji cove and are consoling each other in the moments before their death.

The campaign against the dolphin harvest has recently morphed into a campaign to undermine the Japanese bid to host the Olympic Games in 2020. A Facebook page devoted to this cause claims Japan does not deserve to host the games while it condones such brutality. India waged no such campaign against Australia’s bid to host the 2000 Games on the basis of our wholesale slaughter of cows, despite that fact that most Indians believe cows are imbued with spiritual power, and that any killing of them is tantamount to murder. Perhaps Indians are just more tolerant of diversity than we are.

Nor did the Japanese campaign against our hosting the Games, despite their horrified distaste at our consumption of kangaroo meat, and our indulgence in the largest commercial wildlife slaughter in the world, some three million kangaroos per year. Kangaroos, after all, are our national fauna symbol. Also, they are cute and furry.

Cute and furry is not a very good argument, but it is a better argument than the cultural bigotry of the social media campaign against Japan.

A Billion Reasons to Despair