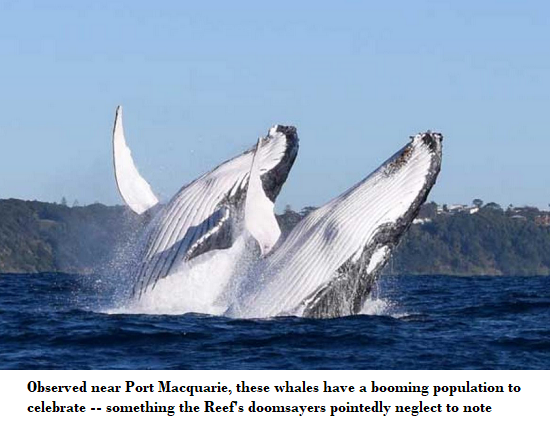 Preliminary figures for this year’s single-day count at Tacking Point, just south of Port Macquarie, show that some 433 whales passed by on their way to the Great Barrier Reef. This compares with the appalling figure of just 19 whales for the full daylight hours of the first count way back in 1999. It is also a sizeable lift from the census of just two years earlier, when 332 whales were counted.

This year’s count further bolsters the case of  those who doubt the notion that the marine environment, here and around the world, is in a state of collapse and that the Great Barrier Reef in particular is on its last legs. Due to the fact that the ocean at Tacking Point is fed by the south-flowing Eastern Australian Current from the Reef, the marine environment of both the Reef and Tacking Point are linked. The same whales that swim past Tacking Point are heading north to meet, socialize and breed in the Great Barrier Reef.

The Doomed Reef scenario is very nearly undisputed by mainstream media, the persistent theme dutifully taken down by reporters-cum-stenographers is that the Reef is so damaged by the twin impacts of cyclone damage and coral bleaching that only further grants to university ‘experts’ (other than Peter Ridd, of course) can save it. The more dramatic re-telling of the long-prevailing nostrum holds that we are living in the Reef’s last days and had better get up there as soon as possible, with our children in tow, to see it before it dies and vanishes completely.

Is the health of the creatures that visit the Reef – including whales – showing signs that either the Ocean is unhealthy or that the Reef is so fragile it will die? The count at Tacking Point not only fails to confirm the Reef’s imminent mortality, it is strong evidence to the contrary.

Tacking Point is a headland which juts just far enough to create a rounding point which brings migrating whales come close to shore. Simply put, it is the shortest route north along this part of the coast and this causes a funnelling effect making it a great vantage point from which to count whales. This may not guarantee that every last whale in the migration will be counted but a huge percentage of them on any given year should come within view.

Sure, there may be some contrary cetaceans which persist in taking a route beyond the horizon and simply do not get counted. There might be whales that get missed by observers because of  sea conditions or, far less likely, are counted twice. There may also be frustration that the daily movement of whales may be a little whimsical, with higher-than-usual or a lower-than-usual numbers passing by on days other than that designated for the official count. For example, three days prior to the official count this year, the number of whales that transited Tacking Point was over 600. So the single-day count, taken year by year, must be assumed to be trend indicator. But, even given generous error bars, the undeniable fact is that there has been sustained population growth since the single-day census began in 1999.

I can vouch for the rigor with which the count was done because I attended Tacking Point Lighthouse on the day of the count this year (2020). It was an exciting day because, even by 10am, there had been more than 120 whales counted. The event was well organised, with someone in charge, a specific arc of sea in which to count, counting assistants, various spotters, a tally room and a team of observers equipped with binoculars as well as finely marked graticules, marking angles left and right, up and down. Using this type of equipment it was virtually impossible for two observers at the lighthouse to see the same pod of whales and count 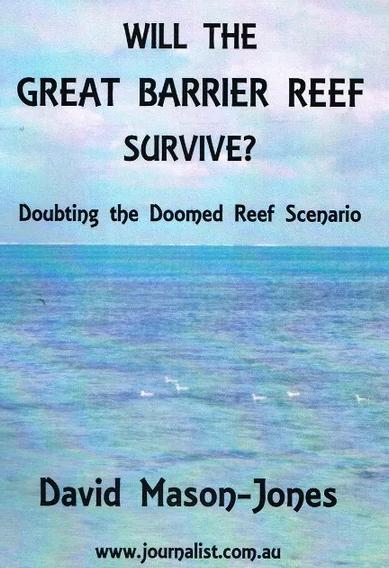 them twice. The person in charge was also in radio communication with two motor boats at the northern extremity of the search arc and these could be used to confirm points of detail such as the numbers in a pod. The Tacking Point census is conducted on the same day every year, the 26th weekend of the year. This year, 2020, the day for the count was Sunday, June 28, just a few days after the winter solstice.

When this year’s count of 443 is compared with the figure of just 19 whales in 1999, it shows that the whale migration is on a sustained growth trend of around 11 per cent per annum. For a whale population, that sort of expansion is not just a ‘make-do’ or mediocre number, it demonstrates an abundant rebound. The point I make here is that nature has the ability to rebound abundantly when times are right. Whales on the east coast are certainly an example of this.

As a digression, let me outline why the whale population declined, and it wasn’t because the sea grew hotter, or due to some other change in the environment. No, it declined because it faced another species — ours — firepower.

For centuries, seagoing cultures had chased whales, these hunts eventually being conducted on an industrial scale. In the days of sail and later, whalers roamed the oceans and harvested them relentlessly. In the decades before whaling was eventually controlled, this firepower extended to harpoons with explosive heads, fast vessels that could easily outpace their targets and move rapidly from pod to pod, and even to airborne spotters to locate the herds.

The part played by a favourable climate and marine environment has been critical in the whale population’s recovery. Were the marine environment adverse — a toxic soup of agricultural runoff, silt and general pollutants stewing in an “unprecedented” temperature spike, as alarmists would us believe — the growth in whale numbers would have stalled. So, does an increase of the magnitude recorded at Tacking Point over the years represent an abundant resurgence? The answer is yes, and the logic works like this: First, the gender balance between males and females is around fifty/fifty, as you might expect. Second, the gestation time for a female humpback  is around ten months. Third, females only rarely produce twins and, when they do, the chances that both will survive is poor. Fourth, whales are mammals and, like us, suckle their young , typically for about 12 months. Finally, the females do not make themselves available for breeding again until the most recent calf is ‘off their hands’. As a result, the full cycle between calves for each female is between two and four years, so let’s assume three on average.

Now consider as an example a herd of 100 humpback whales and then do some quick calculations. Let’s assume that five of the females are too young and five are too old. This leaves a potential group of 40 females which may be available to reproduce but, as the full cycle for each female between successive calves is around three years, it is not possible for all of them to give birth in each and every year. They can only do it once every three years. This means that, roughly speaking, the maximum yearly reproduction rate is 40 divided by three – which comes to 13.

So, if a Humpback population of 100 produced 13 calves each year – a 13 per cent growth rate – this would reasonably be seen as abundant for that species because it is tracking at the maximum potential rate. The percentage shortfall between the theoretical maximum and the actual count at Tracking Point may be accounted for by the level of predation humpbacks and their young face in the Southern Ocean and on their migration route. The 11 per cent annual growth rate is therefore at, or close to, the maximum potential. For humpback whales, the growth rates being achieved along the east and west coasts are great examples of abundant rebound.

The fact that the population of migrating whales is increasing at any point in the migration circuit vouches for the proposition that the health of the entire ocean along the full route must be healthy. If that were not the case, it would be impossible for the numbers to be growing abundantly.

The growth of whale numbers at Tacking Point also serves as a proxy for the resilience and survivability of another tiny life form – the plankton and krill in the Southern Ocean, where whales ‘graze’ in the summer months of the Southern Hemisphere. These tiny life forms in the cold waters of the Southern Ocean are as small as the coral polyps and zooxanthellae of the Reef’s warm waters, and they must be available abundantly each year to sustain the population. If the whale population is expanding – and it is – then the annual plankton and krill population explosion must also be strong. So, on this basis, the whale count at Tacking Point is also a valid proxy for the abundance of the whales’ food source. Again, the alarmists never tell us about that.

The sustained increase in whales heading for tropical waters is good news from the sea and is a proxy by which some of the predictions of Reef doom can be tested. Together with a number of other indicators of marine health, the rebound in whale numbers argues strongly for the proposition that, far from being some sort of toxic soup, the waters of the Pacific Ocean and the marine environment of the Great Barrier Reef are healthy and a great place to take your kids, especially if you’re a whale.

3 thoughts on “More Than a Fluke Driving Whales’ Resurgence”

Four Warmists and a Blonde