My Simple Plan to End the MDB Disaster 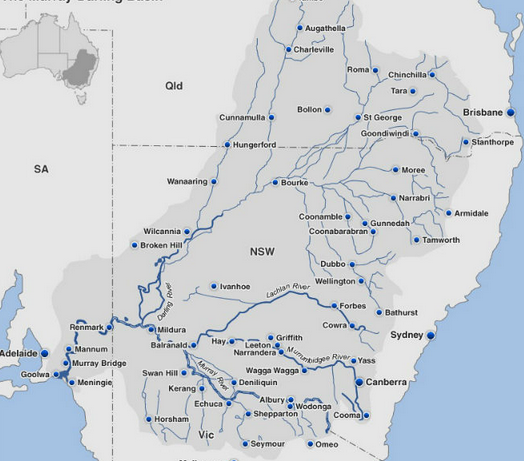 Dear Prime Minister,
I write to bring to your attention what has become an intolerable situation regarding the access to water for the people of Australia. I believe, as do at least two million other hard-working Australians who live in the Murray-Darling Basin, that present water policy is the biggest mistake ever made by the federal government.

Rather than the MDB Plan doing what is so loudly trumpeted by the Authority, the present plan has destroyed aquatic habitat andf returned to dust previously pristine breeding grounds. It has left our dams empty, our rivers dry, fish dead and the people along these rivers without water. The greatest sin of this failed policy is that we now have our stored water owned by speculators, profiteers and green bureaucrats. This is an intolerable situation and one that is very severely undermining the credibility of your government.  You need to be aware that there are in the pipeline very large damages claims against the MDB Authority from those who have seen businesses built over several generations ruined by what this plan has done.

However, there is a way for the Government to regain credibility, stem the massive waste of money and see money again flowing into government coffers from again-productive regional communities.

A Basin plan that works for all

The incursion of the federal government into the states’ constitutional right to the management of rivers and their water was the result of sensationalist and mostly false claims made during the Millennium Drought. Emotion and sophistry replaced truth and reason, as it was claimed our rivers were dying due to extraction by irrigators; further, lack of flow in the Murray was said to be the cause of hyper salinity in the Coorong. Claims of dying river red gums, drying wetlands and species loss were repeated with graphic but mostly misleading detail. The result is a plan costing governments both revenue and credibility as regional communities across the whole MDB regress.

The businesses that grow, process and transport our food and fibre are being destroyed by the removal of the vital input of water and the government-inspired racket called the water market.  Incredibly, the plan is badly impacting the environment it is supposed to be assisting, with genuine environmental issues not being addressed. Empty dams, dry rivers, communities without drinking water and dead aquatic fauna are the result.

The plan detailed below acknowledges and highlights the environmental problems in the MDB that need to be corrected. Practical implementation will not only provide superior environmental outcomes, it will result in healthier waterways and more productive regional communities. It will restore both the Coorong and Lower Lakes to healthy estuarine habitat for more desirable aquatic species. It will be the basis of an expanded fishing industry while maintaining recreational facilities. It will guarantee, for the first time, all water users in South Australia an abundant supply of fresh water at competitive prices. This plan provides for all the increasing water needs across the whole Basin and, for the first time in decades, all citizens of our great food bowl can be confident of a productive future. It will provide water for increased irrigated crop production in the Basin states and guarantee more fresh water for South Australia.

The Coorong: The declining health of the Coorong is widely documented and has been a recurring feature since the drought of 1860, when most aquatic life died. It is a problem that has nothing to do with the flow, or lack of flow, in the Murray. However, it is a problem that is worth permanently correcting and is easy to do so. Redirection of feeder creeks into the southern lagoon, coupled with high-tide ocean inflow would be a permanent cure for the Coorong’s ills. Large pipes under the sand dunes in several places would allow large volumes of sea water to flow into the Coorong between mid and high tide. Free swinging flaps on the outlet would automatically close as the tide dropped. Gravity would propel this water towards the so-called Murray mouth, flushing hyper salinity out to sea. This would ensure that when creek inflow was negligible in drought times, the incursion of sea water would maintain a healthy Coorong.

Lake Albert: There is rightly concern about increasing salinity in Lake Albert, aggravated by its very shallow depth. No amount of extra flow from the Murray River will correct this problem. But it can be permanently overcome in a similar manner, with one large pipe from the sea. The high-tide inflow would flush through Lake Albert into Lake Alexandrina and out to sea, combining with the Coorong flow to increase outflow to the ocean, maintaining a healthy channel without dredging and, more important, without wasting large volumes of productive water as the present Plan does.

The Lower Lakes: This previous estuarine environment was changed to a freshwater regime by the building of barrages 75 years ago. While this was done for the then-worthy reason of providing fresh water for both municipal and agricultural use, it is now causing unacceptable harm to the whole Basin and all water users. It is the barrages that are the ongoing cause of lack of flow through the so-called Murray mouth. The ineffective use of vast quantities of fresh water to correct this problem is the biggest mistake and greatest waste of water by the present Plan. CSIRO research indicates evaporation rates from the Lower Lakes are in the order of 1,171 to 1,445 mm per annum. That is an annual amount of around 1,000,000 megalitres. Therefore, according to my calculations, the maintenance of this freshwater domain is costing Basin communities over two billion dollars of economic activity just from evaporation.

The most flagrant untruth justifying the present plan was the claim that the building of dams and the development of irrigated agriculture has resulted in less flooding. That is, fewer river-flow events that put water over the riverbank and, as a result, fill the numerous billabongs and low-lying areas with water, triggering an aquatic species breeding event. Flood records of the Goulborn, Murray, Murrumbidgee and Lachlan rivers over 150 years prove this to be false. We have had more over-the-bank events since we built the dams than were recorded before. The reason is very simple and while rainfall records show a slight increase over MDB catchments, it is the development of irrigated cropping and, as a result, increased population and municipal development that has increased run-off into all of our streams.

1. Recognition that most of the claims made to justify the federal government’s involvement in water and river management, manifested in the MDB Plan, were false and in fact unconstitutional.

2. Appreciation that management of the water resources of the MDB over decades prior to the introduction of the plan were in the best interests of the nation, mankind and were beneficial, not prejudicial, to the environment.

3. Acceptance that we cannot keep growing our population and economy without building more dams to store available water in times of plenty. Man has yet to develop a better way of providing for future water needs than dam building.

4. That releasing water above that which is required to maintain all of stream flow and extraction requirements has no environmental return. It is the flagrantly wasting of a resource we can productively use elsewhere.

5. Water is our most abundant renewable resource and there are numerous sites to build further storage on most of our rivers and creeks. These storages all become pristine habitat for aquatic species and recreational facilities for mankind.

6. There are environmental problems in the MDB which do need attention, and these are:

(a) Eradication of European carp.

(b) Correction of hyper salinity in the Coorong.

(c) Return of the Lower Lakes to an estuarine environment while maintaining lake water levels.

(d) Providing all-of-stream flow for all major rivers, especially the Darling and its tributaries.

7. The introduction of sustainable diversion limits (SDL’s) was never practical or workable because they are incompatible with the highly variable available water volume.

8. Licenses to use water for irrigation should only be held by entities which control irrigable land. These licenses should only ever be traded to similar entities within the valley in which they were issued.

9. River red gums are flood-tolerant, not flood-dependent, and any artificial watering is also a flagrant waste of a productive resource much more likely to do harm rather than good.

1. Rescind the existing MDB Plan and replace it with a strengthened multi-state agreement which guarantees South Australia its current 1,850,000 ML (except in exceptional circumstances) and increases this guarantee to at least 2,000,000 ML per year.

2. Sell all water licenses presently held by the Commonwealth Environmental Water Holder and speculators to those who have land to irrigate within the MDB.

3. Use the income from these sales to correct the Coorong problems as detailed above and to return the Lower Lakes to an estuarine environment.

4. Set up an infrastructure fund specifically to build income-earning infrastructure such as dams, hydro power plants and transport facilities. Money from the resale of irrigation licenses and money earmarked for the MDB Plan would be the seed capital for the Fund.

5. Immediately commence the building of more water storage facilities across the Basin; specifically assessing these as a priority:

(a) The Lake Coolah- Stony Point off-stream storage in the Murrumbidgee Valley.

(d) Diversion of high flows in the Kiewa River into Hume Dam, or dam on the Kiewa.

(f) Several storages on the Lachlan and its tributaries.

(g) Reassess the Chowilla Dam as a permanent guarantee of SA’s water supply. Practical management of this resource will never be complete until Chowilla is built.

(h) A dam on Billabong Creek.

(i) Numerous other sites have been assessed and could over time be built.

6. Implement research into permanent control of carp. Environmentally, there is no more important objective.

This plan would very quickly return growth to the communities of the MDB and increase employment as a result. Rather than the present arrangements’ ongoing cost to the government, this plan detailed above would increase receipts. It would correct the real environmental problems within the Basin without wasting fresh water, as is happening with the ineffective present and failed plan. Aquatic species and mankind would both have enhanced environments as a result.

Prime Minister, implementation of the practical, commonsense measures I hve outlined would demonstrate that you and your government are acting in the interests of the Australian people. It would halt water wastage and put our most abundant natural resource be of long-lasting benefit to man and the environment we share with other species.

Ron Pike is a water consultant and third-generation irrigation farmer