Lend me your ears, children

First, before a greybeard offers his counsel to the world’s youth, let me start with this, which more or less shows that global warming has stopped dead for the past 15 years and may even be in descent.(see the graph below) 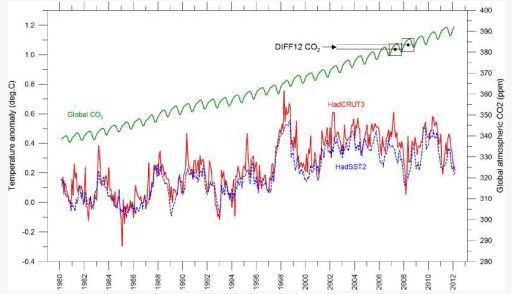 The text Below is from a different article with a different but similar chart, but the result is just the same:

The apparent ‘decoupling’ of global heat from atmospheric CO2 concentrations — with the clear divergence of observed temperatures from projected temperatures — provides mounting evidence for falsification of IPCC climate models.

With the following conclusion reached at the end:

Some observers of climate data are expecting the Earth to pass through at least a 30 year climate cooling period.

If you are young you are generally less knowledgeable. But being “idealistic and impetuous youth”, as they say, you are therefore apparently in need of something to show your independence — even if that something is totally preposterous and impossible to believe upon a close examination of the facts. But if it is useful as a means to show independence, to differentiate yourself from your elders, to show you really care about the world and can do it better, well off you go.

But really, kids, why pick something as damaging to yourselves as a war on cheap sources of power? Continuing along these lines will seriously stunt your own lives as well as doing harm to the rest of us.

The world is not apt to stay as it is, and your futures are not likely to be as rich and rewarding as were the lives of the generation now heading into retirement if, by the policies you support, you ruin our energy-dependent industries and raise costs that reduce our ability to produce. It will also come as quite a surprise when you start paying your own gas and electricity bills. You think you are being self-sacrificing by your willingness to accept lower living standards for a better world with less carbon in the air.

I, on the other hand, think you are ignorant fools — as per the young and gullible idealists in the video clip below — contributing to the problems of the world without solving any, and also that you are likely to regret deeply the choices you have made.

Which brings to mind this letter to the editor published by Barron’s following the American election. It was published under the heading, “A Warm Thank You”, and so it is.

This 50-something, white, conservative Republican wishes to thank America’s youth for sacrificing their financial futures and standard of living so that boomers, such as my wife and I, can look forward to a long and comfy retirement, which we could easily have afforded on our own. Now we have the youth as our guarantors and providers of a little something extra.

As reported by the national exit poll conducted by Edison Research, Americans aged 18 to 29 voted 60% to 36% for Barack Obama. Prior to Obama’s re-election, I believed that it was morally wrong for my generation to pass a crushing national debt on to the next one.

The debt will top $20 trillion before Obama moves out of the White House, and it will include spiraling retirement-related costs that the administration has shown zero interest in bringing under control, largely driven by baby boomers piling into the Social Security and Medicare systems.

With the president’s electoral crushing of Mitt Romney, my overriding sense of morality and guilt have vanished. Thank you, kids!

The sad part about the global-warming, Obama-voting youth of today is that they have shown little appreciation for irony. So young, so naive, but at least there is that one silver lining: We will not have to live most of our lives led by such dumbbells as these.

Steve Kates’ most recent book is Free Market Economics: an Introduction for the General Reader

The Depths of the Climateers’ Deception