Drowning Truth in a Sea of Luvvie Piffle

If you scamper along to the Perth Festival of Arts, you can catch body artist Latai Taumoepeau in a video of herself as a Tongan who’s drowning from the devastating seas of global warming. She dances inside a Perspex tank (pictured below), her movements becoming “more challenging and frenetic” as rising water finally submerges her.

Climate-horror has been her shtick since at least 2007 when, as a delegate, she joined the countless thousands of activists to the Bali season of the IPCC.  She recollects: “It really kind of annoyed me how Australia could not  take responsibility for demise of neighboring countries from climate change and global warming.” Her interlocutor is co-director of Performance Space, Bec Dean:

Dean: “There should be a place for anger…act now, do something about it or f–k off.”

Latai: “Our complacency seems to me like performing water torture  on groups of people who have contributed nothing to climate change.”

In that video Latai identifies as both a first-generation and a third-generation Australian. What’s definite is that she grew up in Marrickville, Sydney, as “a person of color” (ancestry Tongan) afflicted by open and covert racism that gave her a “sense of otherisation”. 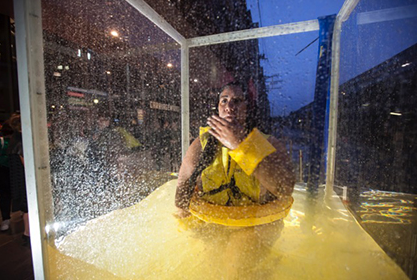 Her actor-musician friend Jay Laga-aia says,  “She definitely is a voice that can’t be silenced.” Silenced? She’s had $27,000 direct from the Australia Council, plus indirect Australia Council help through its funding of events in which she stars. She is also an Australia Council peer assessor with a voice in deciding which of her fellow artists get funding and how much, as she explains in this video clip. When not  pursuing or distributing taxpayer grants, she has taken her show to London. I can’t detect a brutal silencing campaign.

She has another climate-horror dance involving fixing herself painfully to a 500kg block of melting ice (the Antarctic isn’t melting, but never mind). She cries and wails, to the distress of pal Bec Dean.

Another show “Nothing to Lose”, at the Sydney Festival in 2015, wasn’t about climate horrors but a collaboration with six other dancers and “fat activist” Kelli Jean Drinkwater  “exploring the movement and sculptural quality of the larger physical form“. The SMH’s critic noted:

“A delightfully light-hearted sequence where the performers shimmy and shake each and every part of their bodies is contrasted with another during which one performer throws herself repeatedly on the floor – whether in frustration or despair, it is hard to tell.”

Re-done at Melbourne’s Malthouse, the audience was

“encouraged to lift the skin of a belly and to feel its weight as it fell upon release or to trace their hands along the contours of the body until they found a hair. And once at that singular hair to twirl it with their fingertips made for an intimate celebration of ‘the sculptural splendor of the fat dancing body.’”

Well, I have great news for Latai Taumoepeau. Seas are not drowning Pacific islands after all. The most low-lying of them, Tuvalu, continues growing in size, according to a new peer-reviewed paper in Nature Communications by University of Auckland scientists. Using aerial photos and satellite imagery, they found that, from 1971-2014, eight of the nine atolls and nearly three-quarters of the 101 reef islands grew in extent rather than eroded. Tuvalu gained 73 hectares or 2.9%. Of the 101 islands, 73 have grown.

After backside-saving kow-tows to climate orthodoxy, the paper says the Tuvalu islanders should  skip their doomsday caterwauling and hopes for antipodean visas, and instead “start planning for a long-term future”. Co-author Paul Kench  says that since Tuvalu land is expanding, there’s decades for the islanders to work out adaptation plans. “Loss of land is unlikely to be a factor in forcing depopulation of Tuvalu,”  he concludes.

It’s been established for years that  Tuvalu is growing, but this evidence has been ignored both by the Pacific islanders (who have used ‘international compensation’ for global warming as a money machine), and by all the green propaganda groups which use “drowning islands” as persuaders of the ignorant. Indeed my first contribution to Quadrant Online six years ago dealt with an earlier study by the same Auckland Professor Paul Kench, who had used wartime aerial pics to show Tuvalu was growing  and had nothing to worry about for the next 100 years.

That article noted, “Concerning atoll erosion, over-fishing of beaked reef fish and mining of sand, gravel and coral for Western-style house construction are primary causes.  Other ‘bads’ are  denuding of beach vegetation for fuel, asphalting of roads, and urban drift to the main island Funafuti. Waste and waste-water disposal are other serious issues. Above all, having lots of children in a seriously limited habitat is bound to create an environmental mess. The fertility rate in Tuvalu is 3.11 children per woman, compared with Australia, 1.78.”

Tuvalu nonetheless was great for climate activists, a literally tear-jerking issue. At the IPCC’s Copenhagen conference in late 2009, Ian Fry, Tuvalu’s lead negotiator, told delegates, “I woke up this morning crying, and that’s not easy for a grown man to admit, the fate of my country rests in your hands.”

As he said this, his eyes again filled with tears, and mortified delegates applauded him wildly. Later, some nark noticed that he was not from Tuvalu at all, in fact he was a lawyer from Queanbeyan, Canberra’s next-door neighbour. He’s an ex-Greenpeace liaison officer and a specialist in island-nation advocacy.

At the 2015 Paris climate farce, Tuvalu’s Prime Minister Enele Sopoaga said, “Tuvalu’s future at current warming is already bleak. Any further temperature increase will spell the total demise of Tuvalu.” For the sake of Tuvalu (pop 10,000) he wanted the whole world (pop 7.6 billion) to eschew fossil fuels in the phantasmagoric hope of capping warming at 1.5deg.

Climate huckster Al Gore in his Inconvenient Truth movie fictionalised that “the citizens of these Pacific nations have all had to evacuate to New Zealand.” A UK High Court judge Michael Burton, stating the bleeding obvious, said Gore’s claim was false. Gore has never amended his film, which has since been force-fed to millions of Australian schoolchildren. Undaunted by such strictures from the UK Bench (there were eight other errors judicially noted), Melbourne University chancellor Allen Myers AC QC  last July awarded Gore an honorary doctorate – in Laws, would you believe.

Australian taxpayer aid to Tuvalu  for the three years to 2017-18 is $24 million, not bad for an island population of a mere 10,100. DFAT mentions the island’s economic problems and adds, “Climate change impacts will exacerbate these development challenges.” However this “climate change” aid is  nothing  more than normal development, such as augmenting fresh water, food security and cyclone recovery. Apparently bureaucrats have to keep saying “climate change” to please Julie Bishop and Malcolm Turnbull.

Last May a World Bank paper by Prof Stephen Howes from the   Australian National University urged that the Tuvalu and Kiribati (pop 107,000) get open rights to migrate progressively to Australasia in order to save residents from (non-existent) island shrinkage. “The worsening impacts of climate change have provided a new moral imperative for providing open access,” he wrote . Sea levels, he said inexplicably, “have already begun inundating land and homes across the islands.”

So far the number of climate refugee claims from the Pacific amount to 17. The successful ones: zero. This compares with the UN forecasting 50 million globally by 2010.

The Wikipedia page Climate Change in Tuvalu has already updated to include the Auckland land-growth results in its opening  paragraph. I suspect the warmist vigilantes who censor Wikipedia will find a way to smother and erase that good news shortly.

4 thoughts on “Drowning Truth in a Sea of Luvvie Piffle”

The Murray: a fresh perspective