Imagine this scenario: a critically ill child, let’s call him Timmy, needs a very expensive operation that is only available in the USA.  A crowd funding initiative is established to save the life of the unfortunate child.  Alas, despite brave efforts on the part of the promoter, the amount promised falls well short of what is required.  What does the fund manager do?  Does he regretfully return the hard earned money to the donors or does he tell the parents of the child “Well, I’m afraid we just couldn’t raise enough money for the operation but the good news is we can afford to have Timmy’s teeth straightened”.

An unlikely scenario, I admit, but one that is now playing itself out in our government’s feckless emissions-reduction strategy.  I call it passing the hat for Gaia. Below is a copy of a letter I recently sent to Environment Minister Josh Frydenberg, a man whose reputed smarts had many observers seeing a PM in the making. Having received nothing but a few cliche-riddled words of green boilerplate from the minister and his department, I’m inclined to believe his latest priority is political suicide.

Dear Minister,
Last night I watched your TV interview with Rowan Dean.  I noticed, first of all, that you use the term climate change, rather than Catastrophic Anthropogenic Global Warming which was the initial trigger for all the CO2 emissions reduction efforts that today severely constrain our power supply and which, as it happens, has not yet eventuated.

In the interview you stated that, in relation to climate change you are totally guided by the science, which many commentators tell us is settled.

The fundamental metric in global warming is Climate Senstivity, i.e. in simplistic terms, the amount of warming that results from a doubling of atmospheric CO2.  This sensitivity comprises an initial component derived solely from CO2 and an additional warming, or amplification, due to increased water vapour.  The IPCC, in its 5th Assessment Report in 2014, estimates Climate Sensitivity to be in the range of 1.5C to 4.5C.  That doesn’t sound particularly ‘settled’ to me, even less so when you realize that this is the same estimated range that they had at the time of the 1st Report in 1990.  In other words, despite the billions of dollars that have been poured into climate change research in over thirty years, they still can’t say, with any certainty, whether doubling CO2 will have a benign effect (1.5C) or a possibly catastrophic effect (4.5C).   What we can say is that during the period that  CO2 increased from 280ppm to 410ppm now (an increase of nearly 50%) the world has warmed about 1C, much of which would be attributable to post Little Ice Age natural warming.  It is also worth noting that Climate Sensitivity is a logarithmic function, i.e. its effect is the most severe in the early stages.

Be that as it may, what interests me more is the way in which science and economics have been harnessed to produce an Australian CO2 reduction target under the Paris Climate Agreement.

As part of the Paris process, the UN called for national leaders to sign up to a global agreement on reduction in human CO2 emissions that will “limit global warming to 2C degrees (preferably 1.5C) above the pre-industrial level”.   The basis for the agreement was national pledges from individual countries.

My first question is, if we don’t know the value for Climate Sensitivity how can we know what reductions are necessary to achieve any target? How are countries to determine what emission cuts would be necessary and sufficient?

In other words, what official guidance was issued to countries? If such guidance exists it was not widely published.

In the case of Australia, we have the Climate Change Authority (CCA), which, prior to Paris, had issued some guidance.  I would like to know if this was the basis upon which Australia determined its CO2 emissions reduction target.

In 2014, the Authority issued a report, based on a paper by Meinshausen et al (2009) which assigned various probabilities of limiting warming to 2C against various emission scenarios. The report can be read at http://www.climatechangeauthority.gov.au/reviews/targets-and-progress-review-3.

These scenarios are based on total cumulative global CO2e emissions (called global budgets) from 2000 to 2050.  There are four of them equating to various probabilities of limiting warming to 2C.

According to Meinshausen et al, limiting emissions to this budget, would deliver a probability of 67% of not exceeding 2C degrees.

The CCA report says that the pathway to achieving the desired cuts is flexible but the principle is that the overall budget should not be breached. Under business as usual we would emit 22GT by 2050, so we are looking at an overall cut of  more than 50% from current levels by 2050. What is the likelihood that the Australian government will sign up to something like this in December?

But it’s even more problematical when one looks at the global picture.

So already we have consumed 1520GT of our global budget of only 1020GT CO2e. Even if the developed world achieved a 50% cut in emissions, it would still have emitted roughly 430GT by 2050. Against a budget of 1020GT, actual emissions would total 1950GT.

So even if Australia achieved its’ 10GT budget, the world will have overshot the mark by  90%.

It’s possible the Department of the Environment has issued different guidance to the government and, if so, it would be nice to know what it is. The alternative, unthinkable one would hope, is that the Government simply licked its finger and stuck it in the air.

In case I have not made myself clear, what I would like to know is how the Government determined that our agreed emissions reduction target of 26%-28% below 2005 levels by 2030 constitutes a meaningful contribution to the global goal of restricting warming to 2C (preferably 1.5).  And, given that all these CAGW prognostications are based on probabilities, what risk management and cost benefit methodologies are being used to ensure that, as events further unfold, taxpayer funds are being expended in the most efficacious way?

I received the following reply:

Dear Mr O’Brien
Thank you for your letter of 01 June 2018 to the Minister for the Environment and Energy, the Hon Josh Frydenberg MP concerning Australia’s emissions reduction target. The Minister has passed your letter to me for reply.

The Department takes its advice on climate science from the Bureau of Meteorology (BoM) and the Commonwealth Scientific and lndustrial Research Organisation (CSIRO). Specific questions on climate change science should be directed to them.

There is overwhelming scientific evidence the climate is changing due to human caused emissions of greenhouse gases. This advice aligns with information provided by internationally respected science organisations such as the National Aeronautics and Space Administration

(NASA) and the lntergovernmental Panel on Climate Change (IPCC). The Government is committed to meeting Australia’s international commitments under the Paris Agreement, while maintaining energy security and affordability and the competitiveness of our industries. The Government’s target, to reduce emissions by 26 to 28 per cent below 2005 levels by 2030, is considered responsible.  It is among the strongest of the major economies on a per capita and GDP intensity basis. Australia has a record of meeting and beating its emissions reduction targets and is on track to meet its 2030 target.

I had been travelling so, as luck would have it, I read this letter on the same day that Bjorn Lomborg had a devastating piece in the Weekend Australian. What better basis for my response to this drivel?  Here it is:

Dear Minister,
In early June I wrote you a letter seeking some information on the way in which your Government determined how your targetted CO2 emissions reductions under the Paris Agreement contribute to the aim of limiting global warming to 2C and what cost benefit methodology was employed to ensure that taxpayer funds are not wasted.

I received a reply from Acting Assistant Secretary Daniel Sheedy (PDR: MC18-008778) that made no attempt whatsoever to address my questions but simply parroted the ‘sound bites’ that have now become the standard response to any hard questions on this subject.

I am not seeking, here, to debate the validity or otherwise of the theory of Catastrophic Anthropogenic Global Warming which, incidentally, I believe is grossly overstated.  What I am concerned about is the wholesale destruction of Australia’s energy market by policies that appear to be based on no more than guesswork.

I have examined the Department’s fact sheets on our Paris targets and nowhere do they provide any information as to how they, in conjunction with other countries ‘pledges’, will contribute to the stated aim of limiting global warming to 2C. The most that is posited in their justification is that they are ‘reasonable’ in comparison with those of other countries.

I am not alone in my concern.  No less a figure than Professor Bjorn Lomborg, who not long ago enjoyed such confidence from your government that you undertook to subsidize the establishment of his think tank at an Australian university, has last weekend come out in The Australian (www.theaustralian.com.au/news/inquirer/abbott-is-right-paris-climate-treaty-fails-to-fight-global-warming/news-story/c983e326b92e5bd37962e3d7dc3e593b) with a detailed and, it appears to me, unarguable case against the Paris Agreement.

That article, which cites a number of cost benefit studies, is a direct refutation of your Government’s policy and, I noted from the subsequent letters pages, resonated strongly with The Australian’s readers – a demographic that, I would have thought, would be crucial to the survival of your Government.  I was therefore mightily surprised that you had not bothered to respond to Professor Lomborg.

So let me reposition my query.  Have you, in fact, carried out any due diligence in the form of rigorous cost benefit analysis that would refute Professor Lomborg’s proposition?   Or are your emission reduction targets nothing more than just virtue signalling on steroids?

I know you are a busy man but this time I would appreciate your personal, detailed response.

If I get a meaningful response from Frydenberg I will share it.  I’m not holding my breath. 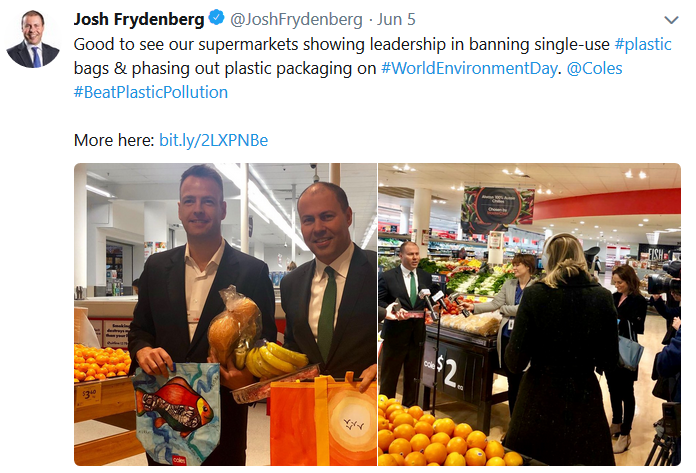 Minister Frydenberg takes time from advocating one bad idea to endorse another.

10 thoughts on “A Low-Energy Minister Bent on Suicide”

When Teacher Is The Dunce