Ever used a dodgy builder? Then thank your lucky stars you’re not a granny cyclone victim in Bangladesh, with people from the government arriving to help. The money to build her a new house is provided by a climate-adaptation fund, but all she gets is a roof and floor but no walls. The structure then begins collapsing within two months.

The Paris climate talks next month are partly about creating a $US100b-a-year climate fund to help the Third World adjust to hypothesized global warming. In a bit of political theatre (we taxpayers bought her tickets), Foreign Affairs Minister Julie Bishop last December pledged $200m to this fund, rhapsodizing about “investment, infrastructure, energy, forestry and emissions reductions.” [i] The Climate Fund is now taking heat for corruption and non-transparency. Newsweek, although a fervently warmist journal, ran a piece to that effect a few days ago.

An inkling of how such money actually gets spent comes from our Bangladesh example. Transparency International Bangladesh audited a $A4.5m project financed by a climate-change trust fund administered by the Bangladeshi  government.  It also tried to audit a sister-fund provided by aid donors, but couldn’t find enough documentation to even start the audit! One of its trenchant recommendations was to “mete out exemplary punishments to corrupt individuals.”

The government-funded plan was to build cyclone-resistant housing at Khulna for an abjectly poor community devastated by Cyclone Aila. The photo shows what was actually built for grandmother Mrs Khadija Begum — a 4metre x 5metre house with no walls.

Asked, “How do you feel about the Cyclone Resilient House?” she replied,

“I don’t know whether it is built for a human being or not. There are only four pillars with roof and there is no sidewall in this house. So I do not know how my family can live in this house”.

The auditors noted she has a granddaughter “and it is depressing for her as she is living in cold, and the house is not suitable for any other seasons like rains, storms and floods.” The “house” is pictured below. 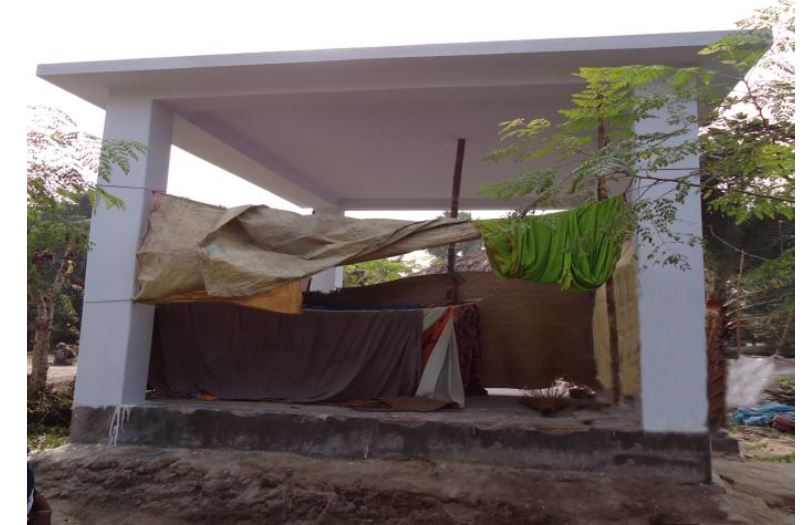 The “house” has no sanitation, water supply or personal hygiene facility. It is  also unsafe for adolescent girls and women because intruders can walk right in. The lack of walls was rationalised by the bureaucracy as follows: If the house had walls, the family would shelter in it instead of going to the community cyclone shelter, where they will be safer. Moreover, tidal surges can now wash straight through the wall-less house instead of being bottled up within the house.  Anyway,  “affected families could build the side walls on their own and thereby contribute towards ownership of the building.”

The auditors said, a little plaintively, “If the houses are not capable of playing their due role during disasters, then what is the justification of building such type of cyclone-resistant houses?”

Mrs Begum was aware that the government budget for each shelter house was US$1400. But the builders substituted cheap materials and ,within two months, the house was collapsing. Worse, it was now taking up some of her little plot, making that land useless. Other locals have begun using it as a cow-shed.

Actually, the budget for the house was supposed to be $US3100 and the original plans included “both roof and walls”. But the government agency cut costs by dispensing with walls. That way it could build more (wall-less) houses and publish fancier statistics in its annual report. There were no feasibility studies, and the funders “had no knowledge” about how to design cyclone-resistant housing. Transparency International notes that the families had already been pauperized by natural disasters and had no spare money for building walls.

Taking a step back, who decided who would get the (useless) houses? Well, a large committee of stakeholders compiled the beneficiary list — but it was then it was re-written by political insiders. One hopes, but cannot be confident, that no baksheesh was passed quietly under the table.

The main contractor let out the work to subbies for quick progress, but the subbies were accountable to no one about their materials, schedules and quality inspection. Unsurprisingly, their workmanship was ‘very poor’ and was followed by disintegration of plaster-work and collapsing roofs and basements. “The houses have now become a burden for their owners,” Transparency International says.

This wasn’t an isolated instance of climate-fund crazy constructions. The next project audited involved a Char-Mynka district dam and land reclamation, with total funding of $A9m.

The auditors found that the project had been chosen in the first place through “political consideration and emphasis on personal choice”. There was no environmental  or social impact statement, nor were there  consultations with locals. This led to blockages of a dozen wide and active water channels. The size of land to be reclaimed was left vague, and a protected forest conveniently disappeared from the project’s maps and blueprints. The project got under way minus the presence of any expert engineer, and because of poorly sited dredging, “the probability of breaking down of the dam is very high in the near future.”

The contractors quickly ran through about $3.5m in spending,  “but there was no significant progress in the project”. Oversight of the money disappeared in the cracks between the local and district authorities.

Mid-way through the project  the Water Board suddenly issued a permit to cut down 30,000 trees at the protected forest, creating a fight with the local forest authority. This fight held the project up so that it got caught by the wet season. The auditors concluded, “The future of the project is uncertain. In this circumstance, question can be raised about the accountability of [the climate fund]  authority in approving such project.”

A third project was Forest Department tree planting on coastal embankments, with a budget of about  $A2m.  Some of the assigned land had been leased away by other officials and used by shrimp farmers; some land was occupied by squatters and other communities; and some land was useless. The forest officials lost interest because they had no funds to actually visit the site.

However awful such projects areon the ground, they are enveloped in glorious clouds of bureaucratic prose. The three cited were among those programmed for

The Bangladesh government injected $US300m into its climate trust, with two-thirds for projects, and the rest “supposed to be used” for emergency response and collaboration with non-government organisations (NGOs). The audit’s wording suggests skepticism, borne out when disbursements to NGOs were stopped because of corrupt selection processes and “huge criticisms and protests by the media”. The number of central government officials – a mere five or six — monitoring 63 projects nationally worth $US150m would fit in  a telephone booth.

The other Bangladesh trust is funded by altruistic Western governments and agencies. This fund saw an outflow of $US125m in spending, but only three projects started, with spending of $US38m. Allegations of “irregularities and possible corruption” caused the government to vary the projection selection methods, creating new allegations of conflicts of interest. Transparency International could find documentation for only one of the projects, while the other two had nothing available for inspection, other than their names and amount of money approved.

The  World Bank, supposed to help with project selection and planning, deducted 4% of the funds for “fiduciary management and operating costs”.  Transparency International asked the World Bank for details about the projects and received no reply, rendering it unable to assess the governance risks.

according to reliable sources, some projects have been approved … for funding without prior justification and applicability of climate change criteria; rather, they were chosen under political considerations.

Meanwhile, Newsweek on November 8 ran a piece by Ben Wolford with a realistic heading about the  Paris-planned $US100b Green Climate Fund. It read, Green Climate Fund Must Fight Corruption Before It Can Beat Global Warming. The fund has garnered only (only??) $US10b so far of its intended $US100b per year, “and has been accused of promoting corruption”, Wolford says.

The 24-member board of the Green Climate Fund (50-50 First and Third worlders)[ii] met on November 2-6 at a swanky resort in Zambia overlooking Victoria Falls. The goal was to start carving up the $US10b among   claimants, such as those politicians in the Maldives who lamented their purportedly drowning nation by infamously conducting an underwater cabinet meeting while furiously building airports and speedboat harbors for tourists. The fund’s board also has been keen to reassure the December talkfest in Paris that funds are already being disbursed. To this end, the confab led to $US168m being poured into eight  project approvals, jumping the gun on secure fiduciary systems. Wolford writes,

So far, leaders of the fund have talked about its commitment to transparency while remaining opaque in practice. The board has weighed major decisions behind closed doors and, in a draft version of its information disclosure policy, even suggested that tape recording certain meetings should not be allowed.

Wolford says the Fund should offer protection to whistleblowers. More than that, he wants it to explain who pays if money is misused or pilfered. As it stands now, as his piece notes, “once the money’s lost, the money’s lost.”

Believe it or not, Wolford says this Fund, lax as it is, still boasts tighter protocols than heaps of other funds for climate adaptation in the Third World, which in total received $US9.4b in 2014, up 50% on 2013. He finishes on a cheerful note:

Clarisse Kehler Siebert, a research fellow at the Stockholm Environment Institute, says that, yes, we ought to be concerned about corruption when it comes to the Global Climate Fund —but not to the point of ‘being paralyzed.’ She adds, ‘Daring to do something good is better than doing nothing at all.’

Also bear in mind that Prime Minister Malcolm Turnbull has decided to go to the Paris talks. Asked if he would “go beyond” Australia’s current commitments, he said: “Sure, arguably. That depends on the rest of the world.” Gee Malcolm, add another zero to our Climate Fund contribution. It would still only be $2b were you to do that, and and the world’s poor clearly need many more wall-less, ramshackle hovels. As Siebert puts it, “It’s better than doing nothing at all”.

[i] The coalition government had previously declined to contribute to the fund, but then-Prime Minister Tony Abbott changed his mind.

[ii] Our own Ewan McDonald, deputy secretary of DFAT, is on the board. Others include reps from corruption-free Congo, Egypt, South Africa, Cuba and Zambia.