Exhibit A for Selling the ABC

THERE are two ways to look at what the ABC put to air on Wednesday’s Lateline. No, make that three, because while it goes without saying that the national broadcaster is forever placing taxpayer-provided airtime and assets at the disposal of its favoured cobbers, Tony Jones’ “interview” with Tim Flannery was extraordinary even by those debased norms. So the first perspective must look to the future: one day we might actually see a Coalition government in Canberra that sets to work on the cronyism, nepotism and institutional corruption underwritten by the one billion-plus dollars a year that is poured into Mark Scott’s no-conservatives-allowed cubby house.

Until that happy day, let the Lateline spectacle of a lunatic fabulist being pleasured by a sycophant serve as a reminder of what the ABC has been allowed to get away with for far too long. Imagine, if you will, how the segment might have played if the interview had been conducted by a journalist, rather than Jones, whose moonlighting as a shill for green ideologues and rent-seekers can only call his motives and objectivity into question. This is the second way to regard the, ahem, interview. 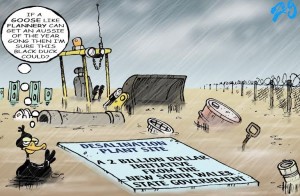 A journalist, but not Jones, might have asked Flannery to explain his unbroken record of dud predictions. He is, remember, the man who prophesied that it would never rain again, that Perth would become the first ‘ghost metropolis’ for want of water and the Arctic would be ice-free by 2013.

A journalist, but not Jones, might have followed up on Quadrant contributor Tony Thomas’ investigations of the Climate Council’s finances, asking Flannery how much he is pocketing and if access to cash had anything to do with his stepping down as a council nob?

A journalist, but not Jones, might have asked Flannery if the ABC walkabout documentaries he does with John Doyle should be advertised for competitive bidding. You know, something like “WANTED: photogenic warmists to go jaunting, object being to illustrate the environmental crises that will kill us all (but not before the favoured few have cashed their ABC cheques).” Yes, such an ad wouldn’t be any less biased than current operating and hiring procedures at the ABC, but at least Flannery’s fellow catastropharians would have a competitive chance to get their own snouts into the trough for a change.

Yes, a journalist might have asked all that and more. But for $355,789 a year, what the ABC gives us is Tony Jones. Here is the transcript of the Flannery segment, which occupied a full 14 minutes or, to put it another way, just a few seconds shy of half the entire programme. What was the need to drag Flannery from the tender embrace of his dirty-book writing new girlfriend, place him once more before the cameras and lavish such adoring exposure? Is the world suffering a sudden deficit of doctrinaire stupidity? Is Jones so exhausted by the need to interrupt conservatives on Q&A that he sought the respite of a guest who could be trusted to say nothing likely to cause a ripple in the Fair Trade coffee queue at the ABC cafeteria? Is it that Flannery epitomizes sustainability, able to repeat the most utter nonsense until the farting cows come home and beyond?

The only possible reason the ABC might have dragged out Flannery is that it had rained rather heavily in and around Sydney.Yet Lateline’s guest begged off diagnosing the downpour as a definite symptom of Gaia’s anthropogenic torment. So he was there why exactly?

Well, this being the ABC, one can guess that some producer thought it would be a good idea to hint that the rains were, you know, related to, shudder, climate change. So they called Flannery, reminded him that he would be among friends and – Presto! – your tax dollars at work. And your remote-control channel-changer, too, if you had any sense other than the acid gush of rising bile.

But did they do the poor man any favours? This is the third way of looking at the Lateline segment and, without a doubt, easily the saddest. Once, long ago, Flannery did have something worth saying. His book, The Future Eaters, makes some very good points about the hand of man and the influence it has exerted on the Australian landscape. It is hard to take up that book now, knowing what a determined spectacle Flannery has made of himself, without being disconcerted by the thought of just how far a once-sharp mind has plunged. The man who has reduced himself to the alarmist from Central Casting makes a sad spectacle, and on Lateline, aided and abetted by Jones, the depths of his by-rote incoherence were painfully obvious.

He was goggle-eyed and blustering, those practiced words of imminent doom tumbling out in ejaculations occasioned by the random triggers of pavlovian psychology. Heavy rain? No, it’s not climate change, but it could be, sort of ….. More rain? Well the country is drying out, so floods aren’t really wet because … and I did I mention that Antarctica is melting. Through it all, through the entire wince-worthy demonstration of a learned man’s descent to intellectual incontinence, Jones smiled at his mate “Tim”, set up the easy questions and endorsed with soft words every silly syllable that dripped from the frothing lips of his poor, unfortunate guest.

Not that Jones had any reason to worry. Given the Abbott government’s refusal to remind the ABC of its Charter obligations, the benign protection of Malcolm Turnbull, Minister for Admiring Mirrors and Communications, and the Coalition’s refusal to moot selling off the broadcaster or, at the very least, breaking it into four or five smaller and more easily managed competing fiefdoms, Jones will be there, smug and overpaid, for quite some time to come.

Unless this government learns to recognize enemies when it sees them, the same cannot be said of Abbott & Co.