The one sure “certainty” about the IPCC’s methods

The IPCC’s “certainty” about its certainty is a fraud, and latest report makes that clear. In order to fully appreciate its legerdemain, we need a reminder of how real scientists deal with uncertainty.

Let us start with the concept of time, which can now be measured in intervals hundreds of trillions of times smaller than a second, thanks to clocks made from ytterbium, which have the potential to be 100,000 times more precise than the current gold standard – the caesium atomic clock. All you need to do is cool ytterbium atoms to within ten-thousandths of a degree above absolute zero, and use a laser to stimulate transitions between two of the atoms’ energy levels. Such clocks would gain or lose less than a thousandth of a second in around 100 million years. I find this stuff absolutely awesome  — not as in “your new hairdo is awesome”, but as in truly awe-inspiring.

Precise time-keeping is just what we need to Usain Bolt reduce any uncertainty associated with his world records. If the International Olympic Committee (IOC) engaged physicists to improve timing techniques, atomic clocks would probably not be recommended (despite their incredible performance). Instead, the physicists would methodically go through all the uncertainties involved and improve them, starting with the most significant ones.

For example, if elderly time-keepers were used to manually start and stop atomic clocks, uncertainty would be introduced at each point, the amount of uncertainty depending on the steadiness of hand, reaction times, anticipation, concentration, etc (I am not having a shot at the admirable people who volunteer to assist such events, or at the elderly — I am heading in that direction myself). I am simply pointing out how uncertainties emerge. In the above example, about half a second of uncertainty is introduced, twice, and they are additive. So, under this regime, Usain’s world record would be 9.58 ± 1 seconds (if you discount the poofteenth of a hair’s breadth of uncertainty introduced by the atomic clocks themselves, and the numerous other uncertainties).

The physicists would point out that the number of significant figures (numbers after the decimal point) is dictated by the uncertainty, and unfortunately for Usain, his record would have to be rounded up to 10 seconds, or a better method of timing employed. It would not occur to the physicists to call in other atomic clock specialists and simply vote the uncertainty away, which is how the IPCC goes about its business.

Atomic-clock scientists and those who bill themselves as “climate scientists” and “IPCC authors” have one thing in common – they both call themselves scientists. Unfortunately, this is where the similarity ends.

The IPCC calls upon its “scientists” to produce every six years an update on the state of the Earth’s climate. The climate models and the input assumptions are reviewed and refined, and the latest current and historic meteorological data is massaged into shape. If their latest publication (AR5) is anything to go by, scientific uncertainty does not figure prominently in their thinking, nor does a comparison between previous projections/predictions and the latest meteorological data.

The IOC, not exactly a beacon of integrity itself, would nevertheless expect physicists to improve timing techniques every four years, and to reduce uncertainty at every turn. Such physicists would ensure that, at each point, uncertainty is improved, the improvements are real and measurable, and that any claimed reduction in uncertainty boasts documented proof that can be checked and improved again during the next four years.

The IPCC apparently focuses not on reducing scientific uncertainty, but on scientists’ certainty. Whatever they take that word to mean, it certainly does nothing to enhance the public’s certainty. Take the “improvements” during the review of the final draft of AR5. The complicated figure below, courtesy of Climate Audit,  shows the recent observed temperature data in black, and the AR4 projections in orange shading. That the orange area is more of a wedge than a line gives you some idea of the uncertainty IPCC is prepared to admit. Note that the data for the past five years all fall outside the orange area, and thus do not match the projections. They do, however, fall inside the grey area. Unfortunately the grey area has no known meaning. 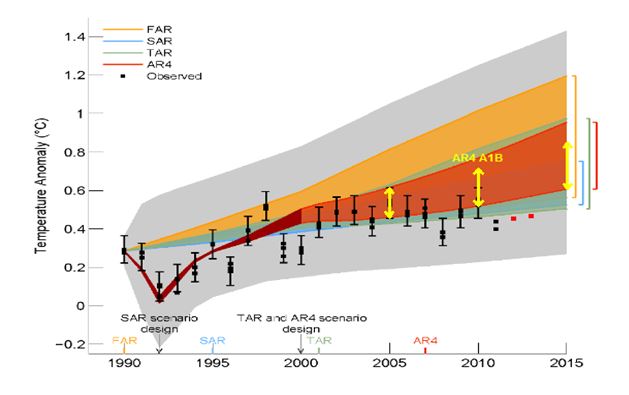 In the published version of AR5, the graph had been “improved” by the removal of the meaningless grey area. Unfortunately it was further “improved” by the inclusion of so many squiggly lines that s the mismatch between projections and reality has been neatly and thoroughly obscured. 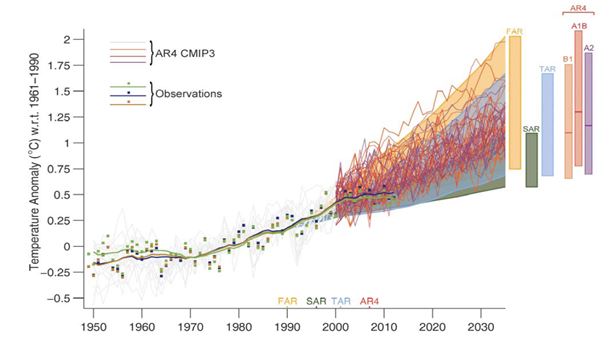 Nevertheless, the IPCC’s “certainty” about the results has improved, up 5.555556%, to 95%. This is despite little real reduction in uncertainty in the key assumptions and data that drive the models. Radiative-forcing uncertainty, for instance, has doubled, as explained here.

And then there is the small matter of projections and reality.

The IPCC’s famous hockey stick has transformed from something used by an aggressive athlete and now looks like an object attractive to a child and recognised by those adults who read Harry Potter tales to them.

If you were to ask physicists how certain they are about atomic clocks, they would give you a puzzled look and respond with explanations of the astoundingly low uncertainty they have calculated using standard scientific techniques. Ask climate “scientists” how certain they are about their latest report and they  confidently reply “95%”. Then they direct you to several hundred pages of dead trees as their proof.

Atomic-clock scientists can only be embarrassed by the behaviour of IPCC’s climate “scientists”. Usain Bolt does not know how lucky he is that the IPCC is not involved in measuring athletic events.

Mal Wedd is a physicist inspired by scientists who advance mankind’s knowledge. He is depressed by pseudo-scientists who push their patrons’ and funders’ agendas by debasing the impartial quest for truth.

Green Academics Are At It Again