They Can’t See the Forest for the Disease 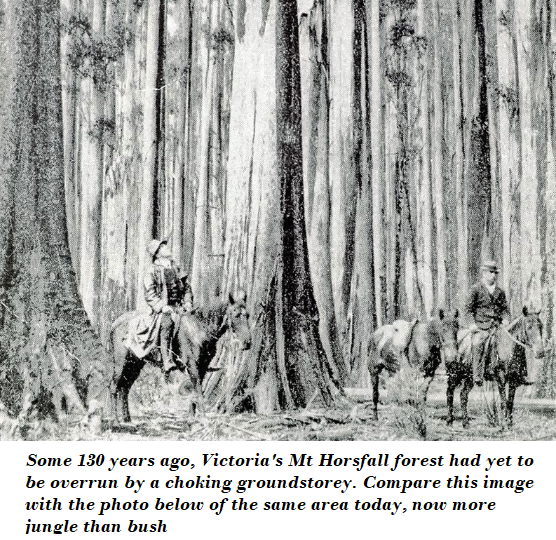 In Firestick Ecology I wrote of “rarity, decline and pestilence” including Devils’ Disease:

The most dramatic faunal decline in Australia during my lifetime has been that of the common and widespread Tasmanian devil. When cyclone Tracy levelled Darwin in Christmas 1974, I was a chainman on forest assessment in eastern Tasmania. My job was dragging a 100 metre steel survey band on a compass bearing through the bush and establishing a systematic sampling grid.

It was easy walking through open forest and I rarely needed to use my brush hook. Devils are nocturnal, but I saw one in daylight and several along roads at night. They were very common roadkill. The estimated population at that time was about 100,000.

Thirty years later, generous support from the Gottstein Trust allowed me to return to Tasmania during my investigations of chronic eucalypt decline. A forestry pathologist had kindly agreed to show me examples of ‘east coast dieback’, ‘gully dieback’, ‘high altitude dieback’, ‘regrowth dieback’ et cetera. I was not at all surprised to see that these supposed ‘diseases of complex etiology’ were obvious manifestations of chronic eucalypt decline consequent to lack of mild burning.

However, I was horrified to find that the open forests of my youth were no more. I couldn’t imagine anyone attempting to cut a line on a bearing through the new scrub and assess the dead and dying trees for timber. Nor could I understand how the extent of scrub invasion and tree decline could go unnoticed by the authorities and the general public.

I wasn’t the slightest bit surprised to learn of the population crash of Tasmanian devils and the severe decline in eastern quolls, because their habitat was gone with the open forests. The estimated population in eastern Tasmania is now about ten percent of what it was when the east-coast forests were mostly grazed and burnt.

In my opinion, the facial tumour disease in devils, the various ‘new’ phytophthoras and other fungi that are occupying the plant pathologists of the Centre of Excellence for Forest Health in Western Australia, the ‘new’ psyllid infesting grey box foliage on Sydney’s Cumberland Plain etc. are distractions from the fundamental issue of sustainable management.

Around 40,000 years ago, Aboriginal communities across Sahul – Australia, New Guinea, Tasmania and what are now many smaller islands – used fire to create open and mainly grassy 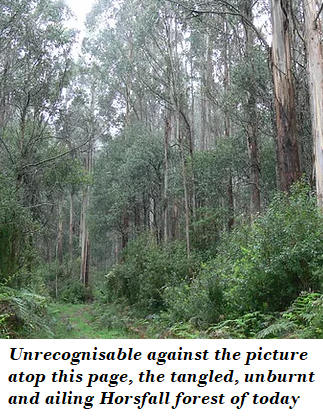 ecosystems. They exterminated megafauna in the process by eliminating their browse. The most durable culture in the world subsequently relied on mild burning to sustain their various economies and ecosystems. Aborigines survived hugely rising sea levels that made our land the largest island and smallest continent, as well as volcanic upheavals that further transformed the physical landscape. Dramatic climate change didn’t affect their ability to manage fire regimes, except in north Queensland, where it became too wet to burn the landscape.

When, firstly European diseases and, secondly, European people disrupted Aboriginal burning in the rest of the country, pestilence and holocaust ensued. Lack of mild burning overturned nutrient cycling processes that had sustained eucalypts and herbage for 40,000-plus years. Soils changed, tree roots grew sick, canopies thinned and pests that naturally take advantage of weak trees irrupted into plagues. Mistletoe, beetles, weevils, psyllids and koalas were but a few of them. Their predators irrupted in turn. Bellbirds eat psyllids, and dingoes and carpet snakes eat koalas. They all flourished, as did invasive undergrowth, both native and exotic.

Dense scrub, robust tussocks, or forbs choked out herbal diversity, and small mammals which relied on it for nutrition became extinct. This was largely in semi-arid areas where there was no logging or clearing. In forests, three-dimensionally continuous fuels exploded into firestorms and megafires when ignited by lightning in extreme weather. The first was in South Gippsland around 1820, thirty years after the Yowenjerre were ravaged by smallpox. The second, Black Thursday, incinerated 5 million hectares of Victoria in 1851, less than 20 years after European occupation.

Then there was Red Tuesday 1898, Black Friday 1939 and so on, even before ‘scientific concerns’ about global cooling made an about face and ‘climate scientists’ started to warn us about dangerous warming. By the mid-20th Century, foresters realised that attempting to suppress fire was futile and environmentally destructive. They reintroduced mild burning across the landscape. By the end of the century, green ideology had disrupted it again.

The ANU Fenner School’s, David Lindenmayer has spent 30 years researching and publishing 28 scientific articles and books per annum (that’s less than two weeks per article), arguing that logging has transformed our forests and threatened whole ecosystems with extinction. But even when forests aren’t exploding in megafires, they’re in very serious trouble. Hence, the investigations of chronic eucalypt decline that took me across Australia and Bass Straight.

But even when forests aren’t exploding in megafires, they’re in very serious trouble. Hence, the investigations of chronic eucalypt decline that took me across Australia and Bass Straight. Returning to my narrative in Firestick Ecology:

Eucalypts and devils are diseased and declining because their habitats have disappeared – not cleared, but changed beyond recognition since mild fire has been excluded from the landscape.

In the absence of such disturbance, co-evolved diseases and their hosts remain in balance. The exotic chytrid disease has apparently extinguished many species of frogs because it can survive in other, more resistant species. But devils’ cancer lives in no other species. Diseases restricted to a single host usually reach a balance as host populations are thinned out, transmission is reduced, and resistant genotypes survive.

[Griffith University’s] Hamish McCallum considers that the threatened extinction of the devil illustrates some important principles about disease and conservation biology.

I find it hard to reconcile with the theory of evolution. It’s difficult to imagine how an organism could be fit enough to reduce its host population by 90% in a short space of time but not fit enough to achieve its own long term survival by reaching a balance with its host. Time will tell.

In the meantime it illustrates a fundamental principle of land management for conservation, and the disastrous consequences of true disturbance.

Now, nearly two centuries after Darwin wrote On The Origin of Species, and after millions of dollars of research, including counter-productive captive breeding and release programs, the experts have seen the light and stopped trying to fight natural selection. Here’s part of a story from the Tasmanian Times that appeared under the headline “Darwin and the devil’s plight: Is natural selection finding a way to combat cancer?”

Research into the deadly cancer affecting Tasmanian devils has found the marsupials are mounting their natural defence against the disease. …

The authors found that the evolutionary responses of devils to the cancer epidemic are likely to result in devils coexisting with DFTD.

McCallum was one of the authors of the study, which also featured in Science, the journal of the American Academy for the Advancement of Science:

Tasmanian devils claw their way back from extinction

The reduced density of devils accounts for much of the decline [in disease], Patton suggests, as animals come into contact with fewer of their fellows. Remaining devils may also have better immune systems …

Professor McCallum also trumpeted his “pioneering application of genomic analysis” in The [one-sided] Conversation. Unfortunately, the problem remains that the devil’s long-term viability is diminshed because its habitat and food are much reduced as a consequence of chronic eucalypt decline, scrub invasion and megafires. At the same time, irruptive species continue to take advantage of the physical and chemical changes in the environment as more country is turned upside-down in the absence of ecological maintenance by mild fire.

Two centuries ago, explorers described dramatic environmental changes when Aboriginal burning was disrupted. Alfred Howitt recognised that chronic eucalypt decline, insect plagues and woody thickening were consequences. Half a century ago, Bob Ellis and colleagues in Tasmania started to unravel the underlying soil and nutrient cycling processes. Jill Landsberg in Canberra established that similar processes are at the root of rural tree decline in improved pastures.

Two decades ago, drawing on John Turner’s expertise in soils and nutrient cycling, I began to put this research together with my observations of our deteriorating landscape over the previous twenty years. Turner and colleagues analysed soil changes with time since fire in dry forests at Eden and explained how they affect eucalypt nutrition and health.

Other scientists in Tasmania and Western Australia, thought that the problem was a result of competition from midstoreys developing in the absence of mild fire. I demonstrated they had it back-to-front. Canopy decline precedes and promotes scrub invasion. Nevertheless they invited John and me to join in a literature review supporting their hypothesis and research funding.

Naturally we declined. However, they got their funding to study ‘High Altitude Dieback’ in TAS and Tuart decline in WA. They repeated some research by Bob Ellis that had long ago disproven their hypothesis, and employed fancy modern technology. Eventually, at great cost, they proved themselves wrong in their published results of 2011.

Now, after yet another decade, NSW Natural Resources Commission is organising more research on ‘dieback’, at a cost of $1.3 million. They’re advised by Phytophthora enthusiast, Professor Giles E StJohn Hardy from WA – Director of the re-badged Centre of Excellence on Climate Change, Woodland and Forest Health. NRC engaged two of his subordinates on a literature review to ‘inform’ what many would see as lavish spending.

Since then, the Fenner School’s Dr. Matthew Brookhouse has presided over a seminar about the newly invented ‘Snow Gum Dieback’. It’s supposedly caused by Phorocantha beetle grubs – the same type of beetles that were thought to cause Tuart decline before pathologists belatedly realised they are but another symptom of and contributor to eucalypt decline in the absence of mild burning. When I pointed this out, Brookhouse responded that it’s too early to look at “ultimate causes”. We supposedly need to observe spatial and temporal patterns in Snow Gum Dieback. So my four decades of observing patterns in chronic eucalypt decline across the country count for nothing against the disproven assumptions emerging from the Fenner School.

During the Black Summer drought, I observed at my sister-in-law’s property near Lithgow that  snow gums with roots smothered by garden mulch died, whilst adjacent trees in a firebreak maintained by mild burning remained healthy. I’ve shown and told of countless similar examples across Australia proving that human mismanagement, not climate change, pests, pathogens or diseases, causes chronic eucalypt decline. Academics dismiss such truly empirical evidence as anecdote, and build models to ‘verify’ their false assumptions.

Imagine the advances that could be made if academics and bureaucrats employed the scientific method of observing, thinking, hypothesising, testing and modifying, as Darwin did. Fairdinkum science confirms traditional Aboriginal knowledge. Our environment and economy can be quickly and easily restored. We need only divert a fraction of the expenditure wasted on self-perpetuating research – looking for problems rather than solutions, towards sustainable management.

Vic Jurskis worked for NSW Forestry Commission as a labourer, forester, researcher, manager and finally, Silviculturist for the Commission’s Native Forest Division. He investigated chronic eucalypt decline across Australia in a Fellowship with the Gottstein Trust, and with a Maxwell Ralph Jacobs Award from the Australian Academy of Science. He has published two books, Firestick Ecology, and The Great Koala Scam, both available from Connor Court.