Mulling through old International Panel on Climate Change (IPCC) reports a few weeks ago, I had an epiphany regarding another damaging impact of carbon.  Not only does the carbon we uncaringly belch into the atmosphere ruin irreparably the weather for future generations, it may also cause runaway human growth (specifically height).

By carbon, I actually mean carbon dioxide. Carbon burns in air to produce useful energy and carbon dioxide (CO2), so if the carbon at the start of this sentence was actually CO2, it would suggest that CO2 burns to produce carbon dioxide dioxide, which begs the question, should this be called carbon as well?

My epiphany led to research which started with my own height records that for my first 17 years, my parents faithfully recorded against the back of the dunny door. I felt I had to go back further in order to create a longer data set and allow decadal analyses in keeping with IPCC methods. I thus extrapolated the decade preceding my birth. For most of this time I was merely a glint in my old man’s eye, a notoriously difficult thing to measure. For the last nine months of the decade, however, I grew rapidly and peaked at 220mm, making the decadal average 9± 0.01mm.

The next decade also showed rapid growth, suspiciously coinciding with the beginning of rapid growth in atmospheric CO2 levels. The raw data was very high quality, although a systematic correction was necessary because of what we physicists call the DDHR effect. IPCC data also often needs corrections, so this is nothing unusual. Midway through my 13th year, the dunny door hinge replacement, although mainly employing the same screw holes, resulted in 2 mm growth that week (either that or the door was rehung 2 mm higher). Thus in keeping with IPCC protocols, the DDHR effect required 2mm to be subtracted from the earlier data.

After age 17, the data becomes more irregular and was subject to another semi-systematic error, the UHI effect. IPCC data is corrected for a similarly named effect – the urban heat island effect – in which weather monitoring stations that become increasingly effected by growing urbanisation around cities (which artificially increases temperatures). Thus IPCC tends to lower old temperature data. My UHI (urban heel-innersole) effect is similar, and is caused by girls. At around age 15 girls become more interesting and taller, causing boys to start wearing shoes with rather sturdy heels, and sometimes up to 3 sets of innersoles for added comfort. This artificially increases their height, and as per IPCC techniques, requires older data to be corrected downwards to compensate. 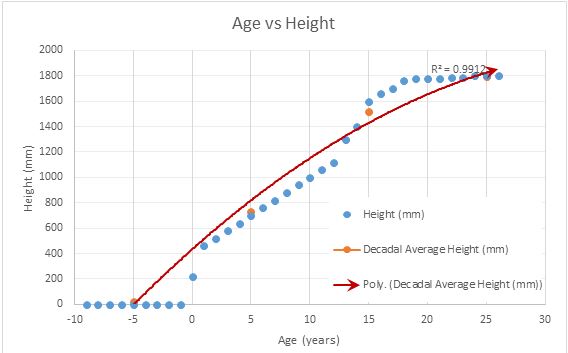 The plot of the adjusted decadal height data makes alarming viewing (see the chart above). The correlation with CO2 (not shown on the graph but is nonetheless very real) is as unmistakable as it is undeniable. As is the case with our climate, if we don’t act urgently my height will approach a tipping point beyond which runaway growth is a distinct possibility. The numerical model I constructed to predict/project future height, is based heavily on widely accepted (97%) IPCC methodology. As I am a member of the post-modern science movement, which is not constrained by old-fashioned concepts like 100% representing the whole, I can confidently state that I am 110% sure of the results.

The undeniable facts are (that is, the adjusted data and the model shows):

I urge younger readers to monitor their own situation and act urgently to prevent a catastrophe. Grant applications should be written and submitted to all funding agencies, from Local Government to the UN. Action should not stop there, there are numerous symbolic measures created by the IPCC and its flock that can be applied to create the impression of caring and action. And doesn’t Mother Earth need us to act!

Mal Wedd is a physicist who, just like many members of the Climate Commission, has no particular expertise in meteorology, modelling or statistics. He is the shortest member of his family, but is taller than most Climate Commissioners

Absurdity Puts Its Skates On