A good word for drought


The south-west of Western Australia is currently experiencing a period of about 25 years of below-average rainfall, also known as a drought. Whether this is due to human-caused global warming/climate change or whether it is a phase of natural variability associated with solar, oceanic or atmospheric cycles is not clear at the moment. At least it is not clear to me and to those with a longer perspective on climate variability than the weather patterns since 1950.

On the other hand, to most people it’s all gloom and doom. Average rainfall has declined by 30%, never to return, we are told, and this means water shortages, carnage to the flora and fauna, more severe bushfires, crop and farm failures, and the disappearance of suburban parks and gardens. Tim Flannery has gone so far as to declare that Perth is on the way to becoming a “ghost city’.

It is a characteristic of people with these sorts of beliefs never to look on the bright side. They are convinced that any environmental change always results in losers, never winners.

I had an interesting discussion on these issues with a friend not long ago. I was commenting (with some pride, as I had had a hand in their creation) on the beautiful regrowth karri forests that had come away in the wake of clear-felling for sawlog and woodchip production in the 1960s and 1970s.  Back then, these operations were seriously controversial, with many people convinced that logging would destroy the forest. Prominent green academic Arthur Connacher went so far as to describe the forestry program as “desertification”,  conjuring up an image of the karri forest converted by foresters into a rolling sea of empty sand dunes, similar to the Sahara.

On the contrary, nearly half a century later, the new forests are magnificent, full of beauty and vitality, replete with their full complement of flora and fauna, and increasingly being visited with enjoyment by tourists, most of whom cannot distinguish them from the older forests in national parks. “Yes,” said my friend, seizing on an apparent weakness in my position, “but you have not taken into account the increased post-logging populations of the fungus Armillaria luteobubalina in the regrowth forests which will result in death of karri trees before they can mature”. 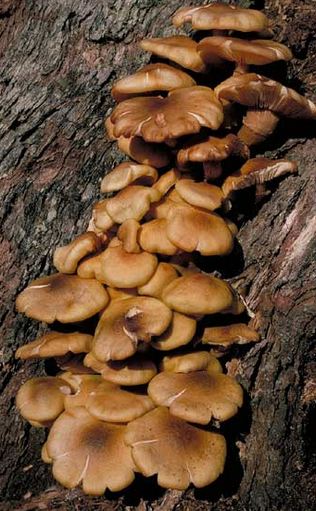 Well actually, I did know about Armillaria lutiobubalina (previously known as A mellea and shown at left). This is the Honey Fungus, a native species that grows on stumps and occasionally ring-barks  a tree or two. I had been one of the first to report its activity as a pathogen in the karri forest in the 1960s. But I had another point to make: “The thing you need to do” I suggested “is to look at this from the perspective of the fungus, not the perspective of the karri trees. Armillaria is a native and naturally rare in the southern forests. Thanks to the logging and regeneration it is now enjoying favourable conditions, allowing it to flourish. These conditions will become less favourable in the future as the stands mature and when fuel reduction burning is carried out, but in the meantime, be happy for it.”

Not surprisingly, the ups and downs in the life of a fungus generated little interest and my argument fell upon deaf ears. Fungi are like krill – nobody gets uptight when they are given a hard time.

But it started me thinking about some of the other environmental winners in south-west WA at the moment. Of these probably the most significant has been the decline in the virulence of the jarrah dieback disease (caused by another fungus, Phytophthora cinnamomi) during the current drought. Back in the wet years of the 1950s, 1960s and early 1970s, dieback disease was breaking out everywhere in the jarrah forest and in heathlands along the south coast, and fears were expressed that the disease was fatal. The disappearance of jarrah was seen as a real possibility. Intensive research, however, established that the disease only ran its full course in certain topographical situations and certain soil types, typically in the forest lowlands where water accumulated during wet winters and springs, allowing the fungus to proliferate. 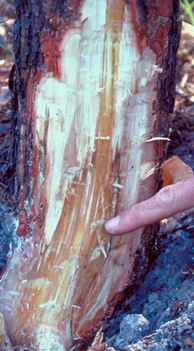 Over the recent drought, jarrah dieback (left) has almost fallen off the agenda. Research has been cut almost to zero, quarantine areas are no longer policed, vehicle washdowns are not compulsory for people driving into the forest, and the issue is rarely mentioned in the media.  This is not to say that dieback is not still a worry, especially to heathland species on the south coast, but the virility of the disease in the jarrah forest has declined dramatically, a direct result of the below-average rainfall of the last 25 years.

It is a similar situation with respect to the second great environmental threat of recent times: dryland salinity in the wheatbelt. During the wet years in the decades after 1950 salinity was regarded as a massive problem in WA. Saline groundwater was coming to the surface right across the landscape over millions of hectares, especially in the lowlands and on the heavier soils. Many scientists predicted that farms, towns, river systems and wetlands would all soon be white with the snow of salt, and abandoned to the elements. The farming community was in turmoil, and energy and money was poured into research and landcare and catchment management programs.

Like dieback, salinity is a serious threat (especially to remnant vegetation and wetlands in the wheatbelt), and needs to be managed. But the direst predictions of the doomsters have not eventuated, indeed they have faded away. This is because salinity is closely associated with rainfall: the wetter a cleared landscape, the more saline groundwater intersects the surface.  Drought has the opposite impact.

And also as is the case with dieback, salinity has not gone away, but the intensification of the problem has not followed the projections of the experts. This is a classic beneficial impact of ‘climate change’.

There are other positive outcomes of the Western Australian drought that I could mention, for example the investment in sea water desalination. This is technology which can only prove to be of value in the future, either on the coast or in the wheatbelt if we enter another period of wet years.

There have also been no serious floods in the south-west. It is often forgotten that during the 1950s there were massive floods along the Avon River, and these caused serious damage in the riverside towns of York, Northam and Toodyay.  The government response to the floods was a program of ‘river training” that did irreparable damage to river and riverine ecosystems.

And just today I noticed another pleasing benefit of the big dry: there is currently a glorious flowering of eucalypts across the Avon Valley and in the northern jarrah forest. This is a response to last year’s very dry winter, but the lovely thing is that it has provided a superb panorama of forests laden with blossom and thousands of hectares of nectar for bees and native birds.

On the debit side, two wonderful opportunities have been provided by the drought but not taken up. First, the drier weather has resulted in many more warm sunny days in winter, in which fuel reduction burning could safely take place, thus lessening the summer bushfire hazard. Regrettably, the agency who should be jumping at this opportunity has been sitting on its hands.

Second, a major program of broad-acre thinning of regrowth jarrah forests on water catchments should have commenced. This would have had numerous benefits, including a healthier and more drought-tolerant forest, increased run-off into reservoirs, recovery of streams and the generation of biomass as fuel for electricity generation. Despite 40 years of research demonstrating no downsides, forest thinning is vehemently opposed by safe-the-forest activists who portray it as “forest destruction”.

When I studied ecology as an undergraduate a long time ago (back in the wet years) we were taught that in the wake of every environmental change or disturbance there would be winners as well as losers. This principle seems no longer to be taught or understood. The result is a community infected by doom and unable to enjoy the glorious uncertainty of fluctuating circumstances. Inevitably, some of these will be positive and some negative, and it would make for a happier world if the positives were celebrated, just as the negatives are bemoaned.

Breezes That Will Never Beat The Heat

Life of the Murray