The fine art of scaring children

Ballarat has a great art gallery, with its original architecture and gold-financed 19th century acquisitions. I was stooging around there last week after enjoying its show on floral illustrations, dating back to William Dampier.In the main halls it has an “art trail” for children, directing them to half a dozen works. Each has a screed alongside backgrounding the painting and giving the kids some quizzes.

So far so good…until I began reading those screeds.

The first involved an aquatic storm scene by ship captain-turned-artist Johan Bennetter (1886), A Bore on the Hooghli. Sailing ships and lifeboats thrash about amid surges and spume under a furious sky. (A “bore” is a storm surge after a very low tide). 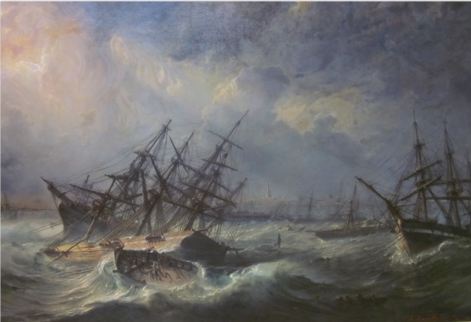 The screed quickly cuts to the chase:

“Climate change, bringing with it an increase in extreme weather and rising sea levels, means that phenomena like the famous bores on the Hooghli at the Bay of Bengal now threaten the lives and livelihoods of literally hundreds of millions of people. This is one of the places in the world most vulnerable to catastrophe arising out of rapid rises in sea level…

What other changes in natural phenomena do you know of as a result of global warming?

How will predicted climate change affect your life?”

Let us move on to the next way-station along the kiddie-art climate trail.

At Kiddie Station 2 we find David Davies (1890), Under the Burden and Heat of the Day, which shows a swaggie  near-collapsed from heat and being offered a mug of water by his fellow swaggie in the red shirt. 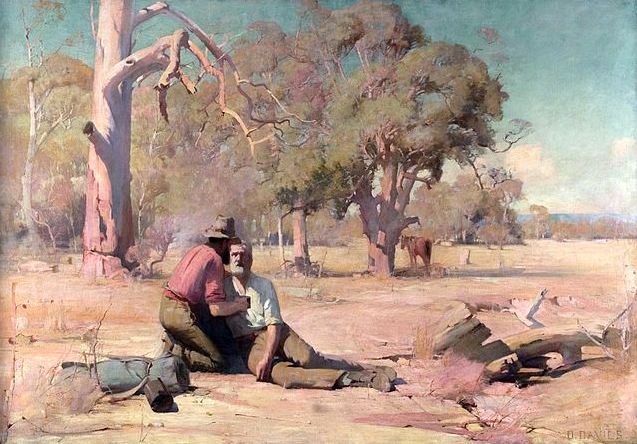 “…Australia is getting hotter and climate change has arrived. There is more on the way, but how much of an increase will depend on us. How do we cope with such heat? Massive air conditioner use threatens peak electrical supply while the electricity used to power them comes mainly from coal. Greenhouse gases are produced to cope with the symptoms of existing greenhouse gases – we are kelpies chasing our tails on a hot day.

Renewable energy, better house design and a reduction in the atmospheric levels of greenhouse gases will all be needed if we are going to beat the heat…

How can we keep cool without making demands on energy supplies? How do we know whether our individual actions make a difference?”

It was a fairly hot day outside but cool inside the gallery. Reason: It is air-conditioned.[2] [3]

Kiddie Station 3. A modern work: Tony Cran (2007) – “We’ve come for what’s ours” . This shows a kangaroo, a reindeer and a wolf* on the coastline, two of them brandishing a eucalypt swatch. 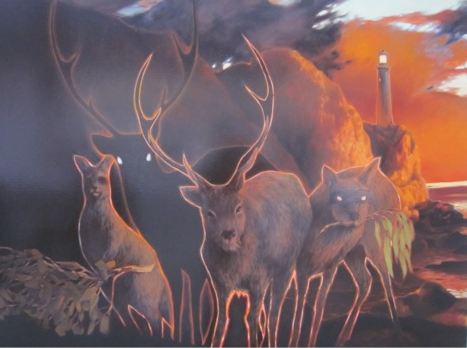 Our narrator tells the kids:

“In this vision we have poisoned our environment with toxic waste and used up all the natural resources until the earth could no longer support us…In this painting, people are just a memory. The earth has survived and with it some of the plants and animals which lived in harmony with nature, only taking what they needed and adapting…

Who should be responsible for the effects of our heavy consumption of resources? How can we reduce the cost of sustaining our natural resources?”

To me, this draws the long bow. For a start, although "people are just a memory", a lighthouse in the background is still lit up. Maybe the reindeer is maintaining it. Second, it’s nice that the three animals are living in harmony with nature, only taking what they need. Let’s hope for the ’roo and reindeer’s sake that this particular wolf is a vegetarian.

At Kiddie Station 4, beside Mardayin Design by John Mawurndjul, the screed reads:

“…Australians are rediscovering how to treat this ancient place after unsuccessful attempts to implement foreign land management practices.

How can we learn about sustainability and solutions to climate change from indigenous art and culture?”

Kiddie Station 5 uses Murray Griffin’s (1934) Golden Barriers to make its, er, educational point. This is a traditional Australian landscape of rolling pastures with scattered eucalypts and old eroded hills in the distance. 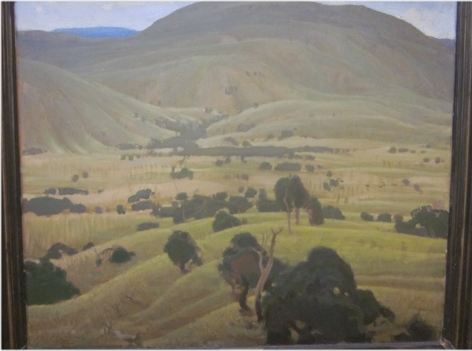 “This scene of a rural landscape was painted at a time when the most accessible and fertile areas of the country had been adapted for farming and before many of the problems we are now experiencing were becoming recognized [eg erosion, salinity and poor water quality].”

The blurb goes on to patronise ignorant farmers who had, it said, felled trees for firewood and building materials, and cleared land for crops and grazing. The gallery clearly sees this landscape as an example of what the Germans used to call entartete Kunst (degenerate art).

“What do you think rural landscapes will look like in the future?”

Our kids’ tour is nearing its finale with Walter Withers’ (1898) The Last of Summer. This shows a row of settlers’ cottages still within bushland, paddocks and scrub, with a gathering storm and a solitary female in the middle distance. The dimming light is beautifully handled, a Withers trademark. Incidentally, there is no human-caused litter in the scene. 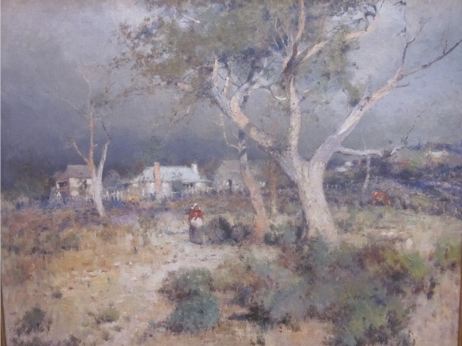 Of this we are told:

“Our modern lifestyle encourages us to buy goods with a lot of packaging and non-refillable containers, this means we produce a huge amount of rubbish, putting pressure on landfill and creating enormous environmental problems…Early Europeans who settled in Australia produced very little rubbish…They had very little packaging…Now we live at a fast pace. Rubbish has become a real problem because people buy food at supermarkets, which use more packaging and non-refillable containers than small shops. (Blah blah from any “sustainability” boilerplate).

To get with the spirit, I’ll do my own screed for an extra kiddie station, this one inspired by the gallery’s Ajax and Cassandra by Solomon J. Solomon (1886). 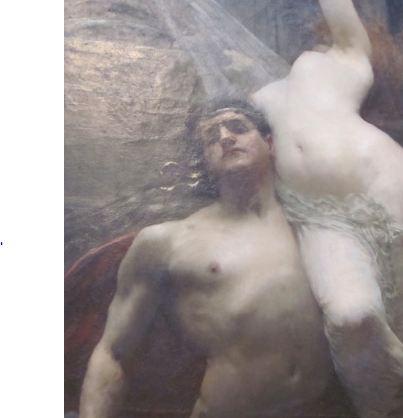 This is what climate change looks like. It is too hot to wear many clothes. A lady tries to hail a taxi but in a desperate attempt to reduce C02 emissions, her friend carries her home instead.

Do you support the carbon tax designed by the Australian Greens Party, which will prevent these calamitous climate outcomes?

(*Editor’s note: A Quadrant reader believes two members of the eco-avenger trio in Tony Cran’s painting have been misidentified. Rather than a wolf, he believes the dog-like creature is a Tasmanian tiger, while the antlered one may well be a sambur deer. That’s the thing about socially-aware art; it is a catalyst for debate.)

Tony Thomas doesn’t know much about art but knows what he likes.

[1]   This was taken up by Oxfam and quite recently Melbourne tramstops were plastered with this horrific scenario, to stimulate donations.

[3] Is it just coincidence that “a one-stop shop for people seeking information on sustainable living practices” is only five doors east of the Gallery? This shop is backed by various State departments and busnesses seeking to make income from green renovating.

Why We Burn Again and Again