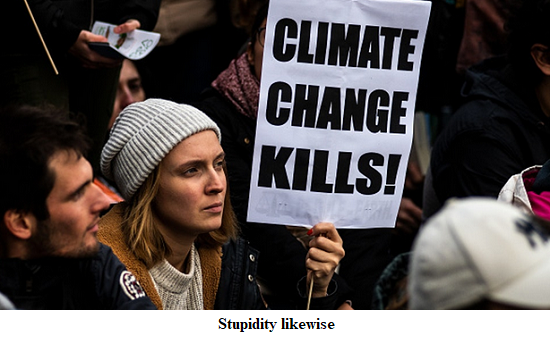 Graham Lloyd, the environment editor at The Australian, has a moderately good record of digging up politically incorrect material which dispels this or that building block of the climate scam. He’s never shy of reporting increased coral on the GBR, for instance. I’m not sure how he survives. Glad he does. Sure, his newspaper is part of the problem, but any port in a storm.

This time the ‘wayward’ material is a study which gathers and analyses recent evidence on the effect of climate change on extreme weather events and, also, on agricultural productivity. It’s by some Italian scientists led by Gianluca Alimonti, from the Italian National Institute for Nuclear Physics and the University of Milan. The study can be found in The European Physical Journal Plus. It was published online on January 13, 2022. Its conclusions undermine the daily propaganda that passes for news on the mainstream media. No, that flooding is not unusual; nor is that bushfire; nor that hurricane; nor that drought.

Others have said much the same thing. Michael Shellenberger and Bjorn Lomborg, as examples. However, the Alimonti study has a particular focus on extreme weather events which, I think, stands it somewhat apart. It’s well worth reading and promoting. We know that it’ll be otherwise buried; shunned — the practised technique of leftists. Indeed, so far as I’m aware, but for Lloyd’s piece, it had already been buried and shunned.

What’s the point, you might ask? No minds will be changed. Personally, I know it will not change the harping about the environment in the intercessory prayers at my church. It certainly won’t change the alarmist stance of the hierarchy of the Anglican and Roman Catholic churches. It won’t change the stance of the IPCC, the ABC or the BBC. Or the ACTU or Big Business. Or David Attenborough or the World Economic Forum.

So, what is the point? Simply to keep the truth on life support. Who knows, as unlikely as it seems, the political mood might change. Facts dispassionately sought after. Western-civilisation haters, Marxists and rent-seeking nihilists dispatched to the Phantom Zone. Sorry, got carried away. Adam Bandt, the Teals and woke corporates are probably fixtures in any conceivable future. Still, gotta keep buggering on. Hence a few tasty excerpts from the study to whet the appetite. First to the main conclusion: “…on the basis of the observational data, the climate crisis that, according to many sources, we are experiencing today, is not yet evident.”

Hurricanes: “To date, global observations do not show any significant trends in both the number and the energy accumulated by hurricanes.”

Floods: “A long list of studies shows little or no evidence of increased flood magnitudes, with some studies finding more evidence of decreases than increases.”

Droughts: Quoting the IPCC’s fifth assessment report (2014), “Conclusions regarding global drought trends since 1970 are no longer supported.” Quoting a separate study covering the period 1981-2018, “results show that for the entire globe, hemispheres and the main grain-producing countries (China, USA and India) drought has not intensified and expanded during [the time period].”

Agricultural production: Cites studies on satellite data which “show greening trends over much of the planet that are pushing back deserts around the world.” Cites an Australian simulation study, showing the global upward trend of gross primary productivity (GPP) due to increasing atmospheric CO2. To wit, “Overall, the increase in GPP from 1900 to 2020 is estimated to be 30% while it is estimated that it will reach 47% if CO2 would double [from its pre-industrial level] to 560 ppmv.”

Since its origins the human species has been confronted with the negative effects of climate …Today we are facing a warm phase and, for the first time, we have the monitoring capabilities to evaluate its effects. Fearing a climate emergency without this being supported by data means altering the framework of priorities with negative effects that could prove deleterious to our ability to face challenges of the future, squandering natural and human resources  … We need to remind ourselves that addressing climate change is not an end in itself, and that climate change is not the only problem that the world is facing.

It goes without saying that the authors make the “right” noises at times (“This does not mean that we should do nothing about climate change…”) to ward off cancellation maybe. However, the study stands as an indictment of our age. I say ‘our age’ advisedly, to encompass the modern-day saturation of most minds with an unthinking and moronic belief in a speculative hypothesis of impending climate doom built on tenuous modelling accompanied by a series of unworkable and crippling measures which have zero chance of combatting the doom, even if it were real, which it isn’t.

You can talk about primitive ages all you like. About Neanderthals, cavemen, witchcraft, sorcery, voodoo. This one takes the cake. And, incidentally, the grotesque response to the virus put a cherry on top. Some say it’s due to the decline of religious belief. Not sure about that. Listen to the Pope, the Archbishop of Canterbury, church congregants. I imagine it’s a morbid hysteria of some kind. Hopefully it will pass, as did the Stone Age.

15 thoughts on “Climate Change and the Resolutely Blind Eye”

‘The Science’ Isn’t Settled, Only the Spin