The surprise improvement of two percentage points in Labor’s polling on a two-party preferred basis in the latest Nielsen poll, and the large improvement for Julia Gillard in the preferred prime minister stakes, has led some commentators to suggest the carbon tax is no longer a major political issue. Given that the imposition of the tax has been Tony Abbott’s principal attack dog, he is now, it is suggested, on the back foot.

The reasons for Labor’s improved polling are difficult to identify. They may well be temporary and/or due to influences other than apparently limited objections to the carbon tax, even though its imposition is adding to the increase in prices, particularly electricity prices. The fact that the tax has only caused a relatively small increase in prices (but which the Commonwealth Statistician says he cannot calculate) still leaves open the question of why such a tax policy is needed.

Indeed, there is now a case for Abbott to lift his game on the global warming issue generally. At the present time the Coalition accepts the need to reduce emissions of CO2 into the atmosphere by taking various forms of direct action that would limit such emissions. The aim is to effect a 20% reduction by 2020, which is the same as the Government’s objective. The Coalition claims, however, that its direct-action policies are cheaper and have less adverse economic effects than using the carbon tax and/or renewable energy sources in place of coal and oil.

Whether or not the Coalition’s direct-action approach could reduce Australian emissions by 20% by 2020 is open to doubt. But leaving that aside, it now has an opportunity to announce a major change in policy on the global warming thesis. While it would be politically difficult, both internally and externally, to announce an outright rejection to that thesis, three developments since Abbott’s adoption of an anti-carbon tax policy provide a strong basis for abandoning the 20% target.

First, as the following graph shows, average global temperatures have not increased since 1997 – that is, for about 15 years. This graph is rarely shown to the public by Australian media and there is even less in the way of explanations of the possible causes of earlier changes, including the gently decreasing temperatures from 1950 to 1976. Yet the increase of about 0.6 degrees which occurred between 1977 and 1997 reflected increased ocean-surface temperatures in the Pacific and Atlantic that had little or nothing to do with CO2 emissions but was in response to natural changes affecting the oceans. The slight upward trend in temperatures since the end of the little ice age, about 1850, was an only-to-be-expected natural occurrence.

In the present context, the key point is that the behaviour of temperatures since 1950 provides no sound basis for expecting that further increases are likely to be dangerous and require urgent countervailing action by governments. 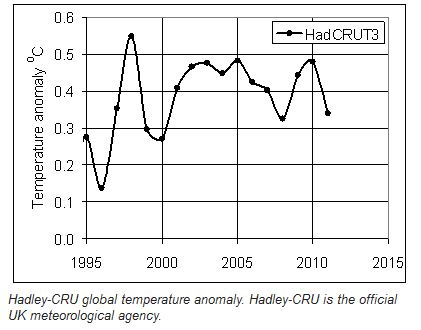 Second, the much reduced concern about the trend in temperatures is supported by developments in scientific analysis. Although a bevy of climate scientists continues to support the view that temperatures will increase to dangerous levels due to the supposed greenhouse effect from emissions accumulated in the atmosphere, an increasing number of reputable scientists have pointed to the many uncertainties in this thesis. In particular, there are periods, including the most recent one, when temperatures have not increased even though emissions have done so, as well as counter examples that have seen temperatures increase even though emissions did not.

There is also now a wider recognition of the important influence on temperatures by the oceans, which cover 70% of the surface of the earth. Changes in CO2, humidity and methane can all be influenced by changes in the sea-surface temperature. Such changes do not appear to be related to emissions.

Third, by contrast with two-three years ago, there is now no prospect in the foreseeable future of any enforceable international agreement being reached between major emitting countries on substantive reductions in emissions. Significantly, neither candidate in the Presidential election in the US has even mentioned climate change. This reflects the recent experience with temperatures as well as the recognition that there are greater uncertainties in the science than previously thought.  In these circumstances the Coalition would be well justified in substantially revising its policy on reducing emissions.

In short, the developments outlined provide scope for the Coalition not to completely abandon government action directed at reducing CO2 emissions but to markedly reduce any action, including by eliminating the carbon tax, and to spread such action over a much longer period than the next eight years. Such a revised policy would be subject to review if the possibility of a meaningful international agreement were to develop.

Des Moore is director of the Institute for Private Enterprise and a former Deputy Secretary, Treasury