He accused Opposition Leader Tony Abbott of having a “racist climate change policy” in a speech at the National Press Club. Abbott’s warning that businesses forced to buy offshore carbon permits under the government’s emissions trading scheme could be exploited was, Combet said, “economic xenophobia”.

Abbott was sending a “signal that it’s somehow dubious to trade with foreigners”. He “was trashing the commitment that’s existed for many years on both sides of politics to economic liberalisation and open trade.” If carbon (dioxide) emissions permits could not be purchased from offshore issuers, Combet warned the CCCCC’s carbon (dioxide) price would have to double to $46 a tonne.

Had Combet been frank, he would have lifted the lid further on this murky brew. He would have explained precisely why Australia will have to pay about $60 billion annually to unidentified foreign entities by 2050 merely for the right to burn its own coal and to keep the nation’s lights on, and a cumulative $650 billion up to that date.

“The permits will be bought from sellers that don’t yet exist, in markets that have yet to be formed, although the Government expects – hopes – they will develop over the next few years,” noted Terry McCrann. “Even without any rorting, the impact on the economy of this part of the scheme will be exactly like taking $650 billion out and shredding it.”

Whether there is a racial dimension to climate change politics is debatable. What is clear, however, Combet’s free trade and clean energy rhetoric was designed to deflect deeper scrutiny of Australia’s future international carbon (dioxide) permit purchase obligations, a key element of the CCCCC’s carbon (dioxide) emissions “reduction” strategy from 2015, when the domestic carbon price will be set by the market.

How did we get to this point? When did "climate change" become the dodgy rationale for wealth transfer on such an unprecedented scale from the developed world (haves) to the developing world (have-nots)? The answer: ever since the 1992 United Nations Framework Convention on Climate Change codified notions of “dangerous” climate change, “climate debt” and “precautionary” action, UN bureaucracies have been moving slowly – but inevitably – towards today’s highly politicised end-game.

The Intergovernmental Panel on Climate Change was formed in 1988 by the United Nations Environment Programme (UNEP) and UN World Meteorological Organization (WMO). The IPCC has given alarmist momentum to the climate juggernaut ever since its creation. The UNFCCC annual Conference of the Parties now attracts thousands of delegates from 192 countries. COP 17, the seventeenth session, will be held in Durban, South Africa, from 28 November to 9 December this year.

Climate debt: A theoretical concept with two elements: Adaptation Debt – compensation owed to the poor for the damages of climate change they have not caused; and Emissions Debt – compensation owed for their fair share of the atmospheric space they cannot use if climate change is to be stopped. Submitted to UNFCCC by over fifty countries including Bolivia, Bhutan, Malaysia, Micronesia, Sri Lanka, Paraguay, Venezuela and the Group of Least Developed Countries, representing 49 of the world’s poorest and most vulnerable countries.

The UNFCCC, then, was established two decades ago with this objective – to prevent "dangerous" human interference with the Earth’s climate. Under Article 3.1 of its Principles, the Parties “should protect the climate system for the benefit of present and future generations of humankind, on the basis of equity and in accordance with their common but differentiated responsibilities and respective capabilities.”

Its mantra is that collective global action can stabilise greenhouse gas concentration levels at about either 550 parts per million or 450ppm by about 2100, thereby meeting the Copenhagen (COP-15) objective of limiting global warming to below 2C above preindustrial levels; an objective based on controversial assumptions about the precise relationship between human-generated GHC levels and global surface temperature.

Uncertainty, however, has never a problem for either UNFCCC or the IPCC. If in doubt, use the (pseudo-scientific) precautionary principle to justify a preferred course of action.

Article 3.3: The Parties should take precautionary measures to anticipate, prevent or minimize the causes of climate change and mitigate its adverse effects. Where there are threats of serious or irreversible damage lack of full scientific certainty should not be used as a reason for postponing such measures.

Little wonder more folk are asking – with climate scientist, Judith Curry – whether “early articulation of a preferred policy option by the UNFCCC” entrenched a lucrative (for many) “feedback loop between politics, science, and science funding that accelerated the science (and its assessment by the IPCC) towards the policy option (CO2 stabilization) that was codified by the UNFCCC,” leading to “an overconfident assessment of the importance of greenhouse gases in future climate change”?

When an accurate history of the UN’s long pas de deux with climate change alarmism is written, readers will be struck by how eagerly – and prematurely – the developing world (and other players) embraced it, years before the IPCC and its researchers ruled the science was “settled”. It will be a case study in the politicisation of science and entrenchment of confirmation bias on a grand scale. It will reveal how the promise of treasure at the end of the atmospheric rainbow ensured too many so-called “facts” became “theory-laden” with anthropogenic global warming, carbonorexia nervosa and so on.

In his 2008 BC (Before Copenhagen) Review, Ross Garnaut concluded the international response to climate change was “too slow and patchy to be effective. Discussion was “conducted at an abstract level, and outside any requirements that numbers being discussed ‘add up’ to a global solution.” There were, he warned, “times in the history of humanity when fateful decisions must be made”. Strong action on climate change was one of them.

“If things go well, very well, Copenhagen will be the end of one process.” However, “if things go badly, they could go very badly. When human society receives a large shock to its established patterns of life, things fall apart.” Failure “would lead to consequences that would haunt humanity until the end of time.”

Are things falling apart, or approaching a tipping point? Even Garnaut’s 2011 Update noted “the Copenhagen and Cancun meetings have led us into a messy world in relation to the setting of each country‘s ambitions on emissions reductions.”

With only three months to COP-17, things are getting messier. Rumour has it that UNFCC’s agenda has been “drifting” in recent months. With a global recession looming and turmoil in the Middle East, climate change is slipping down the world’s list of critical issues. The prospect of massive cross-border flows of “climate debt” to the developing world is receding too, as much of the developed world faces up to its own (self-induced) debt crisis.

Meanwhile, a report by William Alexander, Professor Emeritus at the University of Pretoria’s Department of Civil Engineering, is urging COP-17 host, South Africa, to appoint a high level, independent, multidisciplinary Commission of Enquiry into climate science, under the Budapest Declaration on Science and the Use of Scientific knowledge.

The developed world, Alexander argues, will soon face an angry backlash when its citizens discover “costly emissions control measures and taxes are based on deliberately manipulated science”; and see “the rest of the world is unlikely to follow their suicidal example. Scientists could play an important role by demonstrating the false basis of climate change theory, so removing it from the international agenda.”

But why did United Nations Secretary General, Ban Ki-Moon, suddenly pop up in Australia last weekend? Why did he visit Foreign Minister Rudd at his home, before meeting Prime Minister Gillard at Parliament House two kilometres away; jetting off to the Solomon Islands several hours later?  Was Mr Ban applying the precautionary principle while in Canberra’s toxic political atmosphere? Armchair sleuths and CCCCC watchers apply Sherlock Holmes’s axiom: “the little things are infinitely the most important”.

Did Kevin and Ki-Moon discuss only the unfolding situation in Libya and the Horn of Africa’s humanitarian crisis during their forty-minute meeting?  Perhaps monetising atmospheric carbon dioxide, creating a domestic “carbon price” and becoming a carbon cash-cowboy in the UN’s emissions permit/climate debt game was mentioned too? It would surely improve Australia’s chances of winning a few regional votes, and ultimately a seat on the UN Security Council? Hence Mr Ban’s parting comment: "You may be known as Down Under, but when it comes to contribution and commitment, you are well above and beyond”? 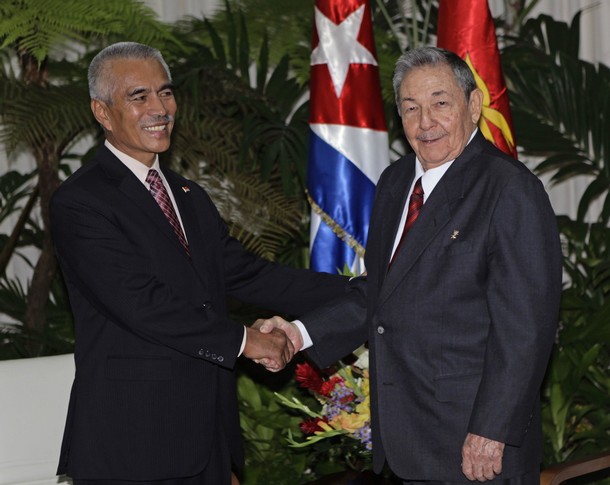 He will meet the island nation’s President, Anote Tong, pictured here shaking hands with Raul Castro at Havana’s Revolution Palace, during an official visit last December. Cuba is a keen supporter of Kiribati’s – and the UN’s – climate debt ambitions.

According to the UN News Centre, one of Mr Ban’s goals will be “to continue sounding the alarm about climate change”. So expect to hear more apocalyptic “the-clock-is-ticking” warnings in the days and weeks ahead. He will be trying to resuscitate fading international concern, and urging Pacific Island countries “to continue to raise their voices on (dangerous) climate change”. They are “on the front lines of this global threat” and “know first-hand the destructive potential of rising sea levels”, etc.

A new expression recently appeared in the alarmist lexicon: “climate resilience”. If a country wants UN funding for a project today, its chance of success will be improved greatly by appealing to this vague, unquantifiable and corruptible concept. Coinciding with Mr Ban’s visit to the region, the European Commission announced last Sunday an 11.4 million euro climate resilience project to help the nine “most vulnerable” Pacific small island states “in their efforts to tackle the adverse effects of climate change”.

No surprise, then, that EU president, Jose Manuel Barroso, and climate commissioner, Connie Hedegaard, also visited Australia. Desperate to validate the EU’s carbon (dioxide) trading scheme by bringing another country into its game, they are urging the government to legislate an ETS. Yet Europol, the EU police agency, reported last month that fraudulent trading was widespread, costing taxpayers up to €5 billion ($7,000 million) in lost revenue in 18 months.

Australia,, incidentally, has donated at least $40 million already to a World Bank Pilot Program for Climate Resilience, which is part of Bank’s Strategic Climate Fund activities “aimed at a specific climate change challenge or sectoral response”. The PPCR’s objectives include strengthening capacities “to integrate climate resilience into development planning” and enabling “learning-by-doing and sharing of lessons at country, regional and global levels”.

Mr Ban will have more meetings this week with our learning-by-doing Prime Minister, just as the CCCCC tries again to sell its carbon tax to increasingly sceptical voters. Given the UNFCCC’s approach to situations where there are potential threats of serious or irreversible damage, and in the interest of world peace, the Director- General’s briefing papers presumably will heed the precautionary principle and include this advice: “Don’t mention Nauru – or climate debt!”