Just when you thought is was safe to spend a few carbon-free hours relaxing with your computer, up pops another climate-nark, all fired up to wreck your day and attempt to make you feel as guilty as hell for being alive. The latest effort is by someone called Alex Roslin, writing in an article that appeared in The Vancouver Sun—“Could the Net be killing the planet, one web search at a time?” — and answering — YES!

Let’s make this perfectly clear. As you read these words you are, according to Alex, destroying life on Earth as we know it. He says “Depending on how long you took and what sites you visited, your search caused the emission of one to 10 grams of carbon [dioxide] into the atmosphere, contributing to global warming. Gee whizz! Escape, Control, Command … now.

Alex adds up the one billion daily Google searches, 60 million Facebook hits, 50 million daily tweets and the 250 million daily emails per day and then states “If the Internet was a country, it would be the planet’s fifth-biggest consumer of power ahead of India and Germany”. Alex quotes Mohamed Cheriet, a Green IT expert and professor in engineering and automation at Montreal’s Ecole de Technologie Superieure, who says

The internet pollutes, but people don’t understand why it pollutes. It’s very, very power hungry, and we have to reduce it’s carbon [dioxide] footprint.

So there you have it, once again. The Green campaign to drastically reduce or shut down just about every facet of modern life we enjoy and the advancement that third-world countries are striving to achieve. Heating, cooling, lighting, accommodation, food, clothing, transportation and communications—oh, and employment!

The insanity progresses unabated. This Sunday the Discovery Channel (UK) will present a TV series called “Ways to Save the Planet” — apparently from catastrophic global warming.  And apparently totally unimpressed with Julia Gillard’s carbon dioxide tax, the Discovery Channel has rounded up eight “geo-engineering” scientists who have ideas to interfere with the world’s “delicate ecosystems”. Emmmm! Sounds like a thoroughly bad idea, but with what we have experienced in the last decade with rampant science stormtroopers pounding our brains with guilt-bombs, what else can you expect. Well…plenty!

One scientist in the Discovery Channel show, glaciologist Dr Jason Box, suggests we wrap up Greenland in a gigantic blanket to slow ice-melt. Another scientist, Dr Brian von Herzen suggests that using giant wave-powered pumps to mix cold deep ocean water with warmer surface water, we can create plankton blooms to absorbs atmospheric carbon dioxide. Professor Roger Angel wants to place a 100,000 square mile sunshade in space. The sun-shade would contain trillions of lenses that would reduce the sun’s power by 2%.

By way of a commercial break. Easter Island in the South Pacific is an interesting place with it’s 887 huge stone statues, all staring forlornly out to sea. According to one theory there were two classes of people on Easter Island, the Short Ears and the Long Ears. The Short ears were enslaved by the Long Ears who forced the Short Ears carve and erect the statues. One wonders what strange edifices will litter the planet in a hundred years hence.

Meanwhile, back to the “big ideas” on the Discovery Channel.

Canadian Fred Ferguson, who specialises in airships has designed a wind turbine that will float at about 1000 feet up and use the constant winds that blow at that height. People who hate the despoiling affect of land-based wind turbines will now be able to look up at a sky covered with clean-energy producing airships.

According to London’s The Telegraph which reported the up-coming TV series, another plan is to create clouds by sending salt into the atmosphere—to “protect” the world from sunshine. David Keith, the 2006 Canadian Environmental Scientist of the Year believes he can create a machine that sucks in ambient air and sprays it with sodium hydroxide, which then expels clean air. Why on Earth has no one thought of such a machine for the world’s power stations is a great mystery?

Without doubt though the story of the week is the plan by an Australian company to shoot outback camels and claim a negotiable “carbon credit” for the deed. 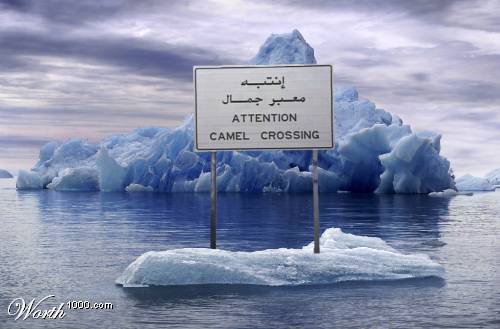 According to London’s Financial Times camels produce about one ton of Co2 per year—about the same as a family car that does 20,000 km per year. Or one airline passenger flying about 7,000 kilometre. According to Dr Moore, the company’s spokesman, all “removals” [shooting] will be done by “animal welfare trained and accredited marksmen”.

Dr Moore added “If everyone knew what they [the camels] were doing, people would be more concerned … especially when they come into town and kick down your toilet”. No doubt, saving the toilets of outback Australia is an additional carbon dioxide/methane saving benefit. And yes, when you shoot the camel, apart from the carbon-credit you get the meat from the dead camel. It’s a win-win situation as climateers like to say — that is except for the poor sodding camel.

Just when you thought the week couldn’t get any crazier along comes the Danes, of recent Copenhagen memory. They plan to build a waste disposal-electricity generating plant that blows out smoke-rings from its chimney and is designed with an exterior that is also a ski slope.

Going for a picnic? Don’t forget to shoot a camel first.

The Burning Intolerance of Green Scolds